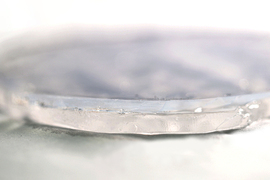 ↓ Download Image
Caption: MIT researchers have developed a two-layer passive cooling system, made of hydrogel and aerogel, that can keep foods and pharmaceuticals cool for days without the need for electricity. In this photo showing a close-up of the two-layer material, the upper layer consists of aerogel and the bottom layer of hydrogel.
Credits: Courtesy of the researchers

Caption:
MIT researchers have developed a two-layer passive cooling system, made of hydrogel and aerogel, that can keep foods and pharmaceuticals cool for days without the need for electricity. In this photo showing a close-up of the two-layer material, the upper layer consists of aerogel and the bottom layer of hydrogel.
Credits:
Courtesy of the researchers

Camels have evolved a seemingly counterintuitive approach to keeping cool while conserving water in a scorching desert environment: They have a thick coat of insulating fur. Applying essentially the same approach, researchers at MIT have now developed a system that could help keep things like pharmaceuticals or fresh produce cool in hot environments, without the need for a power supply.

Most people wouldn’t think of wearing a camel-hair coat on a hot summer’s day, but in fact many desert-dwelling people do tend to wear heavy outer garments, for essentially the same reason. It turns out that a camel’s coat, or a person’s clothing, can help to reduce loss of moisture while at the same time allowing enough sweat evaporation to provide a cooling effect. Tests have showed that a shaved camel loses 50 percent more moisture than an unshaved one, under identical conditions, the researchers say.

The new system developed by MIT engineers uses a two-layer material to achieve a similar effect. The material’s bottom layer, substituting for sweat glands, consists of hydrogel, a gelatin-like substance that consists mostly of water, contained in a sponge-like matrix from which the water can easily evaporate. This is then covered with an upper layer of aerogel, playing the part of fur by keeping out the external heat while allowing the vapor to pass through.

Hydrogels are already used for some cooling applications, but field tests and detailed analysis have shown that this new two-layer material, less than a half-inch thick, can provide cooling of more than 7 degrees Celsius for five times longer than the hydrogel alone — more than eight days versus less than two.

The findings are being reported today in a paper in the journal Joule, by MIT postdoc Zhengmao Lu, graduate students Elise Strobach and Ningxin Chen, Research Scientist Nicola Ferralis and Professor Jeffrey Grossman, head of the Department of Materials Science and Engineering.

The system, the researchers say, could be used for food packaging to preserve freshness and open up greater distribution options for farmers to sell their perishable crops. It could also allow medicines such as vaccines to be kept safely as they are delivered to remote locations. In addition to providing cooling, the passive system, powered purely by heat, can reduce the variations in temperature that the goods experience, eliminating spikes that can accelerate spoilage.

Ferralis explains that such packaging materials could provide constant protection of perishable foods or drugs all the way from the farm or factory, through the distribution chain, and all the way to the consumer’s home. In contrast, existing systems that rely on refrigerated trucks or storage facilities may leave gaps where temperature spikes can happen during loading and unloading. “What happens in just a couple of hours can be very detrimental to some perishable foods,” he says.

The basic raw materials involved in the two-layer system are inexpensive — the aerogel is made of silica, which is essentially beach sand, cheap and abundant. But the processing equipment for making the aerogel is large and expensive, so that aspect will require further development in order to scale up the system for useful applications. But at least one startup company is already working on developing such large-scale processing to use the material to make thermally insulating windows.

The basic principle of using the evaporation of water to provide a cooling effect has been used for centuries in one form or another, including the use of double-pot systems for food preservation. These use two clay pots, one inside the other, with a layer of wet sand in between. Water evaporates from the sand out through the outer pot, leaving the inner pot cooler. But the idea of combining such evaporative cooling with an insulating layer, as camels and some other desert animals do, has not really been applied to human-designed cooling systems before.

For applications such as food packaging, the transparency of the hydrogel and aerogel materials is important, allowing the condition of the food to be clearly seen through the package. But for other applications such as pharmaceuticals or space cooling, an opaque insulating layer could be used instead, providing even more options for the design of materials for specific uses, says Lu, who was the paper’s lead author.

The hydrogel material is composed of 97 percent water, which gradually evaporates away. In the experimental setup, it took 200 hours for a 5-millimeter layer of hydrogel, covered with 5 millimeters of aerogel, to lose all its moisture, compared to 40 hours for the bare hydrogel. The two-layered material’s cooling level was slightly less — a reduction of 7 degrees Celsius (about 12.6 degrees Fahrenheit) versus 8 C (14.4 F) — but the effect was much longer-lasting. Once the moisture is gone from the hydrogel, the material can then be recharged with water so the cycle can begin again.

Especially in developing countries where access to electricity is often limited, Lu says, such materials could be of great benefit. “Because this passive cooling approach does not rely on electricity at all, this gives you a good pathway for storage and distribution of those perishable products in general,” he says.

Popular Mechanics reporter Kyro Mitchell spotlights how MIT researchers have created a new material, inspired by camel fur, that could be used to help insulate food and medical supplies. “Field tests on the new material show that it can provide cooling of more than seven degrees Celsius,” writes Mitchell. “It can also maintain that low temperature for five times longer than using hydrogel alone.”

Smithsonian reporter Corryn Wetzel spotlights how MIT researchers have developed a new technology inspired by camel fur that could be used to keep food and medical supplies chilled. The researchers hope the new system could be applied to “lots of areas that require passive cooling—meaning no external energy needs to power the process. Possible applications include insulating food storage, medical supplies and buildings.”

MIT researchers have created a new material that mimics camel fur and could be used to help keep food and medical supplies cool without electricity, reports Layal Liverpool for New Scientist. “We achieve evaporation and insulation at the same time, extending the cooling period significantly,” explains Prof. Jeffrey Grossman.

Saving heat until you need it