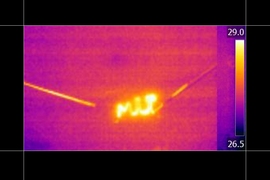 ↓ Download Image
Caption: Infrared (heat) image shows a heating device made from steam-cracked tar, annealed with a laser, which was formed into an MIT logo to demonstrate the controllability of the process.
Credits: Image: Courtesy of the researchers

Caption:
Infrared (heat) image shows a heating device made from steam-cracked tar, annealed with a laser, which was formed into an MIT logo to demonstrate the controllability of the process.
Credits:
Image: Courtesy of the researchers

Tar, the everyday material that seals seams in our roofs and driveways, has an unexpected and unappreciated complexity, according to an MIT research team: It might someday be useful as a raw material for a variety of high-tech devices including energy storage systems, thermally active coatings, and electronic sensors.

And it’s not just tar. Professor Jeffrey Grossman has a very different view of other fossil fuels as well. Rather than using these materials as cheap commodities to burn up, seal cracks with, or dispose of, he sees potential for a wide variety of applications that take advantage of the highly complex chemistry embedded in these ancient mixtures of biomass-derived carbon compounds.

A significant benefit of such applications is that they provide a way to repurpose materials that would otherwise be burned, adding to greenhouse gas emissions, or disposed of in landfills. These uses could lead to a “greening” of otherwise climate-damaging coal and other carbon-based materials, Grossman says.

In his latest research, Grossman, along with postdoc Xining Zang, research scientist Nicola Ferralis, and five others, found ways to use coal, tar, and pitch to produce thin coatings with highly controllable and reproducible electrical conductivity, porosity, and other properties. Using a laser, they were able make prototype devices from the inexpensive, ubiquitous materials, including a supercapacitor to store electricity, a flexible strain gauge, and a transparent heater.

The work, described in the journal Science Advances, explores alternative ways of using carbonaceous heavy hydrocarbons, which have formed over millions of years of geological processing of decayed plant matter through heat and pressure. These materials, Grossman says, provide a rich variety of atomic configurations with different chemical and structural properties, unmatched by any synthetic, processed carbon-based nanomaterials.

To make use of these material properties, the team used a process called laser annealing to create ultrathin layers of carbonaceous materials, deposited on a substrate. They produced specific functional devices by depositing and etching patterns in layers made of different carbon-based materials.

In a sense, what the team did is the inverse of traditional processing of fossil fuels, in which the complex mix of hydrocarbons undergoes stage after stage of breaking down chemical bonds and separating out different compounds. In this work, the various kinds of heavy hydrocarbon complexes were used just as they are, making use of the wide variety of properties to be found in the different materials — types of coal, petroleum steam cracked tar, and mesophase pitch, most of which are either byproducts that typically need to be disposed of or fuels that are rapidly being phased out.

Through a combination of selecting just the right feedstock material and varying the timing and strength of laser pulses used to anneal the material, the team was able to control a range of physical, optical, electrical, magnetic, and other properties. By combining different materials, they say, a whole range of devices could be produced at once on a single substrate.

“We can then create everything from graphene to some sort of aromatic rich polymers,” says Ferralis, “and with properties that could change widely, from being thermal and electrical insulators, to thermal and electric conductors. We can change porosity, so that allows us not only to create solid films, but also to create materials that are highly porous, so we can actually make membranes.”

This assortment of material properties can be mixed and matched, perhaps enabling, for example, the creation a variety of carbonaceous “inks” for 3D printing, he says.

“But rather than changing the colors,” Ferralis says, “you actually change the type of precursor you make. You add a little more tar, a little less pitch, or a little more of any of the other things that we highlighted in the paper. That could give, for example, the ability to make, within the same film, a membrane, an electrical device, and an energy storage system, and so on and so forth, on demand.”

The materials can be virtually any kind of heavy hydrocarbon, many of which exist in great abundance as waste products from petroleum production or chemical processing. “Essentially what we’re looking for is any material that it’s heavy in aromatics, meaning heavy hydrocarbons that people don't know what to do with it,” Zang says. “So we are pretty agnostic about what we can use.”

By using precisely timed and tuned pulses from a carbon dioxide laser, the team was able to control the properties of the coated material, blasting it with pulses that could generate highly localized temperatures as high as 2,000 degrees Celsius, while leaving surrounding areas so unaffected that the process could be carried out even on soft substrates such as plastics, they say.

“We have this highly heterogeneous, messy feedstock,” says Grossman, “but it’s so cheap and rich with useful chemistry.” The idea is to understand it well enough to be able to “apply simple, scalable manufacturing tools so that we can take advantage of this understanding to make it do something different for us.” In a nutshell, he says, “we’re finding this material that was previously thought of as limited in its use (as only a fuel to burn, for example), and by understanding its atomic structure, we're able to apply principles of materials design and engineering to make it useful in broader ways.”

While this initial work focused on thin films, the raw materials are so inexpensive that ultimately such materials might also be used for bulk applications, Ferralis says. “If we can scale up this process to bulk systems, this might be used in structural materials, for example, or insulation for homes. Stuff that actually requires a lot of the material.” It might even provide an economic boost for coal-producing regions now suffering from the collapse of the coal-powered electric power plant industry to become producers of a whole new family of higher-value products, he suggests.

The research team also included C. Jian at York University in Canada, S. Ingersoll and Z. Lu at MIT, Huashan Li at Sun Yat Sen University in China, J.J. Adams at the Western Research Institute, in Wyoming, and Z. Lu. The work was supported by ExxonMobil and the Natural Sciences and Engineering Research Council of Canada.

A team of MIT researchers has uncovered a variety of new ways to use heavy hydrocarbons such as coal, tar and pitch to make new devices, reports Caroline Delbert for Popular Mechanics. Delbert writes that the findings demonstrate how, “a less oil-reliant future offers an opportunity to study these complex chemicals more close up than ever before.”

Making electronics out of coal

Saving heat until you need it