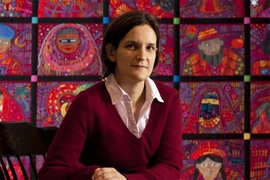 Esther Duflo PhD ’99, the Abdul Latif Jameel Professor of Poverty Alleviation and Development Economics at MIT, will be the guest speaker at the 2020 Investiture of Doctoral Hoods and Degree Conferral Ceremony on Thursday, May 28.

“Professor Duflo is an impressive and inspiring leader — someone whose brilliant insight and relentless hard work have improved the lives of millions of people in poverty,” says Chancellor Cynthia Barnhart, host of the ceremony. “I have no doubt that hearing about her research and journey to the Nobel Prize — a path that was marked by hands-on problem-solving, collaboration, and selflessness — will capture the imaginations of our doctoral graduates. Her story will remind them of the impact MIT community members can have when we apply our minds, hands, and hearts to solving society’s most pressing challenges.”

Duflo, known for her leadership and innovation in development economics, is a faculty member in the MIT Department of Economics, as well as co-founder and co-director of the Abdul Latif Jameel Poverty Action Lab (J-PAL). She is the second woman and the youngest person ever to receive the Nobel Prize in economic sciences.

In her Nobel speech, given in December 2019 and titled “Field experiments and the practice of economics,” Duflo framed her own work to understand the economic lives of the poor in the context of a movement that leverages research in guiding social policy. She lauded the worldwide J-PAL network of antipoverty researchers, whose rigorous collection and evaluation of data has led to affecting policy in Africa, Asia, Europe, North America, and South America. Duflo — whose early ambitions included becoming a “changemaker” — said she hopes that J-PAL’s influence will foment a self-sustaining culture of learning within governments.

The guest speaker is selected by a working group of doctoral students, from among nominees who hold a PhD or ScD from MIT. The group was unanimous and enthusiastic about Duflo’s nomination. Lily Bui, who will graduate in May with a PhD in urban studies and planning, participated in this year’s selection process. “Our committee is thrilled that Dr. Duflo will be our speaker,” she says. “We look forward to the wisdom that she will impart from both her extraordinary professional and personal experiences.”

Following her study of history and economics at École Normale Supérieure in Paris, Duflo came to MIT, earning a PhD in economics and joining the faculty in 1999. The extraordinary list of her academic honors and prizes include the Princess of Asturias Award for Social Sciences (2015), the A.SK Social Science Award (2015), Infosys Prize (2014), the David N. Kershaw Award (2011), a John Bates Clark Medal (2010), and a MacArthur “Genius Grant” Fellowship (2009). With Abhijit Banerjee, the Ford International Professor of Economics at MIT, she wrote “Good Economics for Hard Times” (2019) and “Poor Economics: A Radical Rethinking of the Way to Fight Global Poverty” (2011), the latter of which won the Financial Times and Goldman Sachs Business Book of the Year Award in 2011 and has been translated into more than 17 languages. Duflo is the editor of the American Economic Review, a member of the National Academy of Sciences, and a Corresponding Fellow of the British Academy.

Duflo’s passionate commitment to research toward the betterment of humankind led her to a momentous choice: She and co-laureates Banerjee and Professor Michael Kremer of Harvard University made news again in December 2019 for the decision to donate their combined Nobel prize money to support grants sponsored by the Weiss Fund for Research in Development Economics. The Associated Press reported that Duflo was inspired in this gift by Marie Curie, who used her Nobel money to buy a gram of radium for research. The three professors’ donation to the Weiss Fund will support development economics for years to come.

Nancy Rose, head of the MIT Department of Economics and the Charles P. Kindleberger Professor of Applied Economics, praised Duflo’s teaching and her relationships with MIT students. She commented, “Esther is not only an extraordinary scholar and educator, but a much-loved mentor and advisor for generations of students. As MIT’s first alumna to be recognized with the Nobel Prize, I can think of no finer choice to acknowledge the promise of our current graduates and to inspire them on the launch of their careers.”

The 2020 Investiture of Doctoral Hoods and Degree Conferral Ceremony will take place on Thursday, May 28 at 10:30 a.m. on Killian Court. The ceremony is open to family, friends, and mentors of doctoral candidates; no tickets are required.