Retired Navy four-star admiral and former chancellor of University of Texas system will address the Class of 2020 on May 29.
MIT News Office
Publication Date:
Press Inquiries 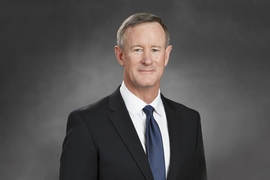 Admiral William H. McRaven, a retired U.S. Navy four-star admiral and the former chancellor of the University of Texas system, will deliver the address at MIT’s 2020 Commencement exercises on Friday, May 29.

McRaven is a recognized authority on U.S. foreign policy who advised presidents George W. Bush and Barack Obama on defense issues. As the chancellor of the University of Texas system from 2015 to 2018, he led one of the nation’s largest systems of higher education, with 14 institutions that educated 220,000 students and employed 20,000 faculty and more than 80,000 health care professionals, researchers, and staff.

McRaven recently co-chaired an independent task force, charged by the Council on Foreign Relations, on innovation and national security. Among its recommendations, the task force encourages the U.S. government to invest in scholarships and modify immigration policies to enable the country’s universities to attract and educate the world’s most dynamic talent. A passionate advocate for freedom of the press, McRaven has authored prominent opinion pieces on current affairs — in 2018 in The Washington Post  and in 2019 in The New York Times.

During his 37 years in the military, McRaven commanded special operations forces at every level, eventually serving as the ninth commander of the U.S. Special Operations Command from 2011 to 2014. He led the rescue of Captain Richard Phillips, who was held hostage by Somali pirates after the 2009 hijacking of the MV Maersk Alabama in the Gulf of Aden. He is also credited with developing the plan and leading the mission that led to the 2011 death of Osama bin Laden. His honors include the Intrepid Freedom Award for distinguished service in defending the values of democracy, awarded in 2015, and the Judge William H. Webster Distinguished Service Award for a lifetime of service to the nation, awarded in 2018.

“From firsthand experience, I have come to admire Admiral McRaven’s integrity, intellectual curiosity, decency, humility, and self-discipline. A brilliant problem solver with deeply held values and the courage to speak boldly for his principles, he will fit right in at MIT,” MIT President L. Rafael Reif says. “We look forward to welcoming him.”

“I am so very honored to have the opportunity to address the MIT graduating class of 2020,” says McRaven. “More than ever before, the world today needs the great minds of the talented men and women that have learned so much from this magnificent institution. I hope that my experience, in both the military and academia, will be of some value to them as they head off to make their mark in the world.”

“We are intrigued to hear what Admiral McRaven has to share with MIT’s graduates,” says Graduate Student Council President Peter Su. “His background in military service and university administration provides an interesting perspective.”

“We are delighted to welcome Admiral McRaven to MIT as our Commencement speaker,” says Chancellor for Academic Advancement Eric Grimson, the longstanding chair of the Commencement Committee. “His record of vocal support for free speech, of seeking principled approaches to difficult situations, and of fostering effective teamwork should serve as a wonderful example to our graduates as they seek to make their own impact on the world.”

The AP reports that William McRaven, a retired U.S. Navy admiral and former chancellor of the University of Texas system, has been selected to deliver MIT’s 2020 Commencement address. “McRaven was head of U.S. Special Operations Command in 2011 when a team of Navy SEALs killed the al-Qaida leader in Pakistan,” the AP notes.