Performer who gained fame for his portrayal of a brilliant MIT janitor will address the Class of 2016.
Steve Bradt | MIT News Office
Publication Date:
Press Inquiries 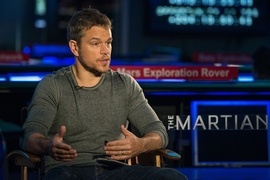 Actor, filmmaker, social activist, and Cambridge native Matt Damon — who shot to prominence with his portrayal of a mathematically gifted MIT janitor in the 1997 film “Good Will Hunting” — will “return” to the Institute to deliver the address at MIT’s 2016 Commencement exercises on Friday, June 3.

Damon, who won an Academy Award and a Golden Globe Award for co-writing the screenplay of “Good Will Hunting” with Ben Affleck, went on from his breakout role as Will Hunting to become one of the most versatile and popular actors of our time. He has portrayed an astronaut stranded on Mars in this fall’s critically acclaimed hit “The Martian,” a World War II soldier trapped in France in “Saving Private Ryan” (1998), and a deranged liar in the 1999 psychological thriller “The Talented Mr. Ripley.”

Almost a decade ago, Damon’s passion for finding practical paths to social and environmental justice led him to found the pioneering H2O Africa Foundation and its successor Water.org, which helps communities in the developing world gain access to safe drinking water and sanitation. In 2008, he co-founded the Not On Our Watch Project to draw attention to global atrocities and genocides. He has also worked on behalf of ONEXONE, a nonprofit that aims to improve the lives of children worldwide, and the ONE Campaign, which fights poverty and preventable disease, especially in Africa.

“I am thrilled that Mr. Damon will be with us at Commencement,” MIT President L. Rafael Reif says. “Through his art, this son of Cambridge has made us think about our world in new ways, and through his service, he has made it a better place.”

Damon is a 1988 alumnus of Cambridge Rindge and Latin School. He attended Harvard University, where he performed in student theater and in a variety of minor professional roles. Damon left Harvard in 1992, one semester short of receiving his bachelor’s degree in English, to pursue opportunities in acting.

“I am humbled and thrilled by this invitation,” Damon says. “I feel a deep affinity for MIT having grown up in the neighborhood. It’s quite an honor to be the commencement speaker at a school that I couldn't have gotten into.”

More recently, Damon was nominated for a Golden Globe for his performance in the dark 2009 comedy “The Informant!” — one of six Golden Globe nominations he has earned over the course of his career. That same year, he was nominated for the Oscar for Best Supporting Actor for his portrayal of Francois Pienaar, the captain of South Africa’s national rugby team, in “Invictus.”

“Matt Damon is eclectic — a world-renowned actor, critically acclaimed producer, and charitable humanitarian,” says Anish Punjabi, president of MIT’s Class of 2016. “More importantly, he is an inspiration to MIT students, teaching us that humility knows no bounds, and the world needs more well-rounded leaders who are passionate about improving society through one genuine act of kindness at a time.”

“I enthusiastically welcome Matt Damon as our Commencement speaker this year,” says Graduate Student Council President Michael McClellan, a PhD student in atmospheric science who conducts research in collaboration with NASA. “I cannot think of a better way to celebrate an amazing year of advances by NASA — from the stunning New Horizons photos of Pluto, to evidence of liquid water on Mars — than to have the Hollywood astronaut-in-chief of ‘The Martian’ and ‘Interstellar’ fame task our new graduates to push at all boundaries of human knowledge.”

“We are very excited to have Matt Damon as our Commencement speaker, and look forward to hearing what he imparts upon our graduates,” says Undergraduate Association President Matthew Davis.

“This is an exciting choice of speaker,” says Chancellor for Academic Advancement Eric Grimson, the longstanding chair of MIT’s Commencement Committee. “Mr. Damon couples a passion for his art with a passion for making the world a better place, much as our students couple a passion for science and technology with a passion to improve the world. I am sure his message will inspire our students to follow that passion and tackle some of the world’s great challenges, such as in water, health, or education.”

[Editor's note: As verified by Institute Archives, the 2016 Commencement exercises will mark MIT’s 139th commencement and the 149th year in which degrees have been conferred.]

Actor and Cambridge native Matt Damon will speak at MIT’s 2016 commencement, writes Steve Annear for The Boston Globe. In addition to his success in Hollywood, Annear writes that Damon “is one of the founders of Water.org, a non-profit dedicated to delivering access to clean drinking water in developing countries.”