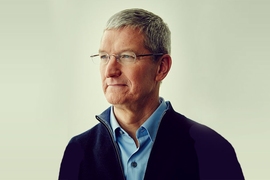 Cook joined Apple in 1998 and was named its CEO in 2011. As chief executive, he has overseen the introduction of some of Apple’s innovative and popular products, including iPhone 7 and Apple Watch. An advocate for equality and champion of the environment, Cook reminds audiences that Apple’s mission is to change the world for the better, both through its products and its policies.

“Mr. Cook’s brilliance as a business leader, his genuineness as a human being, and his passion for issues that matter to our community make his voice one that I know will resonate deeply with our graduates,” MIT President L. Rafael Reif says. “I am delighted that he will join us for Commencement and eagerly await his charge to the Class of 2017.”

Before becoming CEO, Cook was Apple’s chief operating officer, responsible for the company’s worldwide sales and operations, including management of Apple’s global supply chain, sales activities, and service and support. He also headed the Macintosh division and played a key role in the development of strategic reseller and supplier relationships, ensuring the company’s flexibility in a demanding marketplace.

“Apple stands at the intersection of liberal arts and technology, and we’re proud to have many outstanding MIT graduates on our team,” Cook says. “We believe deeply that technology can be a powerful force for good, and I’m looking forward to speaking to the Class of 2017 as they look ahead to making their own mark on the world.”

Prior to joining Apple, Cook was vice president of corporate materials at Compaq, responsible for procuring and managing product inventory. Before that, he served as chief operating officer of the Reseller Division at Intelligent Electronics.

Cook also spent 12 years with IBM, ending as director of North American fulfillment, where he led manufacturing and distribution for IBM’s personal computer company in North and Latin America.

“Tim Cook is a trailblazer and an inspiration to innovators worldwide,” says Liana Ilutzi, president of MIT’s Class of 2017. “He represents the best of the entrepreneurial and fearless spirit of the MIT community. While faithfully maintaining his integrity and humility, Tim runs one of the most influential companies on the planet. We are beyond excited to have him with us for Commencement!”

“We are looking forward to hearing Tim Cook speak at Commencement,” says Graduate Student Council President Arolyn Conwill. “We believe that his innovative leadership at Apple, along with his commitment to advocacy on sustainability, security, and equality, will inspire graduates to make a far-reaching, positive impact on the world.”

“I am delighted with the selection of Tim Cook as the Commencement speaker,” says Chancellor for Academic Advancement Eric Grimson, the longstanding chair of MIT’s Commencement Committee. “Apple is widely viewed as a company that champions innovation, that seeks creative and inventive solutions to problems across a wide range of domains, and that looks to balance technology with issues of social good. These are all themes that are of great importance to our graduates, and I am sure his remarks will be an inspiration to them.”