Economist Antoine Levy is all over the map 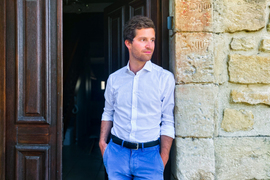 Some of the stereotypical differences between the United States and France do check out, according to Antoine Levy: The weather and the food are much worse in New England, he says, and the people are much more welcoming. But for Levy, who is about to start the fifth year of his MIT PhD program in economics, the U.S. is starting to feel like his native France in some ways.

“For a long time, I thought France was obsessed by politics and the United States was not,” he recalls. However, his impression has changed over the last five years. In France, from urban neighborhoods to small villages, he says everyone has an opinion on every government minister. Lately, he has felt a transformation around him, and has observed his peers in the U.S. becoming more interested in local politics as well.

While this may be a reflection of recent changes in the American political climate, a local perspective on policy is also a key signature of Levy’s research at MIT. Whether in France or the U.S., the economist has long been fascinated by how politics and economics converge in different ways from one region or locality to another.

All over the place

Levy’s research looks at how different sociodemographic markers within a country, such as population density, can shape economic activity and policy across these areas.

His current projects focus on harnessing the power of regional data to inform economic policy, from housing development to unemployment to political influence. For example, he has studied the Economic and Monetary Union of the E.U. after the Great Recession, in relation to the Phillips curve, which, somewhat controversially, suggests there is an inverse relationship between unemployment and wage growth. While aggregated national data do not demonstrate a clear Phillips curve, Levy has found that regional European data do follow the pattern –– indicating that policy informed by regional data might be more important than ever.

“We’ve talked a lot about political polarization, but there’s also been a massive spatial polarization over the last 25 years,” he explains. “That conjunction of economic geography and political geography has massive implications for the relative influence of places, and for the policy and politics of trade, social insurance, and redistribution.”

His latest work has been inspired by recent historical events –– Brexit, the election of Donald Trump, the “yellow vest” protests in his native France –– which have exposed the way one-size-fits-all economic policies have left behind people in vastly different geographical situations. Too often, Levy says, people rely on a mythicized idea of a region without drilling down into the patterns of population and economic behavior there. For example, in one working paper, he argues that a significant part of Emmanuel Macron’s success in the 2017 French presidential election can be attributed to a specific campaign promise to abolish a housing tax that affected 80 percent of households in the country.

A key theme in his work is how regional economics have an important influence on individuals’ political decisions — though this is often overlooked by economists.

“There’s this thing in economics where people are called agents,” Levy says. “People do stuff. People write laws, people vote, people get jobs and consume. And at some point, you have to still ask what you would do in their place.”

Taking it all in

Part of Levy’s interest in regional variations comes from personal experience. Growing up, he moved around often for his father’s work as an executive in the food industry, which took the family from the midsized city of Lyon, in the southeast, to the much smaller Périgueux, in the southwest; eventually they moved to Paris for his mother’s medical care and school. Experiencing the daily economic differences between those places, even commonplace details like the cost of coffee, have impressed upon him the way one’s economic circumstances affect one’s choices.

“The fate of places and how it’s tied to economics: I think that’s something that you get to experience very concretely when you move around,” Levy says. “Especially in a country as diverse as France.”

Levy’s penchant for variety followed him to college, where he couldn’t bring himself to choose between a more academically oriented education at École Normale Supérieure and business school at HEC Paris. In an unusual move, he ended up enrolling in both. He says he wanted to keep an eye on everything in economics –– from fundamental research to more applied areas. His embrace of interdisciplinary approaches ultimately brought him to MIT, where he appreciates how his program has allowed him to fold together his early interests in macroeconomics and international finance, and his current work on microeconomic and spatial topics.

“The professors tend to always push you to explore your interests and be very open about your interests,” Levy says of the MIT economics department, where he is advised by professors Arnaud Costinot and Ivan Werning. “They were never excessively restrictive about what I should work on or what I should study, they were always very open to hear new ideas.”

That doesn’t mean the path has always been easy, especially with the sheer time investment of a doctoral degree. “I used to be the one who wanted to experience satisfaction in the very short run,” Levy says. “Sometimes you have to slow down and go back to the beginning instead of going through a project very quickly.” To keep himself going he also takes on smaller projects, like writing short proposals, book reviews, and popular press articles.

He also takes the time to read the news or a favorite Philip Roth novel, and has fond memories of playing squash, picnicking on the Charles River, and bouncing research ideas with friends from his cohort and the French community at MIT. He has an affinity for his fellow ex-pats: “They made a choice of leaving France, and I think that’s always a sign of being ready to find out the limits of your openness.”

As he continues with his research, Levy plans to stay focused on issues that matter to the people around him, and remaining open to topics outside his expertise and immediate research field. Knowing that his work could have an impact on people’s lives keeps him passionate about economics, wherever it might take him in the future.

“It’s not something that you do for the sake of beauty,” he says of economics. “When you say you’re an economist, and you’re at the dinner table, people have tons of questions. If people have a question that they think is relevant for economics, then maybe it should be. You have to have an answer.”

Robots help some firms, even while workers across industries struggle

An innovation plan to beat Covid-19