Amid disruptions caused by the Covid-19 outbreak, the MIT community has an important role to play in the 2020 census.
Zach Winn | MIT News Office
Publication Date:
Press Inquiries 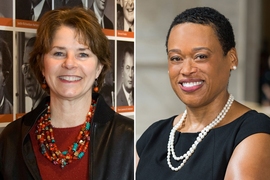 Caption:
(L-R) Amy Glasmeier, a professor in the Department of Urban Studies and Planing, and Melissa Nobles, the Kenan Sahin Dean of the School of Humanities, Arts, and Social Sciences.
Credits:
Image: Judith Daniels (Glasmeier) and Stuart Darsch (Nobles)

The year’s U.S. census is taking place at a unique time in the country’s history. Many people, including college students, are staying in their homes as a result of the Covid-19 pandemic. As a result, the Census Bureau has taken a number of steps to respond to the disruptions of the outbreak.

Students who are usually at school should be counted at school, even if they are temporarily living somewhere else due to the Covid-19 pandemic, and universities like MIT are working with census officials to count students that normally live in a dorm or other college-owned housing.

But, under official guidance, “if you live in an apartment or house alone or with roommates or others,” you should receive an invitation in the mail to respond to the census, which you can respond to online, by phone, or by mail. “Whatever method you choose,” the guidance continues, “make sure you use your normal address — where you usually live while you’re at school. You should also include anyone else who normally lives there, too. That means you’ll be asked about your roommates’ birthdays, how they want to identify their race, etc. But if you don’t know that information, or you can’t verify whether your roommate has already responded for your home, please respond for the entire household.”

Census Day is April 1, but the government strongly encourages online responses, which can be submitted here until Aug. 14 under a revised schedule. Census takers will also follow up with some households that don’t respond. Still, most things will not change for the once-a-decade-survey. By law, the Census Bureau must deliver each state’s population total to the president by Dec. 31 of this year. That’s because census data have important implications for redistricting and representation purposes.

The census is valuable for a number of other applications as well. To learn more, and to understand why members of the MIT community should participate, MIT News spoke with Melissa Nobles, the Kenan Sahin Dean of the School of Humanities, Arts, and Social Sciences, and Amy Glasmeier, a professor in the Department of Urban Studies and Planing, both of whom have used census data for important research throughout their careers.

Q: Why is the census so important?

GLASMEIER: The census is the basis of many important functions in our society. First, it helps to set the congressional districts and decide how many representatives particular geographic areas have. Second, the census is used to determine the distribution of federal resources. For example, if a region goes down to 49,000 people, it’s not considered a metropolitan area anymore and falls into a completely different [resource allocation] category. Third, it’s important at the community level. Communities are responsible for certain kinds of goods and services, and if they don’t have an accurate count of their population, they don’t have a good way of knowing what their responsibilities are. It’s incredibly important to know how many students are in your school district and the growth rate of your school district, or the growth rate of your elderly population. So the census is the statistical fabric, if you will, of our society.

NOBLES: Over the centuries, the importance of census data has grown far past representative purposes. Uses now extend to budgeting and really anything we care about in public life.

Q: Why should members of the MIT community participate?

NOBLES: The census is based on inhabitants in locations, so it’s indifferent to citizenship. It’s important for governments (federal, state, and municipal) and researchers to know that international students are here, for example, and how many people there are in their communities.

The main thrust of the census is to be counted. It asks where every inhabitant in the U.S. is on April 1, census day. It’s a relatively quick survey and it’s worth doing; it’s part of our civic duty. Our government needs reliable data — we should appreciate the importance of that, at MIT. In order to make good policies, you first need good data, so participating in the census is  part of our intellectual duty in addition to our civic duty.

GLASMEIER: Unless someone is registered to vote in their home, they’re going to be identified here as a resident in a group quarter. This kind of information is important for the city of Cambridge, because they’re making decisions about things like water supply, housing, and transportation, and it’s also important from the perspective of understanding who’s going to college. What’s their personal history? Where do they come from, from the standpoint of ethnicity, race, gender?

Q: What do you wish more people know about the census?

NOBLES: I don’t want people to be suspicious of it. There are rightly many concerns right now about data privacy, and sometimes it seems people are more fearful of the census than they are of private corporations, which often have way more personal information than the government, by the way. You can rest assured that these data are used for a range of government programs, most importantly our own democratic governance, and it’s part of living in the U.S. People should look at it as a useful tool and not be suspicious of it.

GLASMEIER: The anonymity is important. America is extremely rigorous about confidentiality across the entire census. It also sets the political environment for the nation, and it’s exceedingly important in that way. Finally, for those of us who use it for research purposes, it’s a daily thing we touch. For many others that are starting to deal with populations and think about people, the census is this amazing source they may not even know exists.