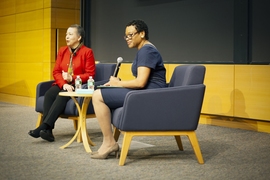 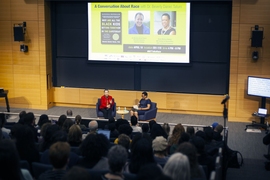 Candid discussions about race relations are vital at a time of “pushback” against social diversity in the U.S., said Beverly Daniel Tatum, the former president of Spelman College, in a talk at MIT on Thursday.

“It seems to me pretty clear we’re living in a pushback moment,” Tatum said, referring to resistance against both political progress by blacks and a diversifying population. She added: “I think that today, most people would agree, we are more polarized than ever.”

And while Tatum emphasized that there is no easy remedy for the long-running conditions of material inequality in the U.S., she suggested that a frank discussion of race relations could help pave the way for improved policies, noting that progress was needed in areas such as criminal justice reform, voting rights, housing policy, and more.

“The only way to interrupt the process is to be active,” Tatum said, speaking before an audience of over 250 people in MIT’s Wong Auditorium. “If we wait for perfection, we will never start.”

Tatum is the author of the 1997 bestseller, “Why Are All the Black Kids Sitting Together in the Cafeteria?” Recently updated in a 20th-anniversary edition, the book is the spring 2019 selection for MIT Reads, a campus-wide initiative in which community members read and discuss the same works.

Being taught to not talk

Tatum was introduced at the event by Melissa Nobles, the Kenan Sahin Dean of the School of MIT’s Humanities, Arts, and Social Sciences at MIT, and a professor of political science. Nobles praised Tatum’s “visionary leadership” at Spelman and served as an interlocutor for Tatum during the public discussion.

“There’s one key question that’s motivating this conversation this afternoon,” Nobles said. “Which is: Where are we, as a country, in having honest conversations about race and racism?”

In Tatum’s view, society is not producing as many of these conversations as it should. To demonstrate, she asked audience members to think about the first time they remember becoming aware of perceived racial differences — which, for most people in the crowd, happened before they were 10. Tatum then asked if people had, at the time, discussed the subject with adults. Few of them had.

When we do discuss race, Tatum noted, those conversations can quickly become derailed by accusations and defensiveness — particularly when people try to determine if other individuals are “racist.”

Instead, Tatum suggested an alternate description of the subject. We all have some prejudices, but the term “racism” is better left to descriptions of society-wide, institutional advantages built on a foundation of perceived ethnic difference.

“Racially-based prejudice is not the same as racism,” Tatum said. “Racism is a system.”

And, as she elaborated, “If someone says to you, ‘You are racist,’ usually the person hearing that feels like they’ve been insulted in some significant way.” As a result, Tatum said, “I find no usefulness in trying to figure out, should this person be labelled a racist, or should that person be labelled a racist? My question is: Is that person, or is any person, working to interrupt the cycle of racism?”

Politics: What is possible?

A significant portion of Thursday’s conversation also focused on the rocky political path toward racial equality in modern America. Even in recent decades, Tatum said, we have seen moments of progress, as well as times of regression.

Tatum recalled speaking at a 1997 event with then-president Bill Clinton — himself a reader of “Why Are All the Black Kids Sitting Together in the Cafeteria?” — who suggested that the political moment was promising for race relations and new policy.

However, as she pointed out, the Clinton presidency soon became sidetracked due to scandal. Before long, the terrorist attacks of September 11, 2001, meant the U.S. was no longer at peace; the economic recession of 2007-2008 then reduced the country’s prosperity.

The 2008 election of Barack Obama to the presidency represented a great advance in race relations — but also lessened the sense, among some people, that more progress was needed.

“Something happened when he was elected,” Tatum said. “And that was — victory was declared.” People began proclaiming that the U.S. has entered a “postracial” era, Tatum said, although, “Of course it became very clear during his tenure that we’re not postracial.”

Changing demographics in the U.S. have also contributed to racial unease, Tatum suggested. In 1954, the year of the Supreme Court’s landmark Brown v. Board of Education of Topeka ruling on school integration, the U.S. was ethnically about 90 percent white. As of the last census, the country was about 67 percent white, and among people age 21 and under, that figure drops to 52 percent.

“A lot of the rhetoric I think that we hear, particularly the anti-immigration rhetoric, I think is fueled by white response to that shrinking [number],” Tatum said. “Some people are disturbed by that.” Moreover, she added, “When a lot of things are changing, people feel stressed, and when they feel stressed, they tend to turn inward and get defensive, unless they’re being encouraged to be expansive. This is why leadership matters.”

What can be done?

In a question-and-answer session with the audience, Tatum responded to a variety of queries about what sorts of action could help limit structurally inequalities in a nation withover 300 million people and fractured federal politics.

“You have to think globally, and then … act locally,” Tatum said, referring to a popular environmental idea. “What’s happening in your local space that needs your attention?” At some times in the past, she aded, “Grassroots, person-to-person engagement has been shown to be the best strategy.”

Asked about the effects of social media on racial dialogues, Tatum said she was still optimistic that people can build new relationships, despite the potential for media to reinforce existing social and ideological differences.

“Certainly social media is a challenge,” Tatum said. “To the extent that we can put our phones down and talk face to face, in the communities where we are, I encourage that. … I think that it requires more imagination perhaps than we have right at this moment, but I think it is possible to build connections.”

In university settings, she noted, structured community dialogues that unfold over time have proven successful at initiating and sustaining productive dialogues about racial relations and policies. But much like taking an antibiotic, she said, it is important to stick with such programs for their entire schedule, rather than stopping too soon.

“There’s kind of an arc of discomfort,” Tatum said. “When you first start these conversations, they do feel awkward. And if you stop because you felt awkward, you never get to the place where you can do it well. … Yes, people make mistakes, yes, they say things that offend each other. And they come back the next week and try harder the next time. I mean, it’s a learning process, and we all have to be willing to learn.”

Tatum served from 2002 through 2015 as the ninth president of Spelman College, the historically black liberal arts college for women in Atlanta. She is now president emerita at Spelman.

A clinical psychologist by training, Tatum is also a former acting president of Mount Holyoke College, where she was a professor of psychology and education, and dean of the college and vice president for student affairs. Earlier in her career, Tatum was a faculty member at Westfield State College in Massachusetts and a lecturer at the University of California at Santa Barbara. She earned her BA at Wesleyan University and her MA and PhD in clinical psychology from the University of Michigan, as well as an MA in religious studies from Hartford Seminary.

MIT is hosting a follow-up discussion about “Why Are All the Black Kids Sitting Together in the Cafeteria?” on Wednesday, April 24, as part of the MIT Reads program, which is run by the MIT Libraries.

“We believe that can lead to greater understanding about topics and lead to a better and more cohesive community here at MIT,” said Chris Bourg, director of libraries at MIT, in introductory remarks at Thursday’s event.

The event was also organized by Kwadwo Poku, manager of diversity recruitment and initiatives in MIT’s School of Architecture and Planning, who spoke at the close of the session, quoting the American writer James Baldwin: “Not everything that is faced can be changed. But nothing can be changed until it is faced.”