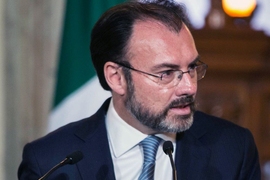 ↓ Download Image
Caption: Luis Videgaray PhD ’98, former foreign minister and finance minister of Mexico, is coming to MIT to spearhead an effort that aims to help shape global AI policies, focusing on how such rising technologies will affect people living in all corners of the world.
Credits: Credit: Courtesy of Luis Videgaray

Caption:
Luis Videgaray PhD ’98, former foreign minister and finance minister of Mexico, is coming to MIT to spearhead an effort that aims to help shape global AI policies, focusing on how such rising technologies will affect people living in all corners of the world.
Credits:
Credit: Courtesy of Luis Videgaray

Artificial intelligence is expected to have tremendous societal impact across the globe in the near future. Now Luis Videgaray PhD ’98, former foreign minister and finance minister of Mexico, is coming to MIT to spearhead an effort that aims to help shape global AI policies, focusing on how such rising technologies will affect people living in all corners of the world.

Starting this month, Videgaray, an expert in geopolitics and AI policy, will serve as director of the MIT Artificial Intelligence Policy for the World Project (MIT AIPW), a collaboration between the MIT Sloan School of Management and the new MIT Stephen A. Schwarzman College of Computing. Videgaray will also serve as a senior lecturer at the MIT Sloan and as a distinguished fellow at the MIT Internet Policy Research Initiative.

The MIT AIPW will bring together researchers from across the Institute to explore and analyze best AI policies for countries around the world based on various geopolitical considerations. The end result of the year-long effort, Videgaray says, will be a report with actionable policy recommendations for national and local governments, businesses, international organizations, and universities — including MIT.

“The core idea is to analyze, raise awareness, and come up with useful policy recommendations for how the geopolitical context affects both the development and use of AI,” says Videgaray, who earned his PhD at MIT in economics. “It’s called AI Policy for the World, because it’s not only about understanding the geopolitics, but also includes thinking about people in poor nations, where AI is not really being developed but will be adopted and have significant impact in all aspects of life.”

“When we launched the MIT Stephen A. Schwarzman College of Computing, we expressed the desire for the college to examine the societal implications of advanced computational capabilities,” says MIT Provost Martin Schmidt. “One element of that is developing frameworks which help governments and policymakers contemplate these issues. I am delighted to see us jump-start this effort with the leadership of our distinguished alumnus, Dr. Videgaray.”

As Mexico’s finance minister from 2012 to 2016, Videgaray led Mexico’s energy liberalization process, a telecommunications reform to foster competition in the sector, a tax reform that reduced the country’s dependence on oil revenues, and the drafting of the country’s laws on financial technology. In 2012, he was campaign manager for President Peña Nieto and head of the presidential transition team.

As foreign minister from 2017 to 2018, Videgaray led Mexico’s relationship with the Trump White House, including the renegotiation of the North American Free Trade Agreement (NAFTA). He is one of the founders of the Lima Group, created to promote regional diplomatic efforts toward restoring democracy in Venezuela. He also directed Mexico’s leading role in the UN toward an inclusive debate on artificial intelligence and other new technologies. In that time, Videgaray says AI went from being a “science-fiction” concept in the first year to a major global political issue the following year.

In the past few years, academic institutions, governments, and other organizations have launched initiatives that address those issues, and more than 20 countries have strategies in place that guide AI development. But they miss a very important point, Videgaray says: AI’s interaction with geopolitics.

MIT AIWP will have three guiding principles to help shape policy around geopolitics: democratic values, diversity and inclusion, and de-escalation.

One of the most challenging and important issues MIT AIWP faces is if AI “can be a threat to democracy,” Videgaray says. In that way, the project will explore policies that help advance AI technologies, while upholding the values of liberal democracy.

“We see some countries starting to adopt AI technologies not for the improvement for the quality of life, but for social control,” he says. “This technology can be extremely powerful, but we are already seeing how it can also be used to … influence people and have an effect on democracy. In countries where institutions are not as strong, there can be an erosion of democracy.”

A policy challenge in that regard is how to deal with private data restrictions in different countries. If some countries don’t put any meaningful restrictions on data usage, it could potentially give them a competitive edge. “If people start thinking about geopolitical competition as more important than privacy, biases, or algorithmic transparency, and the concern is to win at all costs, then the societal impact of AI around the world could be quite worrisome,” Videgaray says.

In the same vein, MIT AIPW will focus on de-escalation of potential conflict, by promoting an analytical, practical, and realistic collaborative approach to developing and using AI technologies. While media has dubbed the rise of AI worldwide as a type of “arms race,” Videgaray says that type of thinking is potentially hazardous to society. “That reflects a sentiment that we’re moving again into an adversarial world, and technology will be a huge part of it,” he says. “That will have negative effects of how technology is developed and used.”

For inclusion and diversity, the project will make AI’s ethical impact “a truly global discussion,” Videgaray says. That means promoting awareness and participation from countries around the world, including those that may be less developed and more vulnerable. Another challenge is deciding not only what policies should be implemented, but also where those policies might be best implemented. That could mean at the state level or national level in the United States, in different European countries, or with the UN.

“We want to approach this in a truly inclusive way, which is not just about countries leading development of technology,” Videgaray says. “Every country will benefit and be negatively affected by AI, but many countries are not part of the discussion.”

Part of Videgaray’s role includes building connections across MIT departments, labs, and centers to pull in researchers to focus on the issue. “For this to be successful, we need to integrate the thinking of people from different backgrounds and expertise,” he says.

At MIT Sloan, Videgaray will teach classes alongside Simon Johnson, the Ronald A. Kurtz Professor of Entrepreneurship Professor and a professor of global economics and management. His lectures will focus primarily on the issues explored by the MIT AIPW project.

Next spring, MIT AIPW plans to host a conference at MIT to convene researchers from the Institute and around the world to discuss the project’s initial findings and other topics in AI.