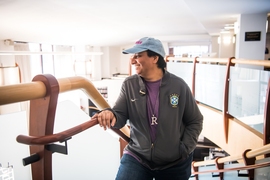 Rekha Malhotra joined MIT’s Comparative Media Studies program as a master’s student after 20 years as a flourishing New York City DJ. She has also accrued major accolades for other artistic endeavors: She was the sound designer for a Tony Award-winning Broadway show and a New York University artist in residence, and she has been inducted into People’s Hall of Fame in New York City.

All of these laurels arose from Basement Bhangra, a wildly popular monthly club night that Malhotra began in 1997. The show mixed traditional Punjabi dance music, called bhangra, with old-school hip hop, a fusion Malhotra helped to bring from the U.K. to the U.S. in the 1990s.

At the time, she says, many club owners discouraged or outright banned the genres because South Asian producers didn’t want to hear black music or the “lower-class” bhangra. But Malhotra was undeterred. “I love these two styles of music, and I didn’t want to water it down. I didn’t want anybody to tell me what I can and can’t play,” she explains. Her perseverance paid off: Since then, Malhotra has DJ’ed everywhere from celebrity weddings to the Obama White House to the historic Women’s March on Washington in 2017.

Not only a musical artist, Malhotra is also an activist at her core. She was a founding member of the South Asian Youth Organization in 1996. In college, she was part of a South Asian political rights organization that was formed in response to racial violence in Jersey City, in which one person was killed and one left for dead at a fire station. None of the accused were convicted. The experience politicized her.

For Malhotra, blending bhangra and hip hop was always about more than just producing innovative mixes. In creating her club nights, she also intended to create a space for her audience — and by extension, to support a community of South Asians, dancers, and community activists. She was particularly galvanized by the terrorist attacks on Sept. 11, 2001.

“9/11 was a very significant moment in New York,” Malhotra says. “People of Middle Eastern and South Asian descent were real targets. Nine days after 9/11 we had a party on the books and I really had to think about DJ’ing when there was a collective mourning in the city. And the venue was only a mile from [the World Trade Center]. This neighborhood had finally opened again, and the question was ‘Do we open?’ And the answer is: ‘Yes.’ You always open. … Fundamental to my work is not just playing music, but creating a space to play the music.” Malhotra sees herself as not just a DJ, but as a cultural curator, because of how her activism intersects with her performances.

Ultimately, it was this community work that brought Malhotra to MIT. She had heard about the CMS program from professors and graduates whom she met in New York. At the same time, Malhotra found that she was craving more intellectual engagement with her work.

“Definitely in the pace and the hustle of New York there wasn’t always time to think,” she recalls. “I wanted to reflect on the work I was doing, to gain the qualifications to eventually teach more, to gain an opportunity to write critically and reflect, and also to be in a community of other people who are also thinking and writing and engaged.”

At MIT, Malhotra works with Associate Professor Vivek Bald in the Open Documentary Lab on the Lost Histories Project. The first year of the CMS program is highly structured with coursework, colloquia, and lectures, but in the second year, students are encouraged to sample many of the intellectual resources at MIT and Harvard University. Malhotra relishes the flexibility of the program and has taken full advantage of the broad array of available coursework, including 21M.361 (Electronic Music Composition), 11.S948 (Writing About the Modern City), MAS.S62 (Principles of Awareness), and Harvard’s WOMGEN 1212 (Beyoncé Feminism and Rihanna Woman).

She also appreciates the diversity of the students and faculty in CMS. “I feel like I’ve been able to be myself here,” she says. “And I think that the uniqueness of our program is that there are so many different kinds of people. … We’ve got filmmakers and gamers and scholars and anthropologists. And our professors have so many different interests and backgrounds. They’re in the world and in their academic space too. It’s such a rich community of people.”

As her June graduation nears, Malhotra is working on her thesis, which examines the mythologies around DJ’ing as a cultural practice. She’s weaving in ideas about the physical practices of DJ’ing, gender in DJ’ing, and the concept of authenticity and tradition in club music. “There’s a certain sense of ubiquity around DJ’ing, but what do we really understand about it and how is it actually practiced?” she says. “Is it about cutting and scratching? Is that really how people perform or consume music? It’s one technique and it’s one small part of the spectrum of DJ’ing, and that’s turntablism, which is very specific. A scratch interrupts the flow, but it’s demonstrative. I’m interested in that.”

As an artist who melds the strong cultural touchstones of bhangra and hip hop music, Malhotra also contends with traditionalists. “Once you introduce recording, how does the medium change the art — or does it?” she says. “For any style of culture, there’s often someone saying that it’s being morphed into something that’s not original. But the nature of culture is to keep changing — according to me.” She pauses, adding, “I try to go from a more aesthetic place: Does it sound good? Will it make people dance? That’s my guiding principle. I don’t have any hang-ups around what’s traditional.”

Though a die-hard New Yorker, Malhotra has a fond appreciation for her temporary home in Cambridge. “I try to get immersed in the state of mind and where I’m living. I try to follow local happenings and newsletters. I feel like it’s important to know about the community you’re in. Cambridge really cares about itself.” She smiles. “So much so, that you can’t park a car here! Yes, I’m a grumpy New Yorker and I’d like things to stay open later, but it’s been manageable.”

Luckily, Malhotra can commiserate with several friends from her New York South Asian activist and artist community who are also pursuing work at Harvard and MIT. She also attends an open mic nights organized by SubDrift, a community of Boston-based South Asians. Although she has focused deeply on her academic work while at MIT, she’s made some time to DJ in Boston at the Museum of Fine Arts Late Night, MIT Sloan, and an all-ages party called Local Beats in Somerville.

After graduation, Malhotra plans to continue the bhangra music podcast she began in 2011, as well as her DJ gigs. She will also attend a Feet in 2 Worlds audio workshop called “Telling Immigrant Food Stories,” for which she was awarded a scholarship. She looks forward to returning to her beloved Jackson Heights neighborhood in Queens, where she has a place on the board of Chhaya CDC, a community organization supporting New Yorkers of South Asian origin. But she is also embracing any new opportunities that come her way.

“The world is open in some ways, but I want to be more intentional and think about what I want to do in the world,” Malhotra says. “I’m in a great space of privilege in having an art career and now having this educational experience. Coming [to MIT] has definitely opened doors in opportunities and in my way of thinking.”

Dance brings a community together