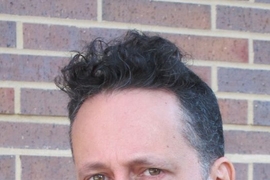 ↓ Download Image
Caption: Vivek Bald hopes “Bengali Harlem” will be read both by scholars and by a general audience.
Credits: Photo: Rachel Rosenbloom

Caption:
Vivek Bald hopes “Bengali Harlem” will be read both by scholars and by a general audience.
Credits:
Photo: Rachel Rosenbloom

South Asian immigrants were not legally allowed to enter the United States between 1917 and 1965. But many came anyway: working on British steamships, then deserting in American ports and carving out new lives for themselves. Consider Habib Ullah, a Muslim from East Bengal (now Bangladesh) who in the 1920s left a ship in Boston and found his way to New York. Ullah settled in East Harlem, and by the 1940s was running a popular restaurant, the Bengal Garden, in Manhattan’s Theatre District.

While it is commonly known that a wave of well-educated South Asians arrived in the United States after 1965, this earlier saga of immigration and assimilation has largely been overlooked. Until now, that is: A new book, “Bengali Harlem and the Lost Histories of South Asian America,” by MIT assistant professor Vivek Bald, illuminates this thread of history in unprecedented detail.

“Without these stories, the history of South Asians in the U.S. is incomplete,” Bald says.

One reason the subject has particular resonance for the present day, Bald believes, is that many of the immigrants in question were Muslim. “I wanted to make clear the depth and the persistence of the South Asian presence in the U.S.,” he says, “and specifically the South Asian Muslim presence in the U.S., at a time when Muslims are being portrayed as newcomers, enemies and outsiders.”

The genesis of “Bengali Harlem,” published this month by Harvard University Press, comes in good measure from conversations Bald had with Alaudin Ullah, a New York-based actor and playwright and the son of Habib Ullah. Hearing about the Ullah family’s odyssey sparked Bald’s curiosity.

“I wanted to see if Alaudin’s father was just one anomalous person or part of a much larger history that we had completely overlooked,” says Bald, of MIT’s Program in Writing and Humanistic Studies.

After all, as he notes, “the predominant understanding of South Asian immigration to the U.S. was one in which the doors to immigration closed in the late 1910s and early ’20s, and then opened up again in 1965,” Bald explains. Because of the way the 1965 Immigration Act was crafted, he notes, the South Asians who came to the United States in its wake were predominantly highly skilled professionals. But Ullah’s story suggested to Bald that there was a longer history of striving, working-class South Asian immigrants in America.

Bald, who had previously made two documentary films about South Asians in the United States and Britain, launched an ambitious research project, scouring census records and historical archives, conducting interviews, and even locating one autobiographical account written by an Indian Muslim seaman who jumped ship in New York in 1918.

Bald found two waves of early South Asian immigration to America that had been overlooked. The first, which began in the late 1800s, consisted of peddlers who sold embroidered goods made in their home region of Hooghly in West Bengal; many such immigrants settled in the Treme neighborhood of New Orleans. In the 1920s and 1930s, it became more common for South Asians, such as Habib Ullah, to jump ship and live in Eastern and Northern cities, including Baltimore and Detroit.

In the process, many Bengalis, who lived in close proximity to African-Americans and Puerto Ricans, found themselves marrying into those communities. For instance, Habib Ullah’s wife, Victoria Echevarria Ullah, was a Puerto Rican immigrant who helped him run the family restaurant.

“This began as a story about the South Asian diaspora, but it quickly became clear that this was also a story about African-American and Puerto Rican neighborhoods, and the families and friendships and communities that South Asian Muslims formed there when they were not openly welcomed into the nation,” Bald says. The trajectory of these migrants, he observes, underscores “the importance of working-class communities of color in the larger story of immigration to the U.S.”

Bald hopes “Bengali Harlem” will be read both by scholars and by a general audience. Gayatri Chakravorty Spivak, a professor of English and comparative literature at Columbia University, has called it “meticulously researched, movingly told, and absolutely timely.”

The book is just one element of a larger project on the topic that Bald has been pursuing. He is also collaborating with Alaudin Ullah on a documentary film on the subject, “In Search of Bengali Harlem,” and has created a website where the descendants of other early South Asian immigrants to the United States will be able to relate previously unknown stories.

“My hope is that through the book and through the documentary, the children and grandchildren of those immigrants will come forward to tell their stories,” Bald says.

Bald suspects there was more Bengali Muslim immigration to Detroit, among other places, than he has yet been able to document. Further detailing the history of Bengali immigrants, and in so doing providing a link to the present, will likely be a group effort.

“The project aims to provide a collectively produced digital archive for contemporary working-class and Muslim South Asian communities, which have grown in the U.S. and are continuing to grow,” Bald says. “I hope it begins a larger process of recovering and documenting these groups’ historical experiences in the United States.”