Committed to service and science 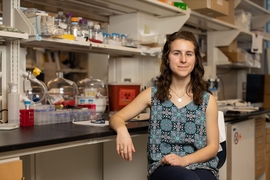 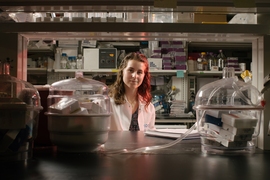 Julia Ginder has to avoid a lot of foods due to allergies. From a young age, she got used to bringing her own snacks to birthday parties and group outings. But she didn’t really know the science behind her allergies until high school, when she read a chapter for class on immunology.

“I read it, and then I read it again, and I went running downstairs to tell my mom, ‘This is what’s wrong with me!’” she recalls.

From then on, Ginder was driven to learn about what made her body react so severely to certain stimuli. Now a biology major, she does research in the lab of Christopher Love, in the Koch Institute for Integrative Cancer Research, where she studies peanut allergies — one of the few food allergies she actually doesn’t have.

“I really enjoy figuring out, what’s the perspective from the biology side? What is the contributing chemistry? And how do those fit together?” she says. “And then, when you take a step back, how do you use that knowledge and perhaps the technology that comes out of it, and actually apply that in the real world?”

In the Love lab, researchers look at how individual immune cells from people with peanut allergies react when stimulated with peanut extracts. More recently, they’ve been analyzing how the stimulated cells change over the course of treatment, evolving from one state to the next.

“You can watch the activation signals change over time in individual cells from peanut-allergic patients compared to healthy ones,” Ginder explains. “You can then dig deeper and look at distinct populations of cells at a single time point. With all of this information, you can start to get a sense of what critical cell types and signals are making the allergic person maintain a reaction.”

The researchers aim to figure out which cell types are associated with the development of tolerance so that more effective treatments can be developed. For instance, allergic people are sometimes given peanuts in small doses as a sort of biological exposure therapy, but perhaps if more key cell states are identified, targeted drug treatments can be added on top of that to induce those cell states.

Further pursuing her interest in health, Ginder spent the Independent Activities Period of her sophomore year volunteering for Boston Medical Center. The program she worked for helped families learn how to be advocates for their children with autism. For instance, it provided guidance on how to negotiate an appropriate accommodations agreement with their child’s school for their individual needs.

“It [the BMC experience] made it clear to me that for a child to succeed, they need to have support from both the educational side and the health side,” she says. “And it might seem obvious, but, especially for a child who might be coming from a less privileged background, those are two really important angles for ensuring that they are given the opportunity to reach their full potential.”

“The most helpful thing you can do is simply be there.”

Ginder became a swim coach and tutor for Amphibious Achievement in the fall of her first year, almost immediately after arriving at MIT. It’s a program that aims to help high schoolers reach both their athletic and academic goals. The high schoolers, often known as Achievers, are assigned a mentor like Ginder who helps with the academic and the athletic activities.

Local students come to MIT early Sunday morning to practice swimming or rowing, head to the Maseeh dining hall for lunch, participate in an afternoon academics lesson, reflect on their goals, and then spend a half an hour one-on-one with their mentor. It’s a big commitment for both the Achievers and mentors to spend almost six hours every Sunday with the program, but Ginder, who completed her two-year term as one of the co-executive directors this fall, has seen the importance of showing up week after week.

“The most helpful thing you can do is simply be there. Listen if they want to tell you anything, but really just being consistent — every single Sunday, being there.”

Ginder played on the field hockey team during her first year. However, when a practice during her sophomore year left her with a concussion and unable to play, she used the newfound spare time to start volunteering for Camp Kesem (CK). Having really enjoyed her experience at Amphibious Achievement, she was eager to be a counselor for the camp, which serves children whose parents are affected by cancer.

“Being there for someone, whether they are having a tough time or a great day, is really important to me. I felt that CK really aligned with that value I hold, and I hoped to meet even more people at MIT who felt that way. And so I joined, and I’ve loved it,” she says.

Eventually, Ginder would like to become a physician, possibly in the fields of pediatrics and allergies. However, with a minor in public policy, she’s interested in developing areas outside of science as well. So, for the next couple of years, she’ll be moving westward to work as an associate consultant for Bain and Company in San Francisco.

“The reason I’m most interested in consulting is that there is this strong culture of learning and feedback. I want to improve my ability to be a strong team member, leader, and persuader. I think these are areas where I can continue to grow a lot,” she says. “It may sound silly, but I think for me, as someone who is 5’2” and hoping to become a pediatrician, it’s important to cultivate those professional skills early. I want to also serve as a leader and advocate outside of the clinic.”

As Ginder admits, the move is quite the geographic leap. Right now, her entire family is between a 20-minute and two-hour drive away. Moving to the opposite side of the country will be difficult, but she isn’t one to shy away from a challenge.

“I think it’ll be a bit sad because I’m not going to be as close to my family, but I think that it’ll really push me to be as independent as possible. I’ll need to look for my own opportunities, meet new people, build my network, and be my own person,” she says. “I’m really excited about that.”