Achieving goals in the lab and on the pitch 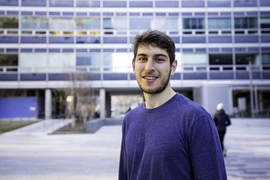 Anthony Badea got hooked on physics during his senior of high school in Irvine, California. He used to fall asleep watching interviews and speeches by public figures in science like astrophysicist Neil deGrasse Tyson and string theorist Michio Kaku. The questions they asked about the universe fascinated him.

When he came to MIT, Badea found himself in awe of another scientist — the one who taught 8.03 (Waves and Vibrations). That was Yen-Jie Lee, the Class of 1958 Career Development Associate Professor of Physics and a researcher in the Laboratory for Nuclear Science.

“I just thought he was the coolest person I’ve ever met,” Badea says. “He comes in front of the class, and he’s super energetic about everything. Everyone in the class loves him.”

Badea, now majoring in both physics and mathematics and minoring in statistics, reached out to Lee inquiring about his research with CERN. When Lee explained his work, it was so advanced that Badea understood almost nothing — but he was thrilled to have the chance to learn. He’s been a part of the MIT Relativistic Heavy Ion Group ever since.

“There’s a graduate student area, and he gave me a desk there,” he says. “Yen-Jie is almost like a father figure to me now.”

One aim of Badea’s close-knit research group is to examine what happens after two particles are smashed together. The idea is that when researchers collide two heavy ions, the events that follow closely resemble what happened right after the Big Bang, potentially giving insight into the beginnings of the universe.

Specifically, the lab is interested in a material that existed just moments after the Big Bang, called quark-gluon plasma — Badea describes it as melting a proton down into a soup. When researchers take two heavy nuclei and smash them together, they are confident that they are recreating that same kind of plasma. If they go a step smaller, colliding two protons instead of two nuclei, they observe an enhancement that looks like the presence of the plasma, but they’re not certain. Badea’s research takes it one step smaller — he looks at the tiniest known possible collision, between electrons and positrons.

Most of the data for the lab’s research come from CERN’s Large Hadron Collider, where Badea worked for the last two summers. However, the LHC isn’t capable of colliding electrons and positrons. The only collider that did run electron-positron collisions closed several years ago. Badea and Lee knew that if they wanted to study those collisions, they needed the archived data from that retired collider. It took months, but Lee finally got access to it around December 2016.

“When we actually got the data, it was a moment of, ‘Okay, we can do this. We can actually make this happen,’” he recalls.

A copious amount of data-cleaning and a few million lines of code later, Badea and his labmates began to make sense of the data. The whole project took two years, the first of which was spent replicating and confirming the calculations of the original researchers. They also found something interesting: When they looked at the particles after their collision, they did not see a signal like the one produced by the big particle collisions. In other words, smashing together these tiniest of particles does not create the proton-soup plasma, meaning that there is a set of conditions that were necessary to produce the plasma after the Big Bang and are now necessary to produce it at CERN. The team is submitting a short paper reporting their findings to Physical Review Letters and a longer one detailing the new techniques created for this analysis to the Journal of High Energy Physics.

Before Badea discovered physics, his entire life was devoted to soccer. He was 14 when he was chosen for the U.S. Soccer Developmental Academy, which can act as a feeder program for the U.S. national team. After a year and a half, he became a starter. In his senior year, he felt like he was really flourishing — but he had a pretty big choice to make.

“This was kind of around the time where I was deciding, do I want to go to a Division I school with … lesser academics, or do I want to try for something else?” he says.

When Badea was offered a place in MIT’s class of 2019, he says, there was no question.

“When I got in here, there was just some feeling where I thought, I can’t turn this down,” he says. “This is a once-in-a-lifetime.”

During his time on MIT’s Division III soccer team, he’s had some major injuries, including a torn ACL, a torn adductor, a torn hamstring, and a strained IT band, that put him on the sidelines for months at a time. But this year, spending less time on the field gave him a chance to serve in a mentorship role for younger players.

“It was a big maturing moment for me, to be a leader without being the focal point of a team,” he says.

And, as his final season at MIT came to a close in October, he was healthy enough to finish his collegiate career on the field.

In his spare time, Badea has worked as a grader for the Department of Physics. He has developed his own method of giving feedback in which he focuses on errors in students’ thinking rather than their calculations. He has also gotten involved with peer tutoring and mentoring within his research group, and values the role he plays for younger students his lab.

“Now that I’m a senior member in the group, there’s new undergrads that are coming up, so I get to be the mentors to them,” he says. “And so what Yen-Jie was to me, I get to be to them.”

This year, he moved in to the house of his fraternity Phi Beta Epsilon, where he has “three really cool roommates.” Though he liked the quiet of his single room in Maseeh Hall, he enjoys living with people who have diverse interests. And he makes a point to exercise an hour and a half to two hours every day — he doesn’t think he’s missed a day since he’s been at MIT.

Badea has just submitted his applications for PhD programs in physics. But he’s also taken up a humanities concentration in political science and is interested in how science can be used to support policymaking. For instance, the wildfires in his home state of California strike him as an issue that researchers in many disciplines could play a role in addressing.

“In the physics department, you have some of the smartest people in the entire world,” he says. “If some of them put in some time into other things, a lot of change could happen.”

Jumping through life and his passions at MIT