Robots shoot for the moon in MIT’s annual 2.007 competition 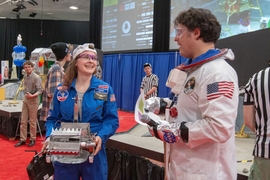 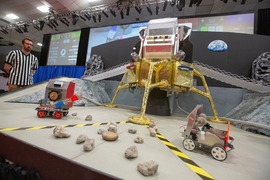 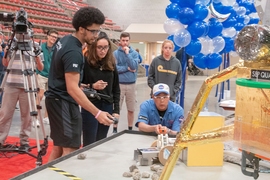 ↓ Download Image
Caption: A 2.007 instructor measures the speed at which a student’s robot spins a wheel — one of several point-scoring tasks.
Credits: Photo: Tony Pulsone 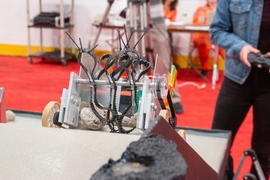 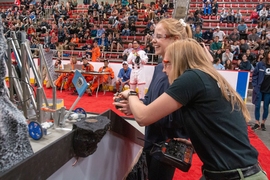 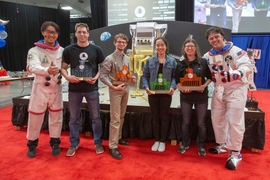 Caption:
Robots face off on the 2.007 lunar game board.
Credits:
Photo: Tony Pulsone

Caption:
A 2.007 instructor measures the speed at which a student’s robot spins a wheel — one of several point-scoring tasks.
Credits:
Photo: Tony Pulsone

Caption:
2.007 students remotely control a robot designed to hoist a flag onto a hillside, via a scissor-like mechanism.
Credits:
Photo: Tony Pulsone

In their historic lunar mission 50 years ago, Apollo 11 astronauts Buzz Aldrin and Neil Armstrong collected and returned to Earth more than 48 pounds of lunar material, including 50 moon rocks that researchers have been analyzing intensely ever since. If they’d only had help from some MIT robots, the astronauts might have been able to bring back even more lunar loot.

On Thursday evening, students of MIT’s popular class 2.007 (Design and Manufacturing I) proved that robots can be efficient, ingenious, and even highly entertaining moon-rock scavengers.

Over four often nail-biting hours, 32 student finalists, winnowed from a roster of 165, competed head to machined head, in the course’s annual robot competition, held in the ice rink at MIT’s Johnson Athletic Center. This year’s theme, Moonshot, was an homage to the Apollo 11 moon landing, celebrating its 50th anniversary this year.

The course designers and machinists took the theme to heart, constructing two huge, identical game boards over which pairs of student-designed robots faced off. At the center of each board stood a replica of the Apollo 11 lunar module, or LEM, which served as the competition’s starting point. Ramps on either side of the LEM sloped down to a lunar-like surface, littered with “moon rocks” — stones of various sizes and shapes, which, for practical purposes, were of Earthly origin.

The challenge called for students to maneuver their robots, which either moved autonomously or were remotely controlled, from the LEM’s starting point down to the “lunar” surface to collect as many moon rocks as possible, and return them up to the LEM, within two minutes. Robots gained more points by planting a small flag on a hillside, spinning a wheel to “charge” the LEM’s battery, and pulling a cord to jettison two weights — a particularly tricky task that, if accomplished, would trigger the LEM to “lift off,” to dramatic smoke and sound effects.

“The competition name is very apropos of the challenge that the students face, because for many of them, making a robot by themselves for the first time is a moonshot,” says Amos Winter, course co-instructor and associate professor of mechanical engineering at MIT. Winter and Associate Professor Sangbae Kim served as the competition’s emcees, both suited up for the occasion in astronaut gear.

The 2.007 competition is a yearly tradition that dates back to the 1970s, with the course’s first instructor, Woodie Flowers, the Pappalardo Professor Emeritus of Mechanical Engineering, who developed 2.007 as one of the first hands-on, project-based undergraduate courses.

Each year, at the start of the semester, students are given the same toolbox of parts, including gears, wheels, circuit boards, and microcontrollers. Through lectures and time — lots of time — in the lab, students learn to design and machine their own robot, to carry out that year’s competition challenges.

This year’s challenge inspired a range of robotic strategies and designs, including a bot, aptly named Scissorlift, that stretched itself up via a scissoring mechanism to plant a flag, and a two-bot system named Lifties, comprising one robot that hoisted rocks up to a second robot via a telescoping arm.

While most students hoped for a win, sophomore Jaeyoung Jung simply wanted to entertain. After requesting that the event’s overhead music be turned down, Jung, sporting a tuxedo, made some music of his own, playing a recorder that he had rigged to maneuver his robot. Each note he played was converted to electrical signals that were picked up by a computer, which in turn sent a corresponding command to the robot’s controller to spin a wheel and charge up the LEM.

Though the competition’s first music-controlled robot didn’t make it through the first round, it was met with cheers from an often raucous crowd of family and friends, who were treated sporadically with a confetti of custom-designed foam astronauts fired from an air cannon.

Among the enthusiastic crowd was Evelyn Wang, head of the Department of Mechanical Engineering, and her two young children, who were seeing the engineering spectacle for the first time. The competition brought back memories for Wang, who participated in 2.007 when she herself was an MIT undergraduate. That year, she recalls having to compete on a game board dubbed “Ballcano,” for a volcano-like structure that spit out balls, which robots had to catch and distribute at various locations across the game board.

“It was the first time I learned how to design, build, machine, and work with different actuation mechanisms and motors and pneumatics,” says Wang, who proudly remembers taking home fourth place.

As the night wore on, robots battled over who could scrabble up the most moon rocks, using a variety of designs, from grippers and grabbers to snowplow- and comb-like sweepers, and rotating flippers and flaps. Between each bout, course assistants quickly repositioned the moon rocks and swept the game board of any residual moon rock dust that could make a robot slip. To contend with this potential hazard, some students designed their bots with extra traction, lining their wheels with Velcro or, in the case of one bot named Sloth, rubber bands.

Sophomore Jessica Xu, whose spiky, rock-snatching “Cactus-bot” made it all the way to the semifinals, says that 2.007’s hands-on experience has helped to steer her toward a mechanically-oriented career.

“This is my first experience ever even thinking of building a robot,” Xu says. “I started the class googling, ‘What are mechanisms that robots even do?’ Because I wasn’t even sure what the possibilities were. I came into college wanting to do something that applies to health care. Now I’m hoping to concentrate in medical devices, applying the mechanical side. I’m excited to see what it could be.”

In the end, it was a powerful, motor-heavy bot named Rocky that gobbled up rocks “like Cookie Monster,” as Winter reported to the crowd, that took home the prize. Rocky’s designer, sophomore Sam Ubellacker, says it could have been the bot’s drive train that made the difference. While most students included two motors in their drive trains, Ubellacker opted for four, in order to move twice as fast as his competitors — an 11th-hour decision that ultimately paid off.

“I pretty much redesigned my entire robot the week before this competition, because I realized my other one wasn’t going to score any points,” says Ubellacker, who, as it happens, has kept up the family tradition — his brother Wyatt won first prize in 2011. “I’ve probably worked about 100 hours this week on this robot. I’m just glad that it worked out.”

He credits his success, and all the know-how he’s gained throughout the semester, to all the experts behind 2.007.

“I didn’t know much about machining going in,” Ubellacker says. “Interacting with the machinists and the staff will be my most memorable experiences. They’re all really cool people, and they shared all this knowledge with me. This was all really great.”