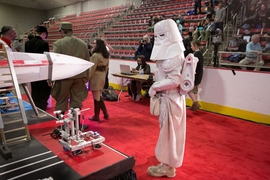 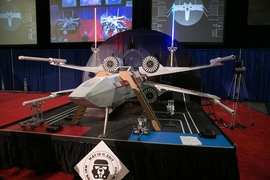 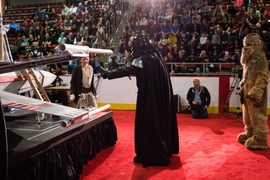 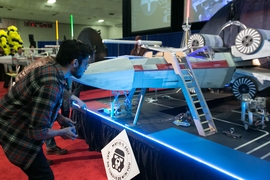 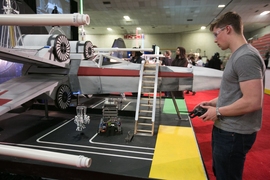 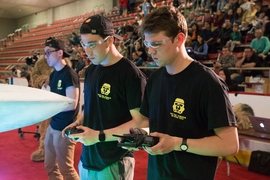 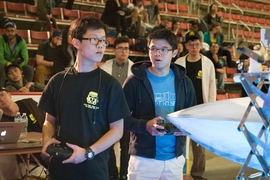 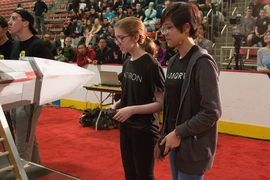 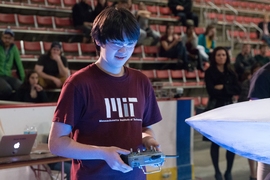 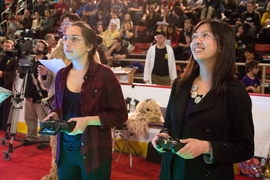 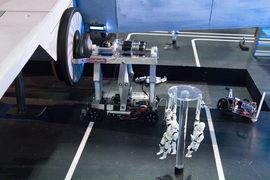 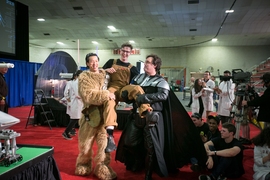 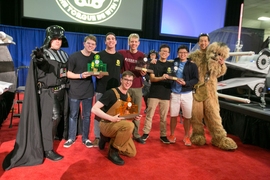 In one of MIT’s most eagerly awaited annual events, Thursday night dozens of robots designed and built by undergraduates in a mechanical engineering class endured hours of intense, boisterous, and often jubilant competition as they scrambled to rack up points in one-on-one clashes on special “Star Wars”-themed playing arenas.

As has often happened in these contests — which have been going on, and constantly evolving, since 1970 — the ultimate winner in the single-elimination tournament was not the one that’d most consistently racked up the highest scores all evening. Rather, it was a high-scoring bot that triumphed when its competitor missed a crucial scoring opportunity because its starting position was just slightly out of alignment.

The class, 2.007 (Design and Manufacturing I), which has 165 mostly sophomore students, begins by giving each student an identical kit of parts, from which they each have to create a robot to carry out a variety of tasks to score points. This year, in a nod to the 40th anniversary of the first “Star Wars” film, released in 1977, the robots crawled around and over a replica of a “Star Wars” X-wing Starfighter. Students could earn points by pulling up a sliding frame to rescue prisoners trapped in carbonite; by dumping Imperial stormtroopers into a trash trench; by activating a cantina band; or by spinning up one or both of two large cylindrical thrusters on the wings. Students could choose which tasks to have their robot try to accomplish, and had just one semester to design, test, and operate their bot.

The devices could be pre-programmed to carry out set tasks, but could also be manually controlled through a radio-linked controller. As in past years, the open-ended nature of the assignment — and the variety of different ways to score — led to a wide range of strategies and designs, spanning from tall towers that would extend by telescoping out or with hinged sections, to elevator-like lifting devices, to small and nimble bots that scurried around to carry out multiple tasks, to an array of arms and devices for grasping or turning the different pieces. They sported names like Dodocopter, Bonnie and Clyde, Pitfall, Torque Toilet, Spinit to Winit, and Nicki Spinaj.

Students could earn extra points by accomplishing any of the tasks during an initial period when the robot had to perform autonomously, before the start of a manually remote-controlled round. The students were allowed to create multiple robots to carry out different tasks, as long as they were all made from the basic kit of parts, and all fit within a designated starting area. Most of the students opted to build two devices, and some even made three.

Second-place finisher Richard Moyer, with his small but powerful and robust robot called Tornado, consistently scored 960.5 points in every round (the highest score achieved by any of the bots), by spinning both the lower and upper thrusters to their maximum speeds — and by using the lower thruster during the high-scoring autonomous period. But on the final matchup, Tornado was just slightly out of place in the starting box, and missed the thruster, losing out on that big initial score.

The robot used a simple but reliable design, which sported a single horizontally-mounted drive wheel that it used to spin both the lower and upper thrusters, and also to activate an elevator mechanism that carried it from one wing to the other. It was “like the Swiss army knife of robots,” thanks to this multifunction device, said Sangbae Kim, an associate professor of mechanical engineering and co-instructor of the course, who was dressed as the “Star Wars” wookie, Chewbacca.

The grand-prize winner, Tom Frejowski, also built a compact, powerful robot that concentrated on the spinning task, and scored 640 in the final round to take home the top trophy (a replica of the MIT dome). Frejowski’s robot, in order to ensure that it made a straight shot from the starting position to the thruster to line up just right to spin the heavy cylinder, used a single motor to drive both of its front wheels, which helped him earn consistent high scores. “That’s how he goes dead straight every time,” said co-instructor Amos Winter, an assistant professor of mechanical engineering, who was dressed as Darth Vader and shared the emcee duties with Kim.

During the tournament, which took place in the Johnson Ice Rink, all of the course teachers and assistants were dressed in various “Star Wars” costumes, and a packed audience of fellow students, families, and visitors of all ages cheered their encouragement with great enthusiasm. During a break, each of the teaching assistants was presented with a special memento: a beaver-cut twig from a beaver dam in Nova Scotia, symbolizing MIT’s beaver mascot, and nature’s original mechanical engineer.

Echoing the sentiments of many students in the class, sophomore James Li said of the class in a pre-taped video: “I had a bit of building experience, but I never had to design and build anything of this complexity. … It was a great experience.”

Boston Globe reporter Steve Annear writes that a replica “Star Wars” X-wing Starfighter made an appearance in Lobby 7 on Monday. The replica was originally created for the annual 2.007 robot competition, during which students navigate robots that they designed and built themselves through a “Star Wars”-themed course.

p.p1 {margin: 0.0px 0.0px 0.0px 0.0px; font: 11.0px Calibri} span.s1 {font-kerning: none} Metro reporter Kristin Toussaint interviewed students in Course 2.007 as they tested robots they designed and built for the class’ annual robotics competition, which featured a “Star Wars” theme this year. “Every year we get crazy, cool, creative insights that the students come up with and awesome robots they build that we would have never anticipated,” explains Prof. Amos Winter.