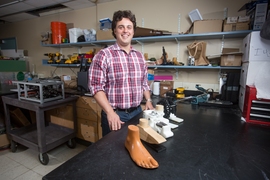 The award was established in 1982 as a tribute to Institute Professor Emeritus Harold E. Edgerton, for his active support of younger, untenured faculty members. Each year, a faculty committee presents the award to one or more junior members of the faculty, in recognition of exceptional distinctions in teaching, research, and service.

Winter was honored for being “a leader in global engineering, an emerging sub-discipline that seeks creative solutions to persistent challenges in the developing world.” The committee, chaired by MIT Sloan School of Management Professor Thomas A. Kochan, also noted “his creativity in designing critical but affordable products within the constraints found in emerging markets, and for his approachable style and advocacy on behalf of his students, as well as the infectious energy he imparts to them.”

Winter’s students have thrived under his mentorship. A team he led with one of his graduate students, Natasha Wright, was awarded the USAID Desal Prize in 2015 for their work on affordable and sustainable photovoltaic desalination; Wright and two other graduate students in Winter's laboratory, Dan Dorsch and Katy Olesnavage, have been awarded the Lemelson-MIT Student Prize — Wright and Olesnavage this year, and Dorsch in 2016.

In addition, the famed mechanical engineering undergraduate course, 2.007 (Design and Manufacturing I), has been co-taught by Winter for the past few years. The themes of the class’s final robot competition, where students compete against one another, have been drawn from pop culture, ranging from “Back to the Future” to Paul Revere’s ride to this year’s “Star Wars.”

Focused on the marriage of mechanical design theory and user-centered product design, Winter’s research interests include design for emerging markets and developing countries, biomimetic design, fluid/solid/granular mechanics, biomechanics, and the design of ocean systems. Innovations of note include the development of the Leveraged Freedom Chair, an all terrain wheelchair, and the advancement of prosthetic limbs, drip irrigation nozzles, and small-scale desalination plants.

Much of his work is based in a concept dubbed “reverse innovation.” Detailed in an award winning Harvard Business Review paper co-authored with Dartmouth’s Vijay Govindarajan, “reverse innovation” refers to the commercialization of emerging marketing solutions to more developed markets such as the United States.

Winter recently received a 2017 NSF CAREER Award and was also awarded the 2017 Junior Bose Award, given each year to an outstanding contributor to education from among the junior faculty of the School of Engineering. He was also named one of the 35 Innovators Under 35 for 2013 by MIT Technology Review magazine; was a winner of the 2012 ASME/Pi Tau Sigma Gold Medal; and was honored with the 2010 Tufts University Young Alumni Distinguished Achievement Award and the 2010 MIT School of Engineering Graduate Student Extraordinary Teaching and Mentoring Award.

Winter received a bachelor of science in mechanical engineering from Tufts University and master of science and PhD degrees in mechanical engineering from MIT. He did postdoctoral research at the SUTD/MIT International Design Center and the Indian Institute of Technology Delhi, returning to MIT’s Department of Mechanical Engineering in July 2012. Winter is also co-founder and chief scientific advisor for the local MIT spinout company, Global Research Innovation and Technology (GRIT).

Building the mountain bike of wheelchairs

Cleaning water without the grid