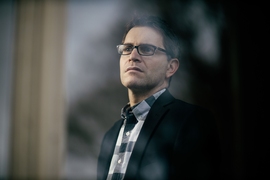 ↓ Download Image
Caption: Associate Professor Ken Kamrin has dedicated his research to predicting the behavior of sand and other granular material, with models that are as accurate as possible without being overly time-consuming to run.
Credits: Image: Jared Charney 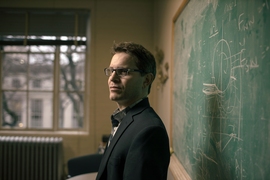 Caption:
Associate Professor Ken Kamrin has dedicated his research to predicting the behavior of sand and other granular material, with models that are as accurate as possible without being overly time-consuming to run.
Credits:
Image: Jared Charney

A rather imposing hourglass is one of the first things people notice in Ken Kamrin’s office. The beautiful timepiece, a gift from Kamrin’s wife, has decorated the space since his first day as a faculty member in MIT’s Department of Mechanical Engineering.

Kamrin will occasionally use the hourglass for its intended purpose — “I have my usual joke: It tells us when our meeting is over,” Kamrin cracks. But more often than not, it’s the perfect prop to demonstrate the peculiarities of his favorite subject, granular material.

“If you look at sand in an hourglass, the top looks like a solid bed, whereas the middle is flowing like a liquid,” Kamrin says. “You also have this stream that’s essentially a gas before it hits the floor and goes back to being a solid. All of this makes grains extremely messy and hard to predict.”

Nevertheless, Kamrin, who recently was granted tenure, has dedicated his research to predicting the behavior of sand and other granular material, with models that are as accurate as possible without being overly time-consuming to run.

Existing models typically simulate every single grain within a flow — an approach that, however precise, can take weeks to achieve. Kamrin’s models instead combine discrete models with a “continuum” approach, which essentially generalizes certain parts of a granular flow, significantly speeding up simulations while maintaining their accuracy.

He hopes his models will have wide-ranging applications, including preventing blockages in grain silos, improving wheel designs over rocky terrain, and predicting the impact of potential avalanches and landslides.

At MIT, Kamrin is happiest when surrounded by creativity and noise.

“I come from a very loud family, and I like the fact that MIT is boisterous and loud,” Kamrin says. “When you walk down the Infinite, there’s always something going on. And if you find yourself getting curious about something new, you know there’s someone here who knows something about it. It’s a great energy.” 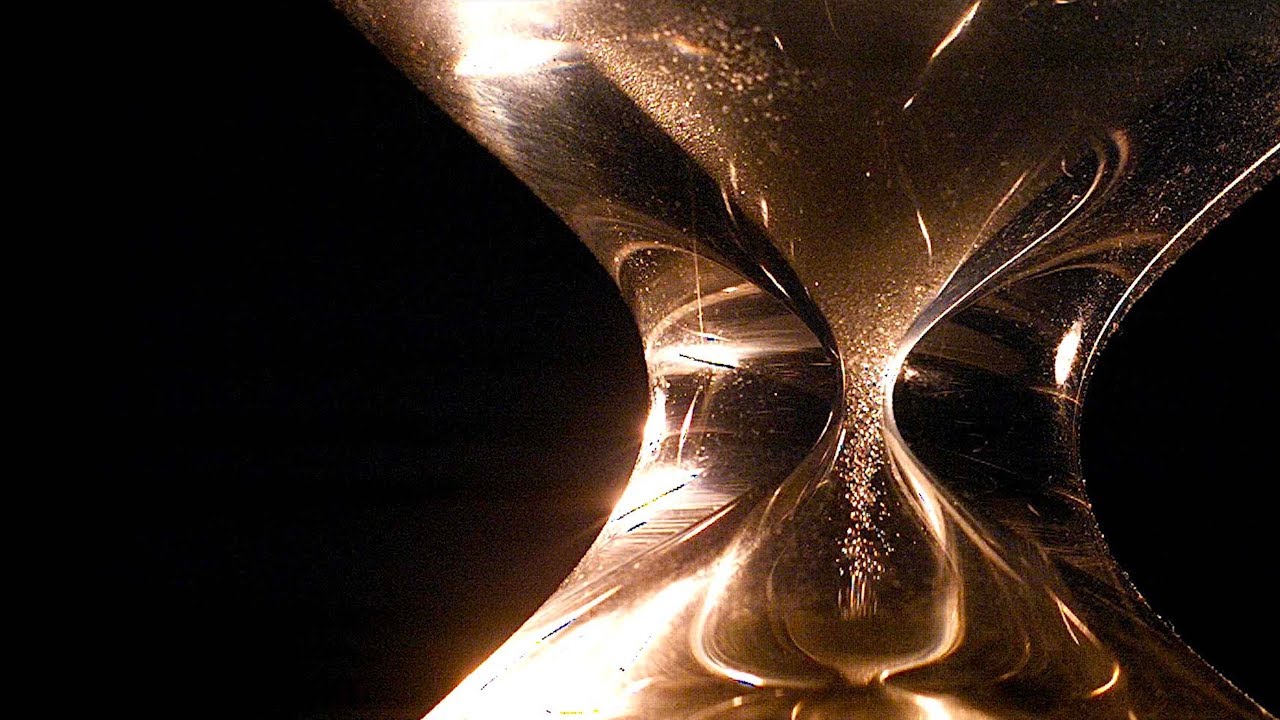 Kamrin grew up in the town of Pleasant Hill, California, in the East Bay of the San Francisco Bay Area. His father is a retired pharmacist, and his mother continues to run a musical theater company, which Kamrin recalls as a vivid backdrop to his childhood.

“Growing up as a kid, it would not be unusual for my mom to come home and say, ‘Oh, there’s going to be a rehearsal tonight,’ and then within the next hour, 30 people would show up at my house, including orchestra members,” Kamrin says. “Or sometimes I’d get home and she’d say, ‘There will be a cast party here,’ and there would be 12 people I didn’t know in my swimming pool. This was my existence, and I just came to accept it as part of the fun.”

Kamrin was cast in many of his mother’s productions, and grew to love the stage. But acting was never his passion, and Kamrin found, rather early on, that he was drawn more to science and math.

“I kind of rebelled in that way,” he jokes. At the University of California at Berkeley, he majored in engineering physics, a subject that allowed him to explore a diverse mix of classes, including radiation detection, semiconductors, and quantum mechanics. As he dove into the sciences, he also found time for the stage; he remains involved in the UC Berkeley Men’s Octet, an a capella group founded in the 1940s that has twice won the International Championship of Collegiate A Cappella.

In 2003, Kamrin ventured cross-country to MIT to begin a PhD in applied mathematics. It was during this time that he really began to drill down into continuum modeling and to explore the behavior of granular materials, not as discrete particles, but as a continuous mass.

“Standard fluids and elastic solids obey classic continuum models,” Kamrin says. “But as you get into more esoteric materials like sand, there’s a lot of work that needs to be done in figuring out how to model those materials.”

Kamrin initially began his PhD work by trying to generalize a drainage model that his advisor, Martin Bazant, had developed to simulate a pebble bed reactor — a type of nuclear reactor consisting of tennis-ball-sized “pebbles,” each filled with thousands of microfuel particles.

“The whole apparatus is essentially a gumball machine, and you have to engineer these things in a way that you can predict the flow,” says Kamrin, who was trying to modify the model to predict the flow of grains in other geometries. “It seemed like such a fundamental problem.”

Midway through his PhD, Kamrin took a class that helped change his perspective on the problem. The class was on plasticity theory, the study of materials that can undergo permanent deformation in response to forces. While scientists have used continuum models to simulate fluids like water, they’ve had much more difficulty modeling granular materials with the same approach. A fundamental difference between fluids and grains is the plastic yield condition: When a force, such as wind, acts on both materials, fluid ultimately sloshes back to its original configuration with a flat surface, whereas grains remain permanently deformed, such as in the dunes of a desert.

Kamrin spent the second half of his PhD  working principles of plasticity and recent ideas in the granular materials community into a general continuum model for granular media.

After a short stint as a postdoc at Harvard University, Kamrin accepted a junior faculty position in MIT’s Department of Mechanical Engineering in 2011, where he has continued his work in granular materials, and found that he loves to teach.

“It is as much a performance as you want it to be,” says Kamrin, who relishes giving demonstrations as part of 2.002 (Mechanics and Materials). For instance, as a lesson on fracture dynamics, he goes about debunking a classic circus feat, in which a strong person rips a phone book in half.

“There’s a trick to doing that, and if you learn mechanics, you can learn why it works,” Kamrin says. “So I like to yank people out of the audience, teach them how to do it, and make a big show of it.”

To students and junior faculty who are just starting out in their careers, Kamrin has one bit of advice: All the low periods are temporary. While he characterizes his time at MIT as very positive, he remembers one particularly tough funding year.

“Someone had even written me in as a co-investigator on a grant without telling me, but didn’t get it,” Kamrin recalls. “So I lost a grant I didn’t even apply for. At that moment, I looked at myself in the mirror and thought, ‘I can only laugh at this.’”

Things have turned around significantly since then, and today Kamrin leads a group of graduate students and postdocs in running lab experiments and developing continuum models and methods for various materials but still focuses on granular material. He’s applied his models to grain flow in various configurations, from seeds funneling through an industrial hopper, to wheels driving through a bed of sand. He’s currently working on a model that will predict the behavior of wet grains, such as cement flowing down a chute or mud sliding down a hillside.

“The topic of granular media has many open questions, but we’re making progress in understanding the ways these material work.” Kamrin says. “Granular materials are the second most handled material by weight, after water. Transporting grains is a huge part of industry, not just in agriculture, but in pharmaceuticals, and food, and we think our techniques could be useful in modeling many of these processes.”