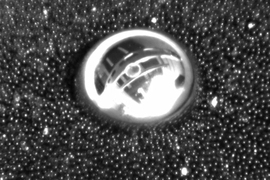 From a mechanical perspective, granular materials are stuck between a rock and a fluid place, with behavior resembling neither a solid nor a liquid. Think of sand through an hourglass: As grains funnel through, they appear to flow like water, but once deposited, they form a relatively stable mound, much like a solid.

Ken Kamrin, an assistant professor of mechanical engineering at MIT, studies granular materials, using mathematical models to explain their often-peculiar behavior. Now Kamrin has applied a recent granular model, developed by his group, and shown that it predicts a bizarre phenomenon called “motion-induced quicksand” — a scenario in which the movement of sand in one location changes the character of sand at a distance.

“The moment you start moving sand, it acts like fluid far away,” Kamrin says. “So, for example, if you’re walking in the desert and there’s a sand dune landslide far away, you will start to sink, very slowly. It’s very wacky behavior.”

Researchers have observed this effect in a number of configurations in the lab, including in what’s called an “annular Couette cell” — a geometry resembling the bowl of a food processor, with a rotating ring in its base. In experiments, researchers have filled a Couette cell with sand, and attempted to push a rod horizontally through the sand.

In a stationary Couette cell, the rod will not budge without a significant application of force. If, however, the cell’s inner ring is rotating, the rod will move through the sand with even the slightest push — even where the sand doesn’t appear to be moving.

“It looks like the mechanical behavior of the sand itself has changed because something was moving far away,” Kamrin says. “How the sand responds to stress has changed entirely.”

While others have observed this effect in experiments, there hasn’t previously existed a model to predict such behavior.

In a paper published in the journal Physical Review Letters, Kamrin and his former postdoc David Henann, now an assistant professor at Brown University, applied the granular-flow model to the problem of motion-induced quicksand, replicating the Couette cell geometry.

By spinning the turntable at the bottom of the bucket, the turntable "liquifies" the entire granular assembly, even the material very far from it. It has converted a granular solid (a material that has no trouble supporting the weight of the ball) to a granular fluid in which any object denser than the granular pile will sink. The ball is acting like a force probe, showing that the response of the grains has switched from solid to fluid. Graphic: Martin Van Hecke/Leiden

Kamrin originally devised the mathematical model to predict scenarios of primary flow, such as the flow field for sand flowing through a chute, or a circular trough. The researchers weren’t sure if the model would also apply to secondary rheology, where motion at a primary location affects movement at a secondary, removed region.

Last summer, Kamrin paid a visit to researchers in France who had carried out earlier experiments on secondary rheology. After some casual discussion, he boarded a train back to his hotel, during which he recalls “having a moment where I thought, ‘I think our model could work.’”

He and Henann ran the model on several configurations of secondary rheology, including the Couette cell, and were able to reproduce the results from previous experiments. In particular, the team observed a direct relationship between the speed of the rotating inner ring and the speed, or “creep,” of the rod through sand: For example, if a constant force is applied to the probe, then spinning the inner ring twice as fast will cause the probe to creep twice as fast — a key observation in laboratory studies

The model is based on the effects of neighboring grains. Where most models would simulate the flow of granular material on a grain-by-grain basis — a computationally laborious task — Kamrin’s continuum model represents the average behavior of a small cube of grains, and builds into the model effects from neighboring cubes. The result is an accurate, and computationally efficient, prediction of granular motion and stress.

Taking the stick out of mud

The mathematical model appears to agree with a general mechanism that researchers have held regarding granular flow, termed a “force chain network.” According to this theory, there exist tiny forces between individual grains that connect the whole of a network. Any perturbation, or movement in the material, can ripple through the network, causing forces between particles to “flicker,” as Kamrin puts it. Such flickering may not be strong enough to move particles, but may weaken bonds between grains, allowing objects to move through the material as if it were liquid.

“Because particles at the wall are connected to particles far away thru the force chain network, by jiggling around over here, you’re making the forces fluctuate thru the material,” Kamrin says. “That’s the picture. But there wasn’t really a general flow model that would reflect this.”

Such forces might partially explain the behavior of quicksand, Kamrin says: While quicksand — a soupy mix of sand and water — may look like a solid, the water in it essentially lubricates the frictional contacts between grains such that when someone steps in it, they sink. In the case of dry granular media, it’s perturbations through the force chain network, not water, that are in essence lubricating the contacts between grains.

“It’s sort of similar, it’s just a different source for what causes the sand to feel lubricated,” Kamrin says.

Kamrin and Henann are now finding ways to package their model into software “so that anybody can download it and predict granular flow.”

“These phenomena are sort of the sticks in the mud that have made granular media an open problem,” Kamrin says. “They’ve made the flow of grains distinct from almost everything we’re used to, like standard solids or regular liquids, because most of those materials don’t have these weird effects.”

This research was funded by the National Science Foundation.

A new wrinkle in online education