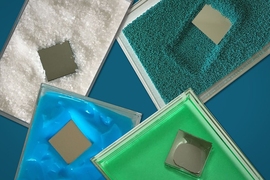 For those of you who take sandcastle building very seriously, listen up: MIT engineers now say you can trust a very simple equation to calculate the force required to push a shovel — and any other “intruder”— through sand. The team also found that the same concept, known as the resistive force theory, can generate useful equations  for cohesive materials like muds.

Aside from calculating the elbow grease needed to carve out a beachside moat, the researchers say the equation can be used to optimize the way vehicles drive over gravel and soil, such as rovers navigating the Martian landscape. It can also help illuminate the ways in which animals such as lizards and worms burrow through earth.

Resistive force theory (RFT) is not new and in fact was proposed in the 1950s to describe the way in which objects move through viscous fluids such as water (on small scales) and honey. It was only much later that scientists thought to apply the same idea to granular material such as sand; they found the theory predicted the force required to move objects through grains even better than its analog for fluids. The reason for this has been a mystery, particularly since predicting granular versus fluid behavior is notoriously difficult.

Ken Kamrin, associate professor of mechanical engineering at MIT, says scientists have regarded granular RFT as “somewhat like magic,” unsure of what makes the concept work so spot-on for sand.

In a paper published today in Nature Materials, Kamrin, along with former MIT postdoc Hesam Askari, have essentially solved this mystery. They report that they have identified a mechanical explanation for why the equation works so well for granular materials. Now, they say that scientists have reason to trust the resistive force theory to give accurate force estimates through sand, and even pastier materials like mud and gels.

“People observed this concept worked but didn’t know why, and that’s really shaky ground for scientists — is it just a coincidence?” Kamrin says. “Now we can explain the backbone of the granular resistive force theory, so you can close your eyes and have confidence that it’s going to work. It gives us some fleeting hope that we might be able to design something that more efficiently moves, swims, or drives over sand.”

Granular RFT works like this: Imagine you are working with a shovel, buried at a certain depth in the sand. You want to know how much to push on the shovel, to move it in a particular direction. To answer this question, you first need to do some experiments with a small, square plate, made from the same material as your shovel. Push the plate through sand, starting from all possible orientations and moving in all possible directions. During each test, measure the amount of force it takes to move the plate.

According to the theory, you can think of the shovel as an assemblage of similar small plates. To estimate the force required to move the shovel, simply imagine each plate is on its own and add up all the tiny, individual forces of each plate, at each specific location and orientation along the shovel. As it turns out, this theory works remarkably well for granular materials, and somewhat well in fluids.

“If something is working well, it would be nice to know why,” Kamrin says. “There may be a large set of problems you might solve if you knew why the intrusion problem is so easy to figure out in sand.”

A push and a shove

Kamrin set out to write the simplest equation he could think of that would represent granular flows, to see whether the equation, and the mechanical relationships it defines, could also reproduce the simplified picture assumed in resistive force theory. If so, he reasoned, the equation — also called a continuum model — could give a mechanical explanation for why RFT works, and furthermore, validate the theory.

The equation he came up with is a variant of a standard model, based on Coulomb’s yield criterion, a simple criterion that determines whether granular material will flow or not. Imagine a collection of sand compressed between your hands. Coulomb’s equation states that in order to slide one hand against the other the shear stress — akin to the force applied to slide your hands — divided by the surrounding pressure — squeezing the sand together — must equal something called the friction coefficient. If this ratio reaches the friction coefficient (determined by the sand’s properties), your hand will move.

Kamrin added one more ingredient to the equation: a separation rule, to account for the fact that sand, in general, does not stick together. For example, if you move a shovel through sand, it will create a temporary hole behind the shovel that is immediately refilled with in-falling sand — a realistic phenomenon that Kamrin says is important to include, to accurately represent sand flow, particularly in “intrusion” scenarios such as pushing a shovel through sand.

Kamrin and Askari applied their continuum model in finite element simulations in which they simulated a simple plate moving through granular media in many ways. The simulation was designed to mimic actual experiments performed by others. They found that both the flow of the grains and the force against the plate matched what others had observed in their experiments.

The team then simulated more complex objects, such as a circle and a diamond, moving through sand, using first their continuum model and then RFT with their previous plate simulations serving as the RFT inputs. Both simulations produced nearly identical results and predicted the same force value needed to move both objects. When the researchers pushed the simulation to model three-dimensional objects, both the continuum model and RFT again generated the same answers.

“The agreement is unbelievably good,” Kamrin says. “It turns out RFT happens to work really well, thanks to an interesting property in the Coulomb continuum model.”

“Out of a sticky situation”

Interestingly, this simplification does less well in predicting the force applied to an object through fluid. When Kamrin and Askari modeled an object — in this case, a simple garden hoe — through fluid, the force from the viscous flow equations was inherently incompatible with the sum of forces from separate small plates.  When the material model was switched to the granular model, the total force exactly matched what a sum of small independent plate forces would give.

“In some sense, this is a litmus test,” Kamrin says. “In the end, it proves the granular continuum model perfectly agrees with the resistive force theory in a class of representative problems.”

To see if RFT could make accurate predictions in any other material besides grains, the researchers “went through the Rolodex of materials that have modeling equations,” and found using a similar test that indeed, RFT could also apply to certain cohesive materials like pastes, gels, and mud.

Kamrin says now scientists can rely on RFT to help solve many traction-related problems. But could the equation also help one get out of, say, quicksand?

“Let’s put it this way: Either way, you need to do a bit of work to figure out how to push yourself out of quicksand,” Kamrin says. “But in the right circumstances RFT divides the amount of work by a whole lot. You don’t have to solve differential equations anymore. Just give me a couple charts and a piece of paper and a pen, and I can calculate my way out of a sticky situation.”

“Now that we know that RFT is a consequence of plasticity, scaling relations can be developed to understand pros and cons of different vehicle running gear and animal appendages, like, how do large and small tires compare? How do flipper-like feet versus long skinny feet compare? How do different body shapes affect sand-swimming performance?” says Daniel Goldman, associate professor of physics at Georgia Tech, who was not involved in the research. “There are still many aspects of these interactions that are not yet tested against RFT, like situations when animals step into material that their feet have previously disturbed, but Ken's work can lead to predictions that we can test.”

This research was supported, in part, by the Army Research Office.