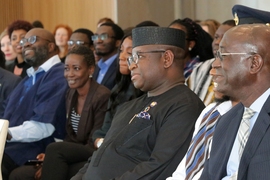 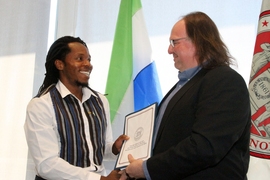 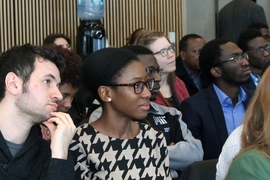 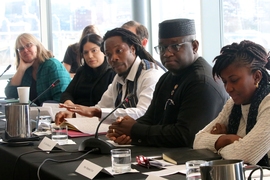 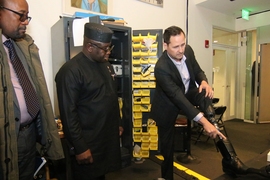 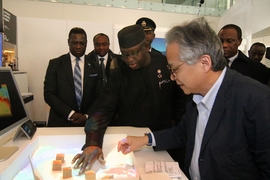 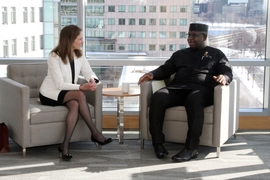 In just 10 months in office as the Republic of Sierra Leone’s fifth democratically elected president, Julius Maada Bio has already laid out and begun to implement one of Africa’s most ambitious agendas, aimed at transforming the impoverished nation into a major hub for technology and innovation. In a visit to MIT on Thursday, he stressed the importance of partnerships and alliances in bringing this vision to reality, and talked about some initial collaborations with MIT that are already underway, with more under discussion.

The visit, which included a delegation of officials from Sierra Leone and continued on to a series of meetings at Harvard University, was initiated by MIT alumnus David Moinina Sengeh, SM ’12, PhD ’16, who was appointed last year by President Bio to head the newly created Directorate of Science, Technology, and Innovation (DSTI) and to serve as chief innovation officer.

The visit included a tour of MIT’s Media Lab, where Sengeh earned his master’s and doctorate degrees. The tour was led by the lab’s founding director Nicholas Negroponte and included visits to several different research groups. The Media Lab has already signed a memorandum of understanding with the Sierra Leone government, initiating a series of collaborations including opportunities for visiting students and joint research projects between MIT and universities in Sierra Leone.

In introducing President Bio for a public talk before the tour, MIT Vice President for Open Learning Sanjay Sarma described the recently elected president’s “very ambitious and inspiring national development plan” for the next five years, “which focuses on ‘human capital’ development, [including] health and education, a diversified and resilient green economy, strengthening an inclusive, just, peaceful state, and a competitive economy with a well-developed infrastructure.”

President Bio (pronounced “BEE-oh”) said that already, “we’ve been able to accomplish quite a lot,” despite having “inherited a nearly bankrupt state,” saddled with huge debt and failing institutions. While many people outside the small West African nation so far mostly associate it with its brutal war and its outbreak of the ebola virus, he said, “what we want to do is change all of that narrative.”

He said that while this is “a daunting task, I admit,” it’s one they have already begun to make progress on. As one measure to begin dealing with their strained economy, the government has set up an independent commission of inquiry focused on corrupt officials from past administrations, with the aim of recovering money that was pilfered from public funds, and using it toward the new development goals.

In working to bring about sustainable development, Bio said, “you cannot do that without a quality education.” One of the essential needs is for “people and institutions who can share knowledge, valuable knowledge that is good for our development.” Part of the reason for his trip to Cambridge, he said, was to seek out ways of fostering such knowledge-sharing through an emphasis on collaborations with leading thinkers, institutions, and groups.

In a nation where 60 percent of adults can’t read or write, education is clearly a key need, and that has become “our flagship program,” he said. Investing in Sierra Leone’s human capital, he said, is the best investment they can make as a nation. They have already declared their intention to support free, quality education for all, from preprimary through high school, he said. “That is ongoing now,” despite the nation’s limited financial resources, so that “even the poorest of the poor” will have access to new opportunities.

A second part of his three-pronged plan, he said, is to make sure that those educated brains are housed in bodies that are healthy and strong, by improving access to quality health care. And finally, to maintain those healthy bodies, another essential part of the plan is to work toward greater food and water security.

To encourage investment in the nation, he is working to streamline and simplify tax codes and regulations, to make it easier for businesses to become established there. “We want to set up a one-stop shop for all investments” to help guide entrepreneurs through the process, he said. The nation has strong potential for new industries in solar energy, natural gas, and other energy technologies, he said.

The new and growing collaborations with MIT might help in that process. With support from the MIT International Science and Technology Initiatives, four MIT students, along with Ethan Zuckerman, director of the Media Lab’s Center for Civic Media, have already spent time in Sierra Leone, working with the DSTI to advance existing research projects and assist in software development projects. The recently signed memorandum of understanding with the Media Lab will allow more such visits to take place, including work on a water monitoring project, and DSTI researchers will also be spending time doing research at the Media Lab; similar exchanges are expected over the summer. Meanwhile, discussions about further collaborations are ongoing.

Sengeh, speaking at the public talk, drew comparisons between the atmosphere of MIT and what he sees in his home country. “The same things that are true at MIT are also true at Freetown,” the capital city, he said. He cited the same kind of freedom to explore ideas creatively that he experienced at MIT and also in Sierra Leone’s statehouse with the new directorate. “We’re lucky to have a leadership in Freetown who create that sense of freedom for thinking about science and innovation. … The president and I talk about blockchain in his office, yes, we talk about IoT [the internet of things]. And that is a wonderful and special place to be in, where you have a leadership who engage technically.”

Speaking about the new agreements on cooperation, Sengeh said “what is amazing about this relationship is I know that Sierra Leone and MIT will be together, and this is an equal co-partnership that is based on mutual respect, empathy, and a desire to change the world.”