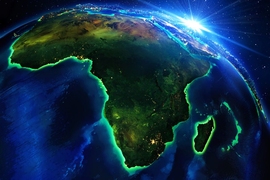 “We hope it inspires people to go out and deliver promises on their ideas,” Githuku said. “You can have tangible impact just by applying innovative techniques and being a little patient in the way you do it.”

The conference also included a business-plan competition, where MIT teams competed for a grand prize of $4,000, a $2,000 second-place prize, and a $1,000 audience-choice award. Six teams competed, with ideas that included an “Uber model” for Africa’s large minibus market and science-experiment lessons using repurposed items in Ghana.

Keynote speakers were Mostafa Terrab SM ’82, PhD ’90, chairman and CEO of OCP Group, a Moroccan company that leads the world in phosphate rock and phosphoric acid production, and Arnold Ekpe, chairman of AtlasMara, a financial-services firm in Africa.

With a number of speakers who were MIT students and researchers, Githuku said, “We’re trying to build the connection MIT has with Africa, and highlight the similarities in the ethos, which is all about innovation.”

The conference was organized the African Business Club, with help from the MIT African Students Association and the MIT-Africa Initiative — whose faculty director, Hazel Sive, a professor of biology and a native of South Africa, was on hand to deliver opening remarks.

A topic in common among the three panel discussions — “The Next Generation of Entrepreneurs,” “Building the African Supply Chain,” and “Connecting the Continent” — was how novel technologies have improved Africa’s supply chain, and its mobile and health care industries.

In discussing Dimagi’s impact, Zue referenced his company’s role in designing SmartCare, one of Africa’s largest electronic health record systems, across Zambia. The system uses smart cards that contain every user’s entire medical record, and has been deployed by Zambia’s Ministry of Health with 200,000 patients.

One thing that’s surprising, Zue said, is Zambia now tops the U.S. in its maintenance of health care records. “That’s better health care than we have in the U.S., in terms of informatics,” he said.

Another panelist, Nathan Eagle PhD ’05, founded Jana, which has partnered with 237 mobile operators to give more than 25 million prepaid cellphone users across Africa, Asia, and Latin America free data for watching ads and participating in surveys. So far, Jana has generated more than 480 terabytes of free data.

With Dimagi and Jana, said panel moderator Joost Bonsen, a Media Lab lecturer, some Africans are “living the future. … These countries are places where the future is being prototyped,” Bonsen said. “They’re living labs for how the rest of us, in the future, might [develop].”

The “Building the African Supply Chain” panel addressed, among other things, how technological innovations have improved supply chains in facilitating international trade and servicing burgeoning markets.

Among other things, Goentzel said, mobile technologies are enabling anti-counterfeiting measures for, say, pharmaceuticals, with receivers able to send text messages with codes to verify authenticity. “In some cases, it’s life-saving,” he said.

In his Vision Talk, Ghana native and MIT alumnus Kwami Williams ’12 discussed his startup, MoringaConnect, which trains farmers to grow and shell the abundant Moringa plant for its valuable seeds and leaves — a project, started in MIT’s D-Lab, that earned Williams a D-Lab Scale-Up Fellowship in 2013.

Williams described the Moringa tree as an “underutilized supercrop” whose seeds contain oil that can be used for cosmetics and leaves that are very nutritious. But some farmers are feeding the plants to cows. With MoringaConnect, Williams said, farmers are now selling the seeds for supplemental income, and using the leaves for nutrition.

But Williams used MoringaConnect as a jumping-off point to address agriculture issues across Africa — which, he said, has 1.5 billion acres of arable land, but spends more than $40 billion annually on imported food. “There are immense agricultural potential and untapped resources that you and I have a role in realizing,” Williams said.

For instance, he explained, in Ghana mangos often cover the roads. “This is immense waste,” Williams said. “What would it take to take this abundance of mangoes, dry it, and get it to consumers who need it for nutrition and want it because it’s delicious? The time is now for us to … start to build the Africa that we dream of.”

David Sengeh, a PhD student in the Media Lab and Sierra Leone native, delivered the other Vision Talk, focusing on his nonprofit Global Minimum Inc., which provides young inventors in his home country with resources to eliminate the need for foreign aid.

Six teams competed in this year’s business-plan competition. Each had a few minutes to pitch an idea and field questions from four judges. Previous competitors, such as Disease Diagnostic Group, have gone on to win MIT’s $100K Entrepreneurship Competition. “We like to think this is a proving ground for [startups],” Githuku said.

First place this year went to the Practical Education Network (PEN), which has developed hundreds of lesson plans for teachers in Ghana that involve repurposing low-cost materials for hands-on science experiments. Jam jars can be used for beakers, for instance, and batteries can be used for crude weights.

The plan, Beem told the judges, is to launch PEN in Ghana, but scale it across Africa. “With your support, we can help teachers across the continent use hands-on science to inspire and engage the next generation,” she said.

Second place went to MDaaS, which leases medical equipment to hospitals. Audience-choice recipient was MatatuMoney, whose business model resembles Uber, but for the massive minibus market in African countries.

Other teams included Addis Ideas, which aims to crowdsource development ideas from Africans; Airspress, a digital marketplace where users ask travelers to bring goods to other countries to avoid high shipping fees; and Safire, which developed novel ways to break down biomass.