Across the slums of Lagos, a startup’s bikes have removed 600 tons of recyclables in return for rewards.
Rob Matheson | MIT News Office
Publication Date:
Press Inquiries 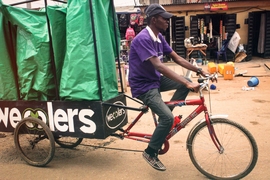 ↓ Download Image
Caption: An employee rides one of the Wecyclers' cargo bikes. The startup employs locals to ride door-to-door across the slums of Lagos, Nigeria, to collect recyclables.
Credits: Courtesy of Wecyclers 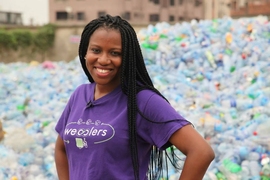 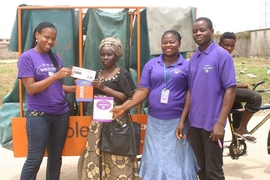 ↓ Download Image
Caption: A local woman exchanges points she earned for recycling through Wecyclers for food.
Credits: Courtesy of Wecyclers

Caption:
An employee rides one of the Wecyclers' cargo bikes. The startup employs locals to ride door-to-door across the slums of Lagos, Nigeria, to collect recyclables.
Credits:
Courtesy of Wecyclers

Caption:
A local woman exchanges points she earned for recycling through Wecyclers for food.
Credits:
Courtesy of Wecyclers

Growing up in Lagos, Nigeria, Bilikiss Adebiyi MBA ’12 witnessed a waste epidemic in the city’s slums, where many of her relatives lived: Plastic bottles, aluminum cans, and other waste accumulated in streets and open gutters, causing flooding, disease, and stress.

Images of these trash piles remained vivid in Adebiyi’s mind in 2010, when she was a graduate student at the MIT Sloan School of Management. So when she took the D-Lab course MAS.665 (Development Ventures), which focuses on launching ventures in developing countries, “Something awoke in me to help solve the issue,” Adebiyi says.

Partnering with classmate Alexandra Fallon MBA ’12, she launched Wecyclers, which now deploys a fleet of cargo bikes to collect recyclables from houses in poor areas of Lagos, in return for rewards.

Launched in 2012, the startup has collected more than 600 tons of recyclables, with more than 6,500 households signed on to its program. Each house has about five people, Adebiyi adds, “so we’ve impacted more than 30,000 lives.”

The startup has also created 75 jobs, which include 25 cyclists — also called “Wecyclers” — processing-plant workers, and others in a city with an unemployment rate of more than 20 percent.

The startup works by employing locals who pedal door-to-door on modified bikes that pull large carts with collection bags. They collect recyclables from subscribers’ homes and weigh them; subscribers receive points via text message for every kilogram of recyclables. Points can be redeemed for food and consumer goods, such as cellphones and kitchen items.

Recyclables are returned to one of Wecyclers’ two plants, where they’re sorted, processed, and bought by recycling companies to make mattresses and pillow stuffing, among other things. Adebiyi calls it “‘everyone wins’ recycling.”

Working closely with the Lagos Waste Management Authority, Wecyclers soon plans to sign up 1 million homes across Nigeria’s most populous city, and even more elsewhere in the country. In doing so, Adebiyi estimates Wecyclers could create 500,000 direct and indirect jobs, taking into account cyclists, processing-plant workers, and those needed to construct bicycles. “The idea is to make opportunities for people to plug into our model and create those jobs,” she says.

In Lagos, recycling trucks and vans are expensive to run, and even the limited trucks in service can’t make it down many unpaved roads. Because of this, among other things, Adebiyi says the city collects only 40 percent of its waste, and only around 13 percent of recyclables are salvaged from landfills.

Sometimes, refuse piles up in gutters, causing blockages. When it rains, Adebiyi says, water floods into homes, and homeowners can be “knee-deep in dirty, stagnant water,” which gives rise to mosquitoes and, in turn, malaria.

Another issue is that people living in the Lagos slums never really saw the value in recycling, Adebiyi says. “The first thing is survival,” she says. “Recycling is considered a luxury, when they’re thinking, ‘Let’s first feed ourselves.’”

But with Wecyclers, she’s hoping to change that frame of mind: “Now we’re showing them they can, in fact, feed themselves by recycling.”

Every few months, subscribers to Wecyclers can redeem their points. Many start off redeeming for simple household items, such as bowls and silverware. After saving up points, they’re able to exchange their points for increasingly valuable items, such as sewing machines and, soon, refrigerators.

Many of these rewards have enabled better lives and business, Adebiyi says. Coolers, for instance, are powerful business tools for many in Lagos. “There’s a network of women who cook and sell food around the city; they spend all day working outside,” she says. “Keeping food hot had always been a luxury. Now they have that ability.”

Participants can also buy up consumer electronics, such as cellphones, irons, and toaster ovens. The rewards program is funded by the sale of the collected waste and through corporate sponsorships from the likes of Coca-Cola — which joined after learning that many of its bottles and cans were littering the streets of Lagos, Adebiyi says.

Adebiyi says becoming a Wecycler is comparable to having a delivery-driver gig in the U.S. Many are young men looking for cash for school, or to provide for their families. Many of the staff — such as sales reps and processing-plant workers — were previously living in poverty.

In fact, Adebiyi met one of her managers when he was living in a garbage dump. She gave him a job bagging recyclables, and soon he moved up the ranks. “We want to empower people to use recycling as a way to work out of poverty,” she says.

Adebiyi adds that the Wecyclers team was always “really good at finding opportunities at MIT for support.”

For a class project in MAS.665, taught by Media Laboratory lecturer Joost Bonsen, Adebiyi, Fallon, and the rest of their team conceived an idea that involved Nigerians delivering recyclables to kiosks for rewards. Inspired to take it to the next step, they got a grant from MIT’s Public Service Center to test the idea in Lagos — but found that specific approach doomed to fail: Surveys revealed many Nigerians saw it as an inconvenience. After working long days, they just didn’t have time to return recyclables to a remote kiosk, even with rewards on the table.

So the team refined their idea as Wecyclers, eliminating the need to travel to kiosks and earning a prize in the 2012 MIT IDEAS Competition. That year, they joined the inaugural class of MIT’s Founders Skills Accelerator summer program, which gives entrepreneurs skills and resources to launch startups. “That really gave us a lot of structure and ideas we needed to get started,” Adebiyi says.

With funds and know-how, Adebiyi and Fallon soon returned to Lagos, launching Wecyclers — but still in drastic need of bikes: A simple wagon attached to a bicycle was too difficult for riders to power.

Jack Whipple, the D-Lab workshop manager since 2012, traveled to Lagos to help Wecyclers design and build human powered cargo vehicles. The final design selected was a cargo tricycle: Working with local craftsmen, they fabricated a cargo section suited to Wecyclers' needs and local road conditions, and attached a tricycle drivetrain with a locally sourced bicycle as the front end. A few years later, a D-Lab student team worked with Wecyclers, and one D-Lab student wrote his undergraduate thesis on a Wecyclers engineering issue.

Over the years, Wecyclers has also earned an MIT Legatum Center seed grant, a Carroll L. Wilson Award, a D-Lab Scale-Ups Fellowship for $20,000, and prizes from the MIT $100K Entrepreneurship Competition and the MIT Sloan Africa Business Plan Competition.

Adebiyi remembers fondly the MIT students who helped her grow Wecyclers — from helping conceive the idea to crafting grant proposals, and more. She recalls one close friend who fell down stairs while rushing to the MIT Sloan library to help her write an application for an Echoing Green Fellowship. “He had someone call me out of the library. I walked up to him, [and] he was lying on the ground. Blood was gushing from his face and the first thing he said to me was, ‘Sorry I’m late,’” Adebiyi says, laughing.

The student eventually helped Adebiyi finish the application, which earned her and Wecyclers the $80,000 fellowship. “It’s those kind of people I found at MIT,” she says.