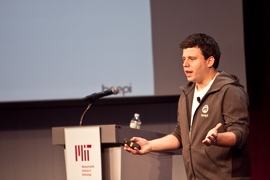 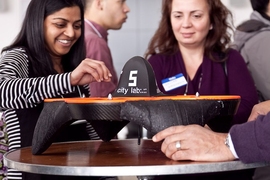 ↓ Download Image
Caption: Participants check out one of the drone quadcopters developed by the MIT student team, Waterfly. The drone is part of a more numerous, automated “swarm” of drones designed to talk to each other while gathering data.
Credits: Photo: Anna Shaynurova 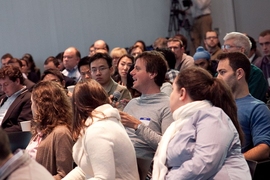 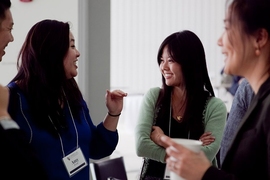 Caption:
Participants check out one of the drone quadcopters developed by the MIT student team, Waterfly. The drone is part of a more numerous, automated “swarm” of drones designed to talk to each other while gathering data.
Credits:
Photo: Anna Shaynurova

Today’s most innovative technologies and tech-driven ideas — such as wearable electronics, the “Internet of things,” big data, and crowdsourcing — are forever changing the way we connect to one another and conduct business.

On Saturday at the MIT Media Lab, a host of entrepreneurs and executives converged at a student-run conference to discuss how they’ve leveraged these technologies, and others, to improve business, human interaction, and urban planning — and to inspire others to do the same.

“In a nutshell, it’s about making ‘civilization 2.0,’” said Kevin Yu, a graduate student in the MIT Sloan School of Management, and co-chair of this year’s MIT Infinite Labs Tech Conference, along with classmate Brian Bozzello.

For the first time, the annual conference also included a tech competition that gave three student teams — which are developing novel drones, facial-recognition software, and black solar panels — a shot at a $3,000 prize. The winning team, Waterfly, is developing a fully automated “swarm” of drones that can talk to each other to help with data retrieval.

Each year, students in the MIT Sloan Tech Club organize the conference. This year’s theme was “Enabling Society” — or how technologies “are enabling better connections” between humans and businesses, Yu said.

Nearly all of the speakers were founders or executives of companies that are putting “enabling” technologies to good use — such as crowdsourcing coding or data input, utilizing peer-to-peer services, selling wearables, or using big data for market research.

Keynotes were given by Ale Resnik MBA ’13, co-founder and CEO of Beepi, a peer-to-peer car marketplace; Brad Coffey, vice president of product and corporate development for software firm Hubspot; Jag Duggal, vice president of product management at Quantcast, which gathers data on audience reactions to marketing; and Sridhar Iyengar, co-founder of Agamatrix, which makes smart glucose monitors, and Misfit Wearables, which sells devices that track heart rate and sleep patterns, among other things.

The “granular level’’ of business

Much of the content focused on what Yu called the “granular level” of building successful businesses around novel technologies. The aim, he added, was to prepare audience members for challenges they may face as tech entrepreneurs.

An inspiring story came from Resnik, who talked about the surprising ease with which he took Beepi from a concept at MIT Sloan to a venture backed by $80 million in funding in 18 months. The company sends experts to conduct rigorous inspections of sellers’ cars. Approved cars — only about one-quarter of those inspected — then go up for sale on the company’s website; buyers can have the cars shipped for free within days.

Because so many people have bad experiences with buying cars through dealerships — a business model that hasn’t changed in decades — Resnik said his company was able to gain customers rapidly. (Resnik launched Beepi after a car he bought from a dealership caught fire within days of purchase.)

Resnik said his company’s rapid rise is just one example of the shift in public trust toward peer-to-peer online services — which many entrepreneurs have capitalized on. “There’s been a whole trend of people starting to understand that you can get a better experience and better deal by buying online,” he said.

In his keynote, Iyengar explained how designing wearable devices for consumers — like he did with Agamatrix and Misfit — “is not a technological problem; it’s a psychological one.”

People often don’t use wearables, Iyengar said, simply because they forget them, or find no need for them. His advice for crafting more consumer-friendly wearables: Make them easy to use, enjoyable, relevant to a user’s life, and meaningful in some way. One way to create emotional bonds with such products is to provide devices in various colors, he said, noting a medical-device company whose most successful campaign involved colorful glucose monitors.

Among other things, the future of work session asked its panelists to identify some of today’s most enabling technologies for businesses. Michael Morris, general manager of TopCoder, which hosts coding contests and matches programmers with employers, said Amazon Web Services allowed his company to easily connect to coders anywhere. “That changed the game 100 percent for us,” Morris said, adding, “The next is cloud services, where we can actually go from development to [quality assurance] to production all like that. Those technologies are making it easier for crowdsourcing to work all the way through production.”

What’s up at MIT?

During the tech competition, attendees caught a glimpse of some early-stage prototypes — of smart drones, facial-recognition security devices, and advanced solar panels — designed by MIT students.

Two members of Waterfly demonstrated a pair of drone quadcopters — part of a more numerous “swarm” — that are designed to talk to each other and pick up the slack if any members of the squad break down.

The goal is to enable more efficient automation of data collection, said co-inventor Antoine de Maleprade, a graduate student working in MIT’s Senseable City Lab. He gave an example of several drones using infrared imaging to locate high concentrations of algae in a body of water. If one drone spots high concentrations, it will tell another where to land for a reading. “We really are working on automated drones that work together, communicating like a swarm of insects, to help each other out,” de Maleprade said.

Another competitor, Sentry, showcased its facial-recognition “doorman” — developed and built using off-the-shelf parts. When someone comes to the door, the device will compare that person’s face to photos on the homeowner’s social media accounts, and then send a text letting the resident know if it’s someone familiar.

“If that person is in, say, 60 out of 100 Facebook photos, they’ll get a green light,” explained Anwar Hussain MBA ’13, who co-invented the technology. “If they’re in 30 or so, they’ll get a yellow light. If they’re in no photos, we’ll send an alert that they could be a stranger.”

The other competing team was AntiDark, which invented a solar canvas that can accept solar cells of any voltage or brand.