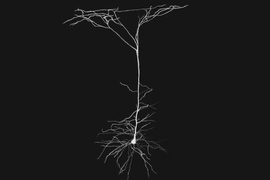 Most neurons have many branching extensions called dendrites that receive input from thousands of other neurons. Dendrites aren’t just passive information-carriers, however. According to a new study from MIT, they appear to play a surprisingly large role in neurons’ ability to translate incoming signals into electrical activity.

Neuroscientists had previously suspected that dendrites might be active only rarely, under specific circumstances, but the MIT team found that dendrites are nearly always active when the main cell body of the neuron is active.

“It seems like dendritic spikes are an intrinsic feature of how neurons in our brain can compute information. They’re not a rare event,” says Lou Beaulieu-Laroche, an MIT graduate student and the lead author of the study. “All the neurons that we looked at had these dendritic spikes, and they had dendritic spikes very frequently.”

The findings suggest that the role of dendrites in the brain’s computational ability is much larger than had previously been thought, says Mark Harnett, who is the Fred and Carole Middleton Career Development Assistant Professor of Brain and Cognitive Sciences, a member of the McGovern Institute for Brain Research, and the senior author of the paper.

“It’s really quite different than how the field had been thinking about this,” he says. “This is evidence that dendrites are actively engaged in producing and shaping the outputs of neurons.”

Graduate student Enrique Toloza and technical associate Norma Brown are also authors of the paper, which appears in Neuron on June 6.

Dendrites receive input from many other neurons and carry those signals to the cell body, also called the soma. If stimulated enough, a neuron fires an action potential — an electrical impulse that spreads to other neurons. Large networks of these neurons communicate with each other to perform complex cognitive tasks such as producing speech.

Through imaging and electrical recording, neuroscientists have learned a great deal about the anatomical and functional differences between different types of neurons in the brain’s cortex, but little is known about how they incorporate dendritic inputs and decide whether to fire an action potential. Dendrites give neurons their characteristic branching tree shape, and the size of the “dendritic arbor” far exceeds the size of the soma.

“It’s an enormous, far-flung antenna that’s listening to thousands of synaptic inputs distributed in space along that branching structure from all the other neurons in the network,” Harnett says.

Some neuroscientists have hypothesized that dendrites are active only rarely, while others thought it possible that dendrites play a more central role in neurons’ overall activity. Until now, it has been difficult to test which of these ideas is more accurate, Harnett says.

To explore dendrites’ role in neural computation, the MIT team used calcium imaging to simultaneously measure activity in both the soma and dendrites of individual neurons in the visual cortex of the brain. Calcium flows into neurons when they are electrically active, so this measurement allowed the researchers to compare the activity of dendrites and soma of the same neuron. The imaging was done while mice performed simple tasks such as running on a treadmill or watching a movie.

Unexpectedly, the researchers found that activity in the soma was highly correlated with dendrite activity. That is, when the soma of a particular neuron was active, the dendrites of that neuron were also active most of the time. This was particularly surprising because the animals weren’t performing any kind of cognitively demanding task, Harnett says.

“They weren’t engaged in a task where they had to really perform and call upon cognitive processes or memory. This is pretty simple, low-level processing, and already we have evidence for active dendritic processing in almost all the neurons,” he says. “We were really surprised to see that.”

The researchers don’t yet know precisely how dendritic input contributes to neurons’ overall activity, or what exactly the neurons they studied are doing.

“We know that some of those neurons respond to some visual stimuli, but we don’t necessarily know what those individual neurons are representing. All we can say is that whatever the neuron is representing, the dendrites are actively participating in that,” Beaulieu-Laroche says.

While more work remains to determine exactly how the activity in the dendrites and the soma are linked, “it is these tour-de-force in vivo measurements that are critical for explicitly testing hypotheses regarding electrical signaling in neurons,” says Marla Feller, a professor of neurobiology at the University of California at Berkeley, who was not involved in the research.

The MIT team now plans to investigate how dendritic activity contributes to overall neuronal function by manipulating dendrite activity and then measuring how it affects the activity of the cell body, Harnett says. They also plan to study whether the activity patterns they observed evolve as animals learn a new task.

The research was funded by the Natural Sciences and Engineering Research Council of Canada and the U.S. National Institutes of Health.