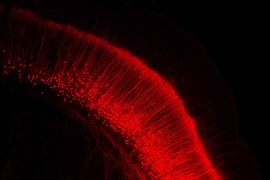 ↓ Download Image
Caption: Researchers at MIT and the Allen Institute for Brain Science have developed a new modified version of the rabies virus that stops replicating once it infects a cell, allowing it to deliver its genetic cargo without harming the cell.
Credits: Courtesy of the researchers

Caption:
Researchers at MIT and the Allen Institute for Brain Science have developed a new modified version of the rabies virus that stops replicating once it infects a cell, allowing it to deliver its genetic cargo without harming the cell.
Credits:
Courtesy of the researchers

For the past decade, neuroscientists have been using a modified version of the rabies virus to label neurons and trace the connections between them. Although this technique has proven very useful, it has one major drawback: The virus is toxic to cells and can’t be used for studies longer than about two weeks.

Researchers at MIT and the Allen Institute for Brain Science have now developed a new version of this virus that stops replicating once it infects a cell, allowing it to deliver its genetic cargo without harming the cell. Using this technique, scientists should be able to study the infected neurons for several months, enabling longer-term studies of neuron functions and connections.

“With the first-generation vectors, the virus is replicating like crazy in the infected neurons, and that’s not good for them,” says Ian Wickersham, a principal research scientist at MIT’s McGovern Institute for Brain Research and the senior author of the new study. “With the second generation, infected cells look normal and act normal for at least four months — which was as long as we tracked them — and probably for the lifetime of the animal.”

Soumya Chatterjee of the Allen Institute is the lead author of the paper, which appears in the March 5 issue of Nature Neuroscience.

Using two-photon microscopy, researchers can image fluorescent cells in the brains of live mice. These two images were taken of the same group of neurons in visual cortex at nine days (left) and 22 days (right) following injection of a first-generation rabies viral vector encoding a red fluorescent protein. The vast majority of infected neurons visible at the earlier time point are gone by the later imaging session.

These two images show the same group of neurons in visual cortex at four weeks (left) and eight weeks (right) following injection of a second-generation rabies viral vector encoding Cre recombinase, which causes cells in these transgenic mice to express a red fluorescent protein. All neurons visible at the earlier time point are still present at the later one.

Rabies viruses are well-suited for tracing neural connections because they have evolved to spread from neuron to neuron through junctions known as synapses. The viruses can also spread from the terminals of axons back to the cell body of the same neuron. Neuroscientists can engineer the viruses to carry genes for fluorescent proteins, which are useful for imaging, or for light-sensitive proteins that can be used to manipulate neuron activity.

In 2007, Wickersham demonstrated that a modified version of the rabies virus could be used to trace synapses between only directly connected neurons. Before that, researchers had been using the rabies virus for similar studies, but they were unable to keep it from spreading throughout the entire brain.

By deleting one of the virus’ five genes, which codes for a glycoprotein normally found on the surface of infected cells, Wickersham was able to create a version that can only spread to neurons in direct contact with the initially infected cell. This 2007 modification enabled scientists to perform “monosynaptic tracing,” a technique that allows them to identify connections between the infected neuron and any neuron that provides input to it.

This first generation of the modified rabies virus is also used for a related technique known as retrograde targeting, in which the virus can be injected into a cluster of axon terminals and then travel back to the cell bodies of those axons. This can help researchers discover the location of neurons that send impulses to the site of the virus injection.

Researchers at MIT have used retrograde targeting to identify populations of neurons of the basolateral amygdala that project to either the nucleus accumbens or the central medial amygdala. In that type of study, researchers can deliver optogenetic proteins that allow them to manipulate the activity of each population of cells. By selectively stimulating or shutting off these two separate cell populations, researchers can determine their functions.

To create the second-generation version of this viral tool, Wickersham and his colleagues deleted the gene for the polymerase enzyme, which is necessary for transcribing viral genes. Without this gene, the virus becomes less harmful and infected cells can survive much longer. In the new study, the researchers found that neurons were still functioning normally for up to four months after infection.

“The second-generation virus enters a cell with its own few copies of the polymerase protein and is able to start transcribing its genes, including the transgene that we put into it. But then because it’s not able to make more copies of the polymerase, it doesn’t have this exponential takeover of the cell, and in practice it seems to be totally nontoxic,” Wickersham says.

The lack of polymerase also greatly reduces the expression of whichever gene the researchers engineer into the virus, so they need to employ a little extra genetic trickery to achieve their desired outcome. Instead of having the virus deliver a gene for a fluorescent or optogenetic protein, they engineer it to deliver a gene for an enzyme called Cre recombinase, which can delete target DNA sequences in the host cell’s genome.

This virus can then be used to study neurons in mice whose genomes have been engineered to include a gene that is turned on when the recombinase cuts out a small segment of DNA. Only a small amount of recombinase enzyme is needed to turn on the target gene, which could code for a fluorescent protein or another type of labeling molecule. The second-generation viruses can also work in regular mice if the researchers simultaneously inject another virus carrying a recombinase-activated gene for a fluorescent protein.

The new paper shows that the second-generation virus works well for retrograde labeling, not tracing synapses between cells, but the researchers have also now begun using it for monosynaptic tracing.