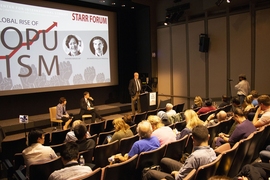 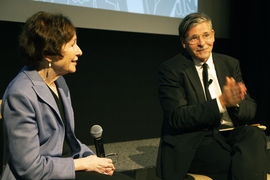 We are living in an age of populism, according to a wide array of pundits and politicians. But what does that mean, exactly? Some high-profile scholars examined that issue at an MIT public forum on Thursday, discussing the key hallmarks of populism, as well as its relationship to global economics.

While populist politicians have growing prominence and power in Europe and around the world, arriving at a working definition of the subject is not easy, noted MIT political scientist Richard Samuels, in introductory remarks.

Populism is “a very complex phenomenon,” said Samuels, the Ford International Professor of Political Science and director of the MIT Center for International Studies (CIS), adding that there is significant “diversity that’s hidden … within the simple label of populism.”

Moreover, Samuels said, the promises of populists during campaigns do not always match the reasons they seek power, making it all the more important to look under the surface of the movement.

Thursday’s event, ‘The Rise of Global Populism,” was held in MIT’s Bartos Theater, with an audience of about 200 people. The panel was part of the Starr Forum series hosted by CIS.

The event featured two other scholars: Jan-Werner Mueller, a professor of politics at Princeton University and author of the recent book “What Is Populism?” and Suzanne Berger, a professor of political science and MIT’s inaugural John M. Deutch Institute Professor. Berger has extensively studied both popular politics, especially in rural Europe, and the dynamics of globalization and industrial production.

As Mueller noted in his remarks, all kinds of politicans have been granted the populist label in recent years — even French president Emmanuel Macron, an unapologetic technocrat, has been called a “populist of the extreme center.”

Nonetheless, Mueller suggested, a useable definition of populism should be focused on a commonality of populist politicians: They always claim “a monopoly for representing the people” in politics.

“Populists are going to say that all other contenders for power are fundamentally illegitimate,” Mueller said, noting that this has “dangerous consequences” for democracies.

In a related vein, Mueller noted, populists consistently claim their own supporters are the “real” citizens of a given country. For instance, he explained, when the Brexit referendum won at the polls in June 2016, the pro-Brexit politician Nigel Farage declared the outcome a “victory for real people” in Britain, despite the narrow 52-48 margin.

“The populist decides who ‘truly’ belongs to the people, and who doesn’t,” said Mueller. “What is distinctive and dangerous about populism is, for shorthand, antipluralism, the tendency always to exclude.”

Mueller also devoted a significant portion of his remarks to his contention that populists, perhaps contrary to common perception, do not just win elections, but can also govern well enough to meet their political goals.

“Not only can populists govern, they can govern as, fundamentally, populists,” Mueller. Populist leaders might preside over deeply divided electorates, but they practice “mass clientalism,” with policies targeted to reward their own supporters.

While Mueller’s remarks focused more on building a robust definition of populism, Berger discussed the relationship between populism and globalization — which is often regarded as a driver of populist sentiment and unrest, by hollowing out wages and jobs in industrialized countries.

As Berger noted, an expanding group of scholars and writers has called for a halt or a slowing to globalization. Indeed, Berger — who is also working on a new book about globalization — noted that it is by no means an inevitable phenomenon. The world experienced what she called its first modern-scale globalization in the late 1800s and early 1900s, only for World War I to bring the process to a sudden halt.

“We’ve been here before,” Berger said. “The first globalization … ended on one day,” she added, referring to Aug. 4, 1914, when Britian declared war on Germany.

“Border walls went up all around the world, and they didn’t come down again until the 1980s,” Berger said. “Capital markets were more integrated in the 1880s than they were in the 1970s.”

Using history as a guide, then, Berger noted, “globalization could end,” especially if economic barriers become a common part of populist policymaking. And in Berger’s view, that could lead to increased economic distress.

“The possibility that protectionism will lead to a recession is a very real one,” Berger said.

However, as Berger said in her remarks, while “slowing the pace” of globalization may help democratic politics, she does not regard a rolling back of global economic connections to be desirable. The larger problem, Berger suggested, is not globalization in itself, but a globalizing economy that has not been accompanied by inclusive politics.

The “first globalization,” Berger said, “was actually a period when democracy expanded and consolidated,” noting that it took place in an era of wider voting rights and other reforms in industrialized nations. “Most of these reforms were won in hard-fought battles [led by] unions, from strikes, and [from] large-scale mobilizations.” In those cases, she added, “elites acted out of necessity and out of concern for social peace ... and in order to build coalitions that would support opening the borders.”

To sustain globalization without producing a further backlash from populist leaders and their followers, then, Berger suggested it was necessary to “build organizations that can bring the voices of those most affected by globalization into policy.”

To be sure, she added, “building such a coalition is going to be very difficult. But it’s what we need to make good on our old promises to make globalization a lever to help everyone. … We need a politics capable of massive initiatives in state and society.”

For his part, Mueller also suggested that mass democracy and greater political participation would not necessarily feed the current populist movement, and indeed might limit the trend.

“It’s not the people who destroy democracies,” Mueller said. “It’s the elites. You might say, ‘Well, sounds like a populist.’ But I remind you: Not all critics of elites are populists.”