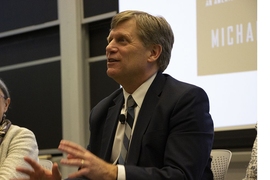 Why have U.S.-Russia relations been rather fraught over much of the last decade? Some might argue that tension is inevitable among international powers. Others have contended that U.S.-backed expansion of the North Atlantic Treaty Organization (NATO) in the last two decades has made Russia feel threatened. But those are hardly the only possible explanations.

In a talk at MIT on Thursday afternoon, Michael McFaul, the former U.S. ambassador to Russia, offered a different intepretation: Much of the change in relations stems from internal Russian politics, he argued. In particular, McFaul said, Russian President Vladimir Putin believes that the U.S. works hard to foster regime changes around the world. The 2011 Arab Spring, followed by large-scale protests in Russia later that year, heightened this feeling on Putin’ part, marking a major inflection point in U.S.-Russia relations.

“He was genuinely worried about this mobilization against him … and that’s when he pivoted hard against us,” McFaul said. “For Putin, this was confirming his theory of U.S. foreign policy.”

Those events occurred as Putin was preparing to run for Russia’s presidency in 2012, to regain a position held at the time by Dmitry Medvedev. And while many Western observers regarded Medvedev as being entirely subordinate to Putin, McFaul contended that with Medvedev as president — even though he was “pretty constrained” in that position — U.S.-Russia relations were more cooperative.

Putin, McFaul said, is more likely to regard the U.S. relations as a zero-sum game, whereas Medvedev was willing to seek out “win-win” deals with the U.S.

“He [Putin] actually has a very different world view than Medvedev,” McFaul said.

McFaul made his remarks before an audience of over 250 people in MIT’s room 26-100. His talk was part of the Starr Forum, a series of public-affairs events hosted by MIT’s Center for International Studies (CIS).

McFaul is a longtime political science professor at Stanford University who in 2009 joined the National Security Council (NSC) in the administration of President Barack Obama, serving as a specialist on Russian policy. He then served as ambassador from late 2011 until early 2014. McFaul has returned to the faculty at Stanford, and in his talk elaborated on ideas discussed in his new book, “From Cold War to Hot Peace: An American Ambassador in Putin’s Russia.”

McFaul was introduced at the event by Elizabeth Wood, an MIT professor who is a historian of modern Russia and co-author of the 2015 book “Roots of Russia’s War in Ukraine.” McFaul was joined onstage for a question-and-answer session by Wood and Carol Saivetz, a senior advisor in MIT’s Security Studies Program, who is also an expert on Russia’s foreign policy.

Saivetz asked McFaul if U.S.-Russia relations would have worsened in absence of the expansion of NATO, which grew to include some Baltic states — Estonia, Lithuania, and Latvia — by 2004.

McFaul contended that relations between the countries would still be highly fraught even without NATO expansion, and drew on his firsthand experience in the government to make the case. McFaul was involved in a large number of direct dicussions among the highest-level officials from the two countries, and during his tenure at the NSC, he recounted, Russian officials simply did not raise the enlargement of NATO as an issue they wanted the U.S. to change course on.

“I can’t recall a single time when NATO expansion came up,” McFaul said.

Over the slightly longer term, McFaul noted, going back to the end of the Cold War and the end of Russia’s communist government in 1991, there have been many different phases in the U.S.-Russia relationship — meaning that the tensions the two countries feel today are not a necessarily permanent condition.

As McFaul noted, the end of the Cold War and the early 1990s was in some ways “a euphoric time. … It felt like we were all moving in the same direction.” By contrast, the Russian cyberattacks that seem to have influenced the 2016 U.S. presidential election campaign, McFaul noted, were “pretty outrageous. That’s a violation of our sovereignty.”

As McFaul also recounted in some detail, he personally was the subject of many ad hominem attacks in the Russian press while serving as ambassador — something that continues even today and that symbolizes the worsened relations between the countries.

In response to a question from Wood, McFaul said he still hopes and expects that the U.S. and Russia can cooperate in a number of ways, despite the current froideur between them.

“I support nongovernmental engagaement … and I think we should continue that,” McFaul said, adding that “science is universal” and lends itself to international collaboration.

Still, McFaul suggested, having Putin as president means there will always be a substantial amount of wariness in U.S.-Russia relations.

“As long as he’s around we’re going to be in this confrontational mode,” McFaul concluded.