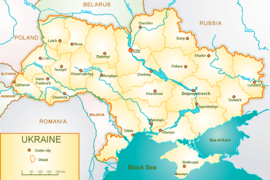 The political conflict between Russia and Ukraine continues to evolve rapidly: On Sunday, citizens in Crimea voted to secede from Ukraine and become part of Russia — a referendum other countries have said they will not recognize.

A group of experts on the region suggested during a public forum at MIT on Friday that the path forward is fraught with hurdles for everyone, not just Western leaders trying to impede Russia’s attempts to annex Crimea.

“There is considerable room for miscalculation all the way around,” said Eugene Fishel, division chief in the Office of Russian and Eurasian Analysis in the U.S. State Department’s Bureau of Intelligence and Research.

While Western leaders are scrambling to find a way to limit Russia’s actions, some of the panelists suggested that Russia could incur serious long-term costs from economic sanctions or reduced access to capital. Meanwhile, other former Soviet republics could become wary of their giant neighbor’s ambitions.

The event — titled “Ukraine: What’s Next?” — was part of the Starr Forum series of public discussions hosted by MIT’s Center for International Studies. Barry Posen, the Ford International Professor of Political Science, and director of MIT’s Security Studies Program, moderated the panel.

Crimea has deep linguistic and social ties to Russia, but is geographically contiguous with Ukraine. Russian President Vladimir Putin has asserted that the Russian-speaking population in Crimea has been put at risk by radical groups in Ukraine; in recent weeks, Russian troops have massed along the Ukrainian border. For its part, Ukraine has little military capacity to wield in its own defense.

Western governments, including that of U.S. President Barack Obama, have weighed imposing various kinds of economic sanctions against Russia and its ruling elite as a means of limiting Russian actions. However, America’s clout may be limited.

“Any [U.S.] sanctions, while useful, will not be nearly as persuasive as European sanctions,” said John Herbst, who served as the U.S. ambassador to Ukraine from 2006 to 2009. After all, Herbst noted, many of Russia’s financial dealings are with European countries, and high-level Russian political leaders and businesspeople have more of their assets in Europe.

But other panelists thought that sanctions could impose a steep long-term cost on Russia.

“I think it’s very costly to Russia in the long run,” said Carol Saivetz, a scholar of Russian policy and a research affiliate at MIT’s Security Studies Program, referring to the threat of economic sanctions and the prospect of capital flight. Recent movements of Russian financial markets, Saivetz added, shows there are “economic costs even from fear of what the crisis might bring.”

Saivetz also suggested that nearby countries might ask themselves, “Is this a sign for the future?” On the one hand, she said, “I don’t think Putin wants to re-create the Soviet Union.” But she added that Russian leaders appear to have a “fear of people power,” and also appear to blame the West “for the so-called colored revolutions” in numerous countries, including Ukraine, in recent years.

The current conflict was triggered, in part, by the events of last November, when public protests broke out in Ukraine after then-president Viktor Yanukovych declined to sign a political agreement with the European Union. Protests continued in 2014, causing Yanukovych to depart office, with new elections scheduled for May.

Whatever the response of Western countries to the events in Crimea, Fishel said, the idea of one European country wresting territory from another should give observers pause in considering the larger geopolitical trajectory of the region.

“I don’t think we … understand the full impact of what Russia is doing to Ukraine right now,” Fishel said.

How should we use our intelligence?