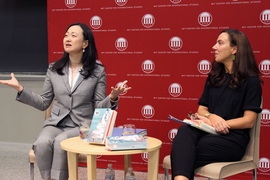 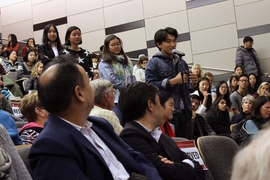 Renowned author Min Jin Lee made a vigorous case for literature as an essential means for understanding complex cultures around the globe, during a public event at MIT on Tuesday.

Lee, a childhood immigrant to the U.S. from Korea whose celebrated 2017 novel “Pachinko” details four generations of a Korean family in times of great upheaval, centered her remarks on the value of writing as a way of teaching people about their counterparts in unfamiliar cultures.

“Perhaps the job of the writer is to ask, ‘Could they be us?’” Lee said, speaking to a large and appreciative audience of over 300 people in MIT’s room 10-250.

The experience of reading fiction, she noted, brings a unique depth and commitment to the process of learning.

“What I’m asking is for you to hang out with me for 16 hours,” Lee said, referring to the amount of time “Pachinko” might take to read. “That’s a pretty big deal.” But one reward, she added, is, “If you could be Korean, only for those 16 hours … then you’ll realize you have the capacity to cross that ocean of unfamiliarity, where the unfamiliar becomes intimately your experience. And that is my goal, absolutely.”

After delivering her remarks, Lee answered questions from the audience as well as from discussant Amy Carleton, a lecturer in MIT’s Comparative Media Studies/Writing program. Lee was introduced at the event by Richard Samuels, the Ford International Professor Professor of Political Science at MIT and director of CIS.

“Pachinko,” Lee’s second novel and best-known work, was named one of the 10 best books of 2017 by The New York Times and a finalist for the National Book Award for fiction. The novel is a sprawling historical narrative that includes sections set in Japanese-occupied Korea during the early 20th century, and in a later period when some of the book’s key characters live in Japan, where Koreans — even those born in Japan — are denied certain rights and live in a distinct minority culture.

Lee’s writerly interest in life as an often-excluded member of society derives to a significant extent from her own family’s experience. In 1976, at age 7, Lee immigrated with her parents to the U.S. from Korea, an experience she referred to throughout the event.

“As I child I remember thinking it was so difficult,” Lee said about her parents, who left a middle-class life in Korea when they came to America and settled in Queens, New York. “They had to deal with poverty, and being mistreated, and so many inequities and indignities, from being a person on the outside.” Over time, she added, “You know what it feels like to watch your parents being insulted.”

For several reasons, Lee added, “My childhood was in many ways complicated and dark.” Still, she thrived as a student, graduated from Yale University and Georgetown University’s law school, and was a lawyer before deciding to become a full-time writer.

In so doing, Lee said, she was fulfilling a longstanding need to describe her own kind of social experience to others.

Responding to an audience question about anything she might have done differently in her life and career, Lee said, “I wish I thought [earlier] that my story mattered. I wouldn’t have taken so long” to write it.

And in response to one student’s comment that he felt “validated” after reading a novel about Koreans marginalized in a larger society, Lee had some sharp criticisms about the lack of representation for people of Asian heritage in our culture.

“Asian-Americans in this country are systematically and routinely erased in the media,” Lee said. “It’s intentional.” As a result, she added, Asian-Americans can easily doubt that their presence and experiences should matter to others.

As Lee made clear, her family’s identity when they lived in Korea was a bit complicated, too. Lee’s grandfather was a Presbyterian minister, a position she said was associated with reformist politics in Korea and the tensions that come with such such a position.

Lee also joked about the personal intricacies of maintaining a belief in both predestination on the one hand, and free will on the other. As she quipped, drawing laughs, “How do those two things work together? The way I think about it also, I can say this at MIT, is: Light is both a particle and a wave.”

Near the end of the question-and-answer session, one student asked Lee if she had thought about turning “Pachinko” into a longer work or continuing series in some form.

“It was an insane amount of work,” Lee replied. “I’m really glad I did it, but I would not continue it.”