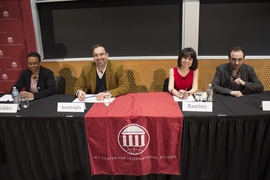 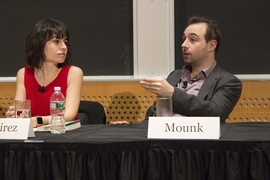 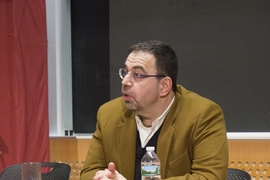 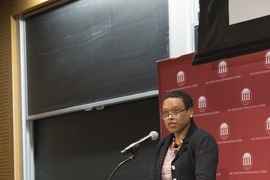 Caption:
Melissa Nobles, the Kenan Sahin Dean of MIT's School of Humanities, Arts, and Social Sciences, and a professor of political science, at the Starr Forum.
Credits:
Image: Laura Kerwin/CIS

Is democracy dying, in the U.S. and around the world? Why or why not? And if so, what can anyone do about it?

Those vexing questions were at the heart of a public forum on the MIT campus Monday night, as scholars and journalists examined the current pressures on democratic systems of rule and suggested some measures to protect them. Held in the Stata Center, the event drew a standing-room only crowd of more than 300.

“Is democracy dying? Well, I don’t know, but it’s certainly having a rough ride,” said Daron Acemoglu, the Elizabeth and James Killian Professor of Economics at MIT and co-author, with James Robinson, of the 2012 book, “Why Nations Fail.”

“We’re seeing attacks on the very norms and rules that we need for liberal democracy to be stable,” said Yascha Mounk, a lecturer on political theory at Harvard University and author of the new book, “The People Versus Democracy: Why Our Freedom Is in Danger and How to Save It.”

And as the panelists noted, the erosion of democracy is international trend, given a recent withering of rights and norms in Hungary, Kenya, Poland, Russia, Turkey, and Venezuela, among other countries — as well as contentious debate about governmental norms and the balance of powers in the U.S.

Journalist Maria Ramirez, who covers U.S. politics for the Univision network, noted that there is now considerable public information about “a lot of details about the Russian operation to discredit democracy in the U.S.,” underscoring that people need to understand the vulnerabilities such incursions exploit.

Acemoglu emphasized, in a central theme of his remarks, that democracy cannot be protected through anything other than ongoing citizen mobilization. Even the checks and balances of the U.S. Constitution, he asserted, are not especially powerful.

“They are not strong, and they weren’t designed to protect democracy,” Acemoglu said. “The only thing that can save democracy is society itself.”

Causes: Inequality, and much more

Melissa Nobles, the Kenan Sahin Dean of MIT’s School of Humanities, Arts, and Social Sciences and a professor of political science, provided introductory remarks, noting that the status of democracy was “a question that is now probably occupying many of our fellow citizens in this country, and indeed around the world.”

Acemoglu suggested multiple factors have created stress on democracy, including a long-term shift toward income inequality, the exploitation of the media by authoritarian leaders around the globe, and a decline of manufacturing and trade unions — not strictly because of the ideological orientation of unions, but also because the capacity for civic engagement they once created is now dwindling.

So while economic inequality and the ensuing resentment against the political status quo is a factor, “It would also be a mistake to think it’s just about economic hardship,” said Acemoglu, who has written extensively on the relationship between political institutions and economic growth.

Conversely, Acemoglu added that despite the political stresses of the moment, “It’s not that easy to take down democracy,” because of the public awareness of rights and liberties that has accumulated over time.

Mounk pointed out that in concert with such trends, there has also been an alarming generational shift in tolerance for authoritarian rule and military rule; in surveys, about two-thirds of people born in the 1930s and 1940s said democracy was absolutely important, but less than one-third of those born in the 1980s and later agreed.

Mounk also noted that even recently political scientists regarded places like Hungary and Poland as democratic success stories, and thought the income levels and multiple transitions of power indicated such places had reached a state of stability. Instead, key rights have been eroded in those countries in recent years.

And while the U.S. has “an astounding record of political stability,” Mounk said, he expressed concerns about transitions of power at the state level, citing actions by the Republican-led state legislature in North Carolina, which moved to strip certain powers from the governor’s office after Democratic Party candidate Roy Cooper won it in November 2016.

For that matter, Mounk said, as much as democracy has built up a strong track record, we “don’t yet know what the dynamics of multiethnic democracy and the reaction against it are” in the long run, given the relatively short time periods in which such democracies have existed.

In response to audience questions, the speakers suggested a few measures that could help the health of democracies around the globe.

“Support journalists is my message,” Ramirez said, calling good reporting “a public service that now is maybe more clear than ever.”

In response to one question, Acemoglu expressed some skepticism that technical tweaks to voting methods (such as preferential or instant-runoff voting) might ensure political stability, although he did assert that a reduction in gerrymandering, limits to the amount of money in U.S. politics, and a smaller political influence in the U.S. civil service would be valuable changes.

Still, Acemoglu reiterated, “I think this is really about social mobilization.”

Mounk, who quipped that the panel consisted of “one semioptimist and two pessimists,” underlined that there are no certainties when it comes to the status of democracy, meaning that citizens who care about it should think about how best to engage with their governments.

“It makes you reflect a little bit about what you can actually do,” Mounk said. For U.S. citizens, he told the audience, “You maintain agency” to take action where rights have already been stripped away from people in many other countries.

“So let’s use it,” Mounk concluded.

The U.S. and Mexico: What’s the way forward?