The U.S. and Mexico: What’s the way forward? 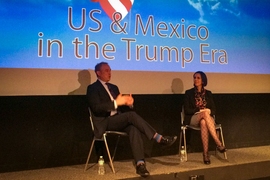 Over the past two years, U.S.-Mexico relations have taken a distinctive turn, largely stemming from the issue agenda President Donald Trump has brought to U.S. politics: Trump campaigned on building a border wall, perhaps to be paid for by Mexico, and says he wants to change the North American Free Trade Agreement (NAFTA), which shapes the countries’ economic relations.

The wall may not reach fruition, and it’s unclear whether NAFTA will be significantly altered, but these political stances have created a “fundamental tectonic shift in the relationship” between the U.S. and Mexico, observed Arturo Sarukhan, former Mexican ambassador to the U.S., at a public forum at MIT on Friday.

To find the last time the U.S. and Mexico were this far out of alignment, Sarukhan suggested, one has to go back to the Cold War, when the U.S. emphasized intervention in Central America as part of its policy of containment, and found itself and Mexico on opposite sides of multiple political struggles.

“Not since this moment in the late 1980s has this relationship been this acrimonious,” Sarukhan told the audience of about 150 in MIT’s Bartos Theater.

And yet, the two countries conduct about $1.4 billion in trade every day, with about 6 million U.S. jobs depending on trade across the border, as Sarukhan noted. So that presents a vital question: How can the two countries move their relationship forward?

From tension, a path forward

For Sarukhan, the answer lies partly in an adage he attributed to Chicago Mayor Rahm Emmanuel: “You shouldn’t let a crisis go to waste.” That is, when pressure for change occurs, it may actually present an opportunity to make needed policy revisions. And as Sarukhan outlined it, that means a more proactive role for Mexico in helping to shape the relationship.

Consider NAFTA. In Sarukhan’s view, new trade negotiations could lead to advances in the pact. Laying out a protrade case, Sarukhan suggested that — first of all — Mexico should insist on including Canada in any new talks, to help update the entire pact.

“There is a real possibility for the three North American countries to update the agreement,” he said. That would allow the negotiations to include issues considered in more recent trade talks, such as the Trans-Pacific Partnership.

Reopening trade discussions might also allow the two countries to update their mutual infrastructure needs. The signing of NAFTA in the 1990s, Sarukhan said, prompted the U.S. and Mexico to build their first cross-border railroad line since the 1910s. The current connections between the countries, he added, are “not up to par with this huge flow of commerce.” He also suggested that a NAFTA update could help the energy industry in all three countries.

Sarukhan noted that NAFTA had indeed created regional job losses, along with overall gains in GDP. “There is no doubt that in a free trade agreement like NAFTA, there have been winners and losers,” he said. In response to an audience question, he noted that an updated agreement could stand to include more support for diplaced workers.

Sarukhan served as Mexico’s ambassador to the U.S. from 2007-2013; he is currently a strategic consultant and a senior fellow at the Brookings Institution in Washington and a distinguished visiting scholar at the University of Southern California Annenberg Public Diplomacy School. Sarukhan’s remarks were followed by an on-stage question-and-answer session he conducted with Lourdes Melgar SM ’88 PhD ’92, the Robert Wilhem Fellow at MIT’s Center for International Studies (CIS) and Mexico’s former deputy secretary of energy for hydrocarbons.

The event on Friday was part of the Starr Forum, a series of panels hosted by MIT’s Center for International Studies (CIS); it was also co-sponsored by the MIT-Mexico Program.

When it comes to a prospective wall, Sarukhan, like the Mexican government, opposes the project, and he voiced his skepticism about a barrier meant to cover 3,000 miles of terrain.

Yet he noted that security was a real concern and offered that along with NAFTA, the event most shaping U.S.-Mexico relations in the last quarter-century was the September 2001 terrorist attack on the U.S.

“It behooves Mexico to work hand in hand with the U.S. to prevent the border from being used to undermine security,” Sarukhan said.

In current public discussion, though, the concept of a wall is more frequently debated in terms of immigration. And yet, as Sarukhan noted, there has been a net flow of immigrants from the U.S. to Mexico over the last several years. In turn, he suggested, this not only means a border wall would be nonessential for U.S. policy goals, but that Mexico should pivot, if necessary, to find room for residents returning from the U.S.

“If Mexico is intelligent, this could be an injection of human capital,” Sarukhan said.

Immigration discussion, he added, should revolve around policies addressing four areas: the overall flow of people across the border, the status of the millions of Mexican immigrants in the U.S., visa requirements, and regulating the flows of temporary workers.

But regarding immigration, as with trade, Sarukhan suggested that Mexico’s best approach would be to help set its joint agenda with the U.S., rather than merely being responsive to U.S. politics. Indeed, he added, for countries such as Mexico that are not military superpowers, this is virtually a guiding principle for survival in a globalized world.

“You sit at the table, or you’re on the menu,” Sarukhan quipped.