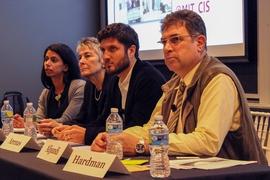 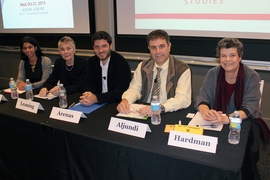 The millions of Syrian refugees displaced by their country’s four-year civil war constitute a major tragedy — and could be a harbinger of even worse problems in the future, a group of scholars and relief workers suggested at an MIT forum on Wednesday.

To cope with such scenarios, the panelists suggested, governments, international organizations and other concerned groups will likely have to take an unblinking look at both the causes of forced migrations and the system of refugee aid that leaves huge numbers of displaced persons holed up in camps and other facilities for years at a time.

“This might well be the tip of the iceberg,” Jennifer Leaning, a professor and director of the FXB Center for Health and Human Rights at the Harvard School of Public Health, said of the situation in Syria. Leaning is also a member of the Inter-University Committee on International Migration, a research group MIT hosts in its Center for International Studies (CIS).

As Leaning noted, the U.S. Committee for Refugees and Immigrants, a nonprofit group, estimates that about 60 million people are displaced around the world right now, a figure higher than the estimated 50 million people left displaced at the conclusion of World War II.

Most Syrians are fleeing the war that has shattered their country. But as Leaning noted, in most places, the world’s displaced persons constitute “a great mixture of highly miserable people … coming for a variety of reasons.” That reality is not easily accommodated by our political and legal systems, however, which are geared toward people seeking political asylum, but not necessarily those displaced by war, economic upheaval, and famine.

Leaning also cited Africa, where she has worked in multiple countries, as a place where increasing forced migration may occur for several reasons.

Indeed, in the view of Anna Hardman — a lecturer in economics at Tufts University and an organizer of MIT’s work on migration, who moderated the event — we may be “uncomfortable choosing a single word” to describe displaced persons because we are trying to sort them into groups, such as either “refugees” or “migrants.” Yet in reality those distinctions may be ill-suited to the many circumstances that force people to flee.

On the ground in Syria and beyond

Those circumstances were well documented at Wednesday’s event, thanks to a pair of presentations from relief workers who have been on the ground in Syria, Iraq, and refugee camps in Europe, where many Syrian refugees have fled.

“It’s just the consequence of desperation and hopelessness,” said Nahuel Arenas, director of humanitarian response at Oxfam America, who has been working on the organization’s response to the Syrian crisis. As he noted, 250,000 people have been killed in Syria, 1 million injured, and half the country’s children no longer attend school.

Most fleeing Syrians have gone to Lebanon, Jordan, Turkey, and Iraq, but those countries have not been able to cope with a migration now numbering millions of people; Iraq is suffering “a humanitarian crisis of its own,” as Arenas noted.

Ali Al Jundi, a Syrian who is now a project officer for Oxfam in Syria, noted that the country’s humanitarian crisis “didn’t happen in one night,” and that drought, agricultural struggles, and an economic downturn had exacerbated the country’s problems even before the civil war started in 2011. Still, as he noted, “the regional conflict has played a particular role in this.” Some of his own relatives have fled, he noted, and some remain displaced.

“The house we want to live in”

Wednesday’s public discussion was part of CIS’s Starr Forum series of events, in which experts discuss pressing issues in international politics and society.

The panelists contended that wealthier countries could be doing more to accommodate the current influx of refugees — and overestimate the extent to which refugees will stay in their borders.

Arenas emphasized that in his experience, refugees almost always want to return home. While presenting a series of photographs from his fieldwork, Arenas showed the audience a picture of two young Syrian refugees in a Serbian camp, constructing a small makeshift object out of sticks.

“We are building the house we want to live in when we go home,” the boys told Arenas, when he asked what they were making.

However, that return might be a long time coming. Serena Parekh, an assistant professor of philosophy at Northeastern University who has researched and written about refugees and human rights, noted that once people are displaced, it is common for them to spend 20 years in camps, with no alternative easily available.

The panelists did express some optimism that wealthier countries may change their attitudes toward refugees in the long run, and Al Jundi emphasized that rebuilding Syria would be an important part of easing the refugee burden other countries are experiencing.

“As Syrians, please give us some hope that we will go back to rebuilding our country,” Al Jundi said.