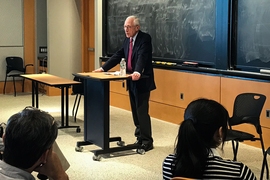 Former U.S. Federal Reserve vice chair Stanley Fischer PhD ’69 emphasized the importance of independence in central banking, while outlining key aspects of his own career as a policy leader, in an MIT lecture on Sept. 30.

“Should a central bank be independent? The answer is yes,” Fischer said, emphasizing the need for policymakers to have maximum flexibility to determine interest rates while grappling with complex economic situations.

Specifically regarding the U.S., Fischer noted, “We are the country with the highest interest rate in the G7, because our economy is in the best shape.” For that reason, he observed, the U.S. has the most leverage to address future economic slowdowns — but would still need to be judicious about it.

“We need to be careful not to let the system degenerate” and head too quickly toward a zero interest rate, Fischer said, which would then likely limit room for the Federal Reserve to spur the economy by lowering rates at a future point when it might be more useful.

Fischer noted that current uncertainty surrounding U.S. economic conditions is considerable. Fears of a recession have lessened in the last two months, he said, but the gains of recent years were not automatically going to continue.

In his remarks, Fischer added that the Fed’s supervisory role in the banking system was vital, and suggested that the 2010 Dodd-Frank financial-sector legislation — which provided additional banking oversight and limited some forms of banking activity — should be fully enforced.

“The regulations have been eased back,” Fischer said. “I think that’s a mistake.”

Fischer was an MIT economics professor from 1976 to 1998 and built an influential career in global monetary policy after leaving the Institute. Besides being vice chair of the U.S. Federal Reserve, from 2014 to 2017, where he worked with then-chair Janet Yellen, Fischer served as governor of the Bank of Israel from 2005 to 2013; first deputy managing director of the International Monetary Fund (IMF) from 1994 to 2001; and chief economist of the World Bank from 1988 to 1990.

Fischer is a native of Zambia, who attended school in multiple countries before working across the world professionally. Still, he told the audience, when people ask him what he considers to be his home, “I say, and I mean it, MIT.”

Fischer’s talk was delivered to a standing-room-only audience of over 125 people in MIT’s lecture hall 1-190. The event was jointly sponsored by MIT’s Undergraduate Economics Association and the Finance and Policy Club of the MIT Sloan School of Management.

Fischer was introduced by James A. Poterba, the Mitsui Professor of Economics at MIT, who called Fischer a “remarkably effective policymaker” and “an incredibly thoughtful and informed source of wisdom about how to think through policy challenges.”

At MIT, Poterba added, Fischer made his mark “not just as a stellar researcher, but as one of the absolute clearest teachers and most successful mentors of graduate students and undergraduates alike.” Poterba added that Fischer was known for the quality of his lectures in MIT’s course 14.02 (Principles of Macroeconomics): “People used to hang from the rafters just to get into Stan’s 14.02 lectures.”

Fischer was also the principal PhD thesis adviser of Ben Bernanke PhD ’79, chair of the U.S. Federal Reserve from 2006 to 2014.

In his remarks, Fischer also talked about gender issues in central banking. He noted that Yellen, whom he called an “excellent economist,” would prepare intensively for four or five days ahead of public Fed meetings. After a while, he suggested to Yellen that her performance would be equally good with less prep time, noting her strong record of the last two years. However, Yellen told him, “I’ve always done that. I’ve always prepared absolutely fully.” In part, Fischer suggested, Yellen thought the attention she might draw for a public misstatement, as the first woman to chair the Fed, would be considerable.

Fischer later raised the subject with Christine Lagarde, head of the International Monetary Fund, who will become next chair of the European Central Bank in November and had a similar perspective. As Fischer recalled, Lagarde told him, “You men simply don’t understand the pressure that is on women in the public sector. We know if we make a mistake, we will be fried. Whereas if a man makes a mistake, no one gets very excited.”

Fischer also talked in some detail about his work as governor of the Bank of Israel — equivalent to the role of Fed chair — where he introduced a monetary policy committee, among other reforms intended to diffuse the governor’s power.

The idea, Fischer said, “was to precisely change the model of the single decision-maker.” By intentionally giving himself less power, he added, jokingly, “I was very idealistic, or stupid, or both.” But he felt the change would align Israel with the practice of allowing more voices into the process of setting rates — where a lot of information must be processed and multiple interpretations of data can arise, making extensive discussion useful.

Expanding the Bank of Israel’s administration required some additional investment, Fischer noted, drawing laughs by observing, “What you can’t say as a central banker is, ‘We don’t have the money.’ [In fact,] you have all the money you can print.”

Fischer said he thought Yellen’s Fed had been “very successful” at its postcrash efforts at normalization, and noted that its leaders, including himself, spent a significant amount of time examing the prospect of interest rates hitting the “Zero Lower Bound,” beyond which they would become negative. Fischer said he was “stunned” there was not more general public discussion about that issue at the moment.

Noting that he had taken on the governorship of the Bank of Israel with a list of 15 policy goals to accomplish, Fischer also offered some career advice to the audience members, most of whom were MIT students: “If you take a job, it’s a good idea to decide what you want to do there.”

Nobel laureate Krugman: ‘Dark age of macroeconomics’ is upon us