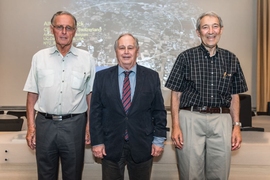 Daniel Z. Freedman, professor emeritus in MIT’s departments of Mathematics and Physics, has been awarded the Special Breakthrough Prize in Fundamental Physics. He shares the $3 million prize with two colleagues, Sergio Ferrara of CERN and Peter van Nieuwenhuizen of Stony Brook University, with whom he developed the theory of supergravity.

The trio is honored for work that combines the principles of supersymmetry, which postulates that all fundamental particles have corresponding, unseen “partner” particles; and Einstein's theory of general relativity, which explains that gravity is the result of the curvature of space-time.

When the theory of supersymmetry was developed in 1973, it solved some key problems in particle physics, such as unifying three forces of nature (electromagnetism, the weak nuclear force, and the strong nuclear force), but it left out a fourth force: gravity. Freedman, Ferrara, and van Nieuwenhuizen addressed this in 1976 with their theory of supergravity, in which the gravitons of general relativity acquire superpartners called gravitinos.

Freedman’s collaboration with Ferrara and van Nieuwenhuizen began late in 1975 at École Normale Supérior in Paris, where he was visiting on a minisabbatical from Stony Brook, where he was a professor. Ferrara had also come to ENS, to work on a different project for a week. The challenge of constructing supergravity was in the air at that time, and Freedman told Ferrara that he was thinking about it. In their discussions, Ferrara suggested that progress could be made via an approach that Freedman had previously used in a related problem involving supersymmetric gauge theories.

“That turned me in the right direction,” Freedman recalls. In short order, he formulated the first step in the construction of supergravity and proved its mathematical consistency. “I returned to Stony Brook convinced that I could quickly find the rest of the theory,” he says. However, “I soon realized that it was harder than I had expected.”

At that point he asked van Nieuwenhuizen to join him on the project. “We worked very hard for several months until the theory came together. That was when our eureka moment occurred,” he says.

“Dan’s work on supergravity has changed how scientists think about physics beyond the standard model, combining principles of supersymmetry and Einstein’s theory of general relativity,” says Michael Sipser, dean of the MIT School of Science and the Donner Professor of Mathematics. “His exemplary research is central to mathematical physics and has given us new pathways to explore in quantum field theory and superstring theory. On behalf of the School of Science, I congratulate Dan and his collaborators for this prestigious award.”

Freedman joined the MIT faculty in 1980, first as professor of applied mathematics and later with a joint appointment in the Center for Theoretical Physics. He regularly taught an advanced graduate course on supersymmetry and supergravity. An unusual feature of the course was that each assigned problem set included suggestions of classical music to accompany students’ work.

“I treasure my 36 years at MIT,” he says, noting that he  worked with “outstanding” graduate students with “great resourcefulness as problem solvers.” Freedman fully retired from MIT in 2016.

He is now a visiting professor at Stanford University and lives in Palo Alto, California, with his wife, Miriam, an attorney specializing in public education law.

The son of small-business people, Freedman was the first in his family to attend college. He became interested in physics during his first year at Wesleyan University, when he enrolled in a special class that taught physics in parallel with the calculus necessary to understand its mathematical laws. It was a pivotal experience. “Learning that the laws of physics can exactly describe phenomena in nature — that totally turned me on,” he says.

Freedman learned about winning the Breakthrough Prize upon returning from a morning boxing class, when his wife told him that a Stanford colleague, who was on the Selection Committee, had been trying to reach him. “When I returned the call, I was overwhelmed with the news,” he says.

Freedman, who holds a BA from Wesleyan and an MS and PhD in physics from the University of Wisconsin, is a former Sloan Fellow and a two-time Guggenheim Fellow. The three collaborators received the Dirac Medal and Prize in 1993, and the Dannie Heineman Prize in Mathematical Physics in 2006. He is a fellow of the American Academy of Arts and Sciences.

Boston Globe reporter Martin Finucane reports that Prof. Emeritus Daniel Freedman has been named a recipient of the Breakthrough Prize in Fundamental Physics for his discovery of supergravity. “The discovery of supergravity was the beginning of including quantum variables in describing the dynamics of spacetime,” explains Edward Witten, chairman of the selection committee.

Prof. Emeritus Daniel Freedman has been awarded the Special Breakthrough Prize in Fundamental Physics for his work devising the theory of supergravity, reports Philip Ball for Scientific American. Freedman notes that the award, “takes the cake—it is the cap of my long career.”