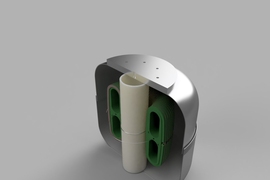 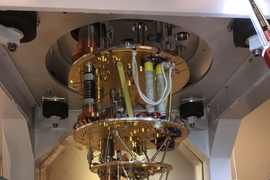 ↓ Download Image
Caption: Researchers suspended the detector in order to reduce vibrations from the ultra-cold refrigerator in which it’s stored.
Credits: Courtesy of the researchers 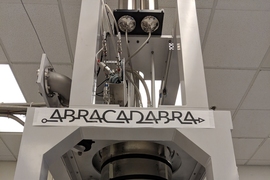 ↓ Download Image
Caption: A heavy shield encases the entire experiment to reduce noise from the surrounding environment, and increase the chance for an axion detection.
Credits: Courtesy of the researchers

Caption:
Illustration of MIT’s new axion detector, in cross-section, designed to simulate an astrophysical magnetar.
Credits:
Courtesy of the researchers

Caption:
Researchers suspended the detector in order to reduce vibrations from the ultra-cold refrigerator in which it’s stored.
Credits:
Courtesy of the researchers

Caption:
A heavy shield encases the entire experiment to reduce noise from the surrounding environment, and increase the chance for an axion detection.
Credits:
Courtesy of the researchers

Physicists from MIT and elsewhere have performed the first run of a new experiment to detect axions — hypothetical particles that are predicted to be among the lightest particles in the universe. If they exist, axions would be virtually invisible, yet inescapable; they could make up nearly 85 percent of the mass of the universe, in the form of dark matter.

Axions are particularly unusual in that they are expected to modify the rules of electricity and magnetism at a minute level. In a paper published today in Physical Review Letters, the MIT-led team reports that in the first month of observations the experiment detected no sign of axions within the mass range of 0.31 to 8.3 nanoelectronvolts. This means that axions within this mass range, which is equivalent to about one-quintillionth the mass of a proton, either don’t exist or they have an even smaller effect on electricity and magnetism than previously thought.

“This is the first time anyone has directly looked at this axion space,” says Lindley Winslow, principal investigator of the experiment and the Jerrold R. Zacharias Career Development Assistant Professor of Physics at MIT. “We’re excited that we can now say, ‘We have a way to look here, and we know how to do better!’”

While they are thought to be everywhere, axions are predicted to be virtually ghost-like, having only tiny interactions with anything else in the universe.

“As dark matter, they shouldn’t affect your everyday life,” Winslow says. “But they’re thought to affect things on a cosmological level, like the expansion of the universe and the formation of galaxies we see in the night sky.”

Because of their interaction with electromagnetism, axions are theorized to have a surprising behavior around magnetars — a type of neutron star that churns up a hugely powerful magnetic field. If axions are present, they can exploit the magnetar’s magnetic field to convert themselves into radio waves, which can be detected with dedicated telescopes on Earth.

In 2016, a trio of MIT theorists drew up a thought experiment for detecting axions, inspired by the magnetar. The experiment was dubbed ABRACADABRA, for the A Broadband/Resonant Approach to Cosmic Axion Detection with an Amplifying B-field Ring Apparatus, and was conceived by Thaler, who is an associate professor of physics and a researcher in the Laboratory for Nuclear Science and the Center for Theoretical Physics, along with Benjamin Safdi, then an MIT Pappalardo Fellow, and former graduate student Yonatan Kahn.

After the group published their theoretical design, Winslow, an experimentalist, set about finding ways to actually build the experiment.

“We wanted to look for a signal of an axion where, if we see it, it’s really the axion,” Winslow says. “That’s what was elegant about this experiment. Technically, if you saw this magnetic field, it could only be the axion, because of the particular geometry they thought of.”

In the sweet spot

It is a challenging experiment because the expected signal is less than 20 atto-Tesla. For reference, the Earth’s magnetic field is 30 micro-Tesla and human brain waves are 1 pico-Tesla. In building the experiment, Winslow and her colleagues had to contend with two main design challenges, the first of which involved the refrigerator used to keep the entire experiment at ultracold temperatures. The refrigerator included a system of mechanical pumps whose activity could generate very slight vibrations that Winslow worried could mask an axion signal.

The second challenge had to do with noise in the environment, such as from nearby radio stations, electronics throughout the building turning on and off, and even LED lights on the computers and electronics, all of which could generate competing magnetic fields.

The team solved the first problem by hanging the entire contraption, using a thread as thin as dental floss. The second problem was solved by a combination of cold superconducting shielding and warm shielding around the outside of the experiment.

“We could then finally take data, and there was a sweet region in which we were above the vibrations of the fridge, and below the environmental noise probably coming from our neighbors, in which we could do the experiment.”

“If you take the data and run it through an audio program, you can hear the sounds that the fridge makes,” Winslow says. “We also see other noise going on and off, from someone next door doing something, and then that noise goes away. And when we look at this sweet spot, it holds together, we understand how the detector works, and it becomes quiet enough to hear the axions.”

In 2018, the team carried out ABRACADABRA’s first run, continuously sampling between July and August. After analyzing the data from this period, they found no evidence of axions within the mass range of 0.31 to 8.3 nanoelectronvolts that change electricity and magnetism by more than one part in 10 billion.

The experiment is designed to detect axions of even smaller masses, down to about 1 femtoelectronvolts, as well as axions as large as 1 microelectronvolts.

The team will continue running the current experiment, which is about the size of a basketball, to look for even smaller and weaker axions. Meanwhile, Winslow is in the process of figuring out how to scale the experiment up, to the size of a compact car — dimensions that could enable detection of even weaker axions.

“There is a real possibility of a big discovery in the next stages of the experiment,” Winslow says. “What motivates us is the possibility of seeing something which would change the field. It’s high-risk, high-reward physics.”

This research was funded, in part, by the National Science Foundation, the Department of Energy, and the Simons Foundation.

The study’s other co-authors include Reyco Henning at the University of North Carolina at Chapel Hill  and Triangle Universities Nuclear Laboratory, Joshua Foster and Ben Safdi at the University of Michigan, Yonatan Kahn at the Kavli Institute for Cosmological Physics and the University of Illinois at Urbana-Champaign, and Nick Rodd at the University of California at Berkeley and Lawrence Berkeley National Lab. Technical support was provided by MIT’s Bates Research and Engineering Center, and the research was funded, in part, by the National Science Foundation, the Department of Energy, and the Simons Foundation.