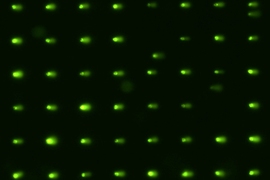 ↓ Download Image
Caption: MIT chemists have devised a way to observe the transition state of the chemical reaction that occurs when vinyl cyanide is broken apart by an ultraviolet laser.
Credits: Image: Christine Daniloff, MIT

It’s estimated that there are approximately 80,000 industrial chemicals currently in use, in products such as clothing, cleaning solutions, carpets, and furniture. For the vast majority of these chemicals, scientists have little or no information about their potential to cause cancer.

The detection of DNA damage in cells can predict whether cancer will develop, but tests for this kind of damage have limited sensitivity. A team of MIT biological engineers has now come up with a new screening method that they believe could make such testing much faster, easier, and more accurate.

“My hope is that they use it to identify potential carcinogens and we get them out of our environment, and prevent them from being produced in massive quantities,” says Bevin Engelward, a professor of biological engineering at MIT and the senior author of the study. “It can take decades between the time you’re exposed to a carcinogen and the time you get cancer, so we really need predictive tests. We need to prevent cancer in the first place.”

Engelward’s lab is now working on further validating the test, which makes use of human liver-like cells that metabolize chemicals very similarly to real human liver cells and produce a distinctive signal when DNA damage occurs.

Currently, tests for the cancer-causing potential of chemicals involve exposing mice to the chemical and then waiting to see whether they develop cancer, which takes about two years.

Engelward has spent much of her career developing ways to detect DNA damage in cells, which can eventually lead to cancer. One of these devices, the CometChip, reveals DNA damage by placing the DNA in an array of microwells on a slab of polymer gel and then exposing it to an electric field. DNA strands that have been broken travel farther, producing a comet-shaped tail.

While the CometChip is good at detecting breaks in DNA, as well as DNA damage that is readily converted into breaks, it can’t pick up another type of damage known as a bulky lesion. These lesions form when chemicals stick to a strand of DNA and distort the double helix structure, interfering with gene expression and cell division. Chemicals that cause this kind of damage include aflatoxin, which is produced by fungi and can contaminate peanuts and other crops, and benzo[a]pyrene, which can form when food is cooked at high temperatures.

Engelward and her students decided to try to adapt the CometChip so that it could pick up this type of DNA damage. To do that, they took advantage of cells’ DNA repair pathways to generate strand breaks. Typically, when a cell discovers a bulky lesion, it will try to repair it by cutting out the lesion and then replacing it with a new piece of DNA.

“If there’s something glommed onto the DNA, you have to rip out that stretch of DNA and then replace it with fresh DNA. In that ripping process, you’re creating a strand break,” Engelward says.

To capture those broken strands, the researchers treated cells with two compounds that prevent them from synthesizing new DNA. This halts the repair process and generates unrepaired single-stranded DNA that the Comet test can detect.

The researchers also wanted to make sure that their test, which is called HepaCometChip, would detect chemicals that only become hazardous after being modified in the liver through a process called bioactivation.

“A lot of chemicals actually are inert until they get metabolized by the liver,” Ngo says. “In the liver you have a lot of metabolizing enzymes, which modify the chemicals so that they become more easily excreted by the body. But this process sometimes produces intermediates that can turn out to be more toxic than the original chemical.”

To detect those chemicals, the researchers had to perform their test in liver cells. Human liver cells are notoriously difficult to grow outside the body, but the MIT team was able to incorporate a type of liver-like cell called HepaRG, developed by a company in France, into the new test. These cells produce many of the same metabolic enzymes found in normal human liver cells, and like human liver cells, they can generate potentially harmful intermediates that create bulky lesions.

To test their new system, the researchers first exposed the liver-like cells to UV light, which is known to produce bulky lesions. After verifying that they could detect such lesions, they tested the system with nine chemicals, seven of which are known to lead to single-stranded DNA breaks or bulky lesions, and found that the test could accurately detect all of them.

“Our new method enhances the sensitivity, because it should be able to detect any damage a normal Comet test would detect, and also adds on the layer of the bulky lesions,” Ngo says.

The whole process takes between two days and a week, offering a significantly faster turnaround than studies in mice.

The researchers are now working on further validating the test by comparing its performance with historical data from mouse carcinogenicity studies, with funding from the National Institutes of Health.

They are also working with Integrated Laboratory Systems, a company that performs toxicology testing, to potentially commercialize the technology. Engelward says the HepaCometChip could be useful not only for manufacturers of new chemical products, but also for drug companies, which are required to test new drugs for cancer-causing potential. The new test could offer a much easier and faster way to perform those screens.

“Once it’s validated, we hope it will become a recommended test by the FDA,” she says.