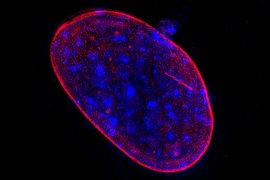 ↓ Download Image
Caption: Aneuploid cells, such as this one, have too few or too many chromosomes. A new study has revealed that highly aneuploid prostate tumors carry a higher risk of lethality.
Credits: Credit: Wendy Wang and Eliza Vasile

Caption:
Aneuploid cells, such as this one, have too few or too many chromosomes. A new study has revealed that highly aneuploid prostate tumors carry a higher risk of lethality.
Credits:
Credit: Wendy Wang and Eliza Vasile

Most human cells have 23 pairs of chromosomes. Any deviation from this number can be fatal for cells, and several genetic disorders, such as Down syndrome, are caused by abnormal numbers of chromosomes.

For decades, biologists have also known that cancer cells often have too few or too many copies of some chromosomes, a state known as aneuploidy. In a new study of prostate cancer, researchers have found that higher levels of aneuploidy lead to much greater lethality risk among patients.

The findings suggest a possible way to more accurately predict patients’ prognosis, and could be used to alert doctors which patients might need to be treated more aggressively, says Angelika Amon, the Kathleen and Curtis Marble Professor in Cancer Research in the Department of Biology and a member of the Koch Institute for Integrative Cancer Research.

“To me, the exciting opportunity here is the ability to inform treatment, because prostate cancer is such a prevalent cancer,” says Amon, who co-led this study with Lorelei Mucci, an associate professor of epidemiology at the Harvard T.H. Chan School of Public Health.

Konrad Stopsack, a research associate at Memorial Sloan Kettering Cancer Center, is the lead author of the paper, which appears in the Proceedings of the National Academy of Sciences the week of May 13. Charles Whittaker, a Koch Institute research scientist; Travis Gerke, a member of the Moffitt Cancer Center; Massimo Loda, chair of pathology and laboratory medicine at New York Presbyterian/Weill Cornell Medicine; and Philip Kantoff, chair of medicine at Memorial Sloan Kettering; are also authors of the study.

Most cancers also show very high prevalence of aneuploidy, which poses a paradox: Why does aneuploidy impair normal cells’ ability to survive, while aneuploid tumor cells are able to grow uncontrollably? There is evidence that aneuploidy makes cancer cells more aggressive, but it has been difficult to definitively demonstrate that link because in most types of cancer nearly all tumors are aneuploid, making it difficult to perform comparisons.

Prostate cancer is an ideal model to explore the link between aneuploidy and cancer aggressiveness, Amon says, because, unlike most other solid tumors, many prostate cancers (25 percent) are not aneuploid or have only a few altered chromosomes. This allows researchers to more easily assess the impact of aneuploidy on cancer progression.

What made the study possible was a collection of prostate tumor samples from the Health Professionals Follow-up Study and Physicians’ Health Study, run by the Harvard T.H. Chan School of Public Health over the course of more than 30 years. The researchers had genetic sequencing information for these samples, as well as data on whether and when their prostate cancer had spread to other organs and whether they had died from the disease.

Led by Stopsack, the researchers came up with a way to calculate the degree of aneuploidy of each sample, by comparing the genetic sequences of those samples with aneuploidy data from prostate genomes in The Cancer Genome Atlas. They could then correlate aneuploidy with patient outcomes, and they found that patients with a higher degree of aneuploidy were five times more likely to die from the disease. This was true even after accounting for differences in Gleason score, a measure of how much the patient’s cells resemble cancer cells or normal cells under a microscope, which is currently used by doctors to determine severity of disease.

The findings suggest that measuring aneuploidy could offer additional information for doctors who are deciding how to treat patients with prostate cancer, Amon says.

“Prostate cancer is terribly overdiagnosed and terribly overtreated,” she says. “So many people have radical prostatectomies, which has significant impact on people’s lives. On the other hand, thousands of men die from prostate cancer every year. Assessing aneuploidy could be an additional way of helping to inform risk stratification and treatment, especially among people who have tumors with high Gleason scores and are therefore at higher risk of dying from their cancer.”

“When you’re looking for prognostic factors, you want to find something that goes beyond known factors like Gleason score and PSA [prostate-specific antigen],” says Bruce Trock, a professor of urology at Johns Hopkins School of Medicine, who was not involved in the research. “If this kind of test could be done right after a prostatectomy, it could give physicians information to help them decide what might be the best treatment course.”

Amon is now working with researchers from the Harvard T.H. Chan School of Public Health to explore whether aneuploidy can be reliably measured from small biopsy samples.

The researchers found that the chromosomes that are most commonly aneuploid in prostate tumors are chromosomes 7 and 8. They are now trying to identify specific genes located on those chromosomes that might help cancer cells to survive and spread, and they are also studying why some prostate cancers have higher levels of aneuploidy than others.

“This research highlights the strengths of interdisciplinary, team science approaches to tackle outstanding questions in prostate cancer,” Mucci says. “We plan to translate these findings clinically in prostate biopsy specimens and experimentally to understand why aneuploidy occurs in prostate tumors.”

“A very small proportion of thyroid tumors is highly aggressive and lethal, and I’m starting to wonder whether those are the ones that have some aneuploidy,” she says.

MIT researchers have found that tracking specific changes in the number of chromosomes inside prostate cancer cells might help determine whether tumors should be treated, reports Robert Preidt for HealthDay News. “Besides giving new insights into how prostate tumors form and spread, the chromosomal data might someday be employed clinically to inform risk stratification and treatment decisions,” Preidt explains.