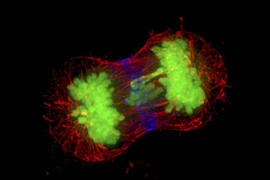 ↓ Download Image
Caption: A deconvolved wide-field fluorescence microscope image of human HeLa cancer cells, during late anaphase/early telophase, showing a lagging chromosome. If this fails to get into a daughter cell, it may lead to aneuploidy.

Caption:
A deconvolved wide-field fluorescence microscope image of human HeLa cancer cells, during late anaphase/early telophase, showing a lagging chromosome. If this fails to get into a daughter cell, it may lead to aneuploidy.

Aneuploidy is a condition in which cells contain an abnormal number of chromosomes, and is known to be the cause of many types of cancer and genetic disorders, including Down Syndrome. The condition is also the leading cause of miscarriage.

Disorders caused by aneuploidy are unusual in that the severity of their effects often varies widely from one individual to another.

For example, nearly 90 percent of fetuses with three copies of chromosome 21, the cause of Down Syndrome, will miscarry before birth. In other cases, people with the condition will live until they are over 60 years old.

Researchers have previously believed that this variation is the result of differences in the genetic makeup of those individuals with the condition.

But in a paper published today in the journal Cell, researchers at the Koch Institute for Integrative Cancer Research at MIT reveal that aneuploidy alone can cause this significant variability in traits, in otherwise genetically identical cells.

The finding could have significant implications for cancer treatment, since it could explain why genetically identical cancer cells may respond differently to the same therapy.

Aneuploidy originates during cell division, when the chromosomes do not separate properly or are not equally partitioned between the two daughter cells. This leads the cells, which in humans would normally have 46 chromosomes, to develop with either too many or too few chromosomes.

To study the effects of the condition, the researchers induced either chromosome loss or gain in genetically identical baker’s yeast cells. They chose baker’s yeast because the cells behave in a very similar way to human cells, according to Angelika Amon, the Kathleen and Curtis Marble Professor of Cancer Research and a member of the Koch Institute.

The induced changes had an immediate impact on the cells.

“We induced aneuploidy, and we found that the response was very variable from cell to cell,” Amon says. “Some cells slowed down their cycle completely, so that they could no longer divide, whereas others kept dividing quite normally and only experienced a small effect.”

The researchers carried out a systematic analysis, investigating the effect on the cells of gaining or losing a variety of different chromosomes. They found that in each case, even though individual cells had gained or lost the same chromosome, they behaved very differently from each other.

“So that really suggested that every single chromosome gained or lost had this effect, in that the responses (in each case) were quite variable,” Amon says.

The researchers also investigated the impact of aneuploidy on other biological pathways, such as transcription, the first stage of gene expression in which a segment of DNA is copied into RNA.

They found that here too, the effects of aneuploidy were varied across otherwise identical cells.

The cells’ response to environmental changes also varied considerably, suggesting that aneuploidy has an impact on the robustness of many, if not all, biological processes.

To ensure the response is not an effect that is unique to baker’s yeast cells, the researchers then studied the impact of aneuploidy on mice, and found the same levels of variability, Amon says.

“This suggests that the aneuploidy state itself could create variability, and that could provide an additional explanation of why diseases that are caused by aneuploidy are so variable,” Amon says.

Tumors, for example, are known to contain different populations of cells, some of which are quite different to each other in their genetic makeup. These genetic differences have often been blamed when chemotherapy or other treatments have been unsuccessful, as it was believed that the therapy may not have targeted all of the cells within the tumor.

“Unfortunately our paper suggests that tumors don’t even need to be heterogeneous genetically, the very fact that they have aneuploidy could lead to very variable outcomes, and that represents a significant challenge for cancer therapy,” Amon says.

Understanding the consequences of aneuploidy on cellular phenotypes is a fundamental question that has important implications for the treatment of several diseases, such as cancer and Down Syndrome, according to Giulia Rancati of the Institute of Medical Biology at the Agency for Science, Technology and Research (A*STAR) in Singapore, who was not involved in the research.

“This new exciting work adds an additional layer of understanding of how aneuploidy causes phenotypic variation, by revealing an unexpectedly high cell-to-cell variability between cells harboring the same aneuploidy karyotype,” Rancati says. “It would be interesting to test if this property of the aneuploid state might positively contribute to the evolution of cancer cells, which are known to develop drug resistance at high frequency.”

The researchers are now hoping to carry out further studies to investigate the origins of the variability, Amon says.

The results suggest that subtle changes in gene dosage across many genes, caused by the change in chromosome numbers, can promote alternate behaviors.