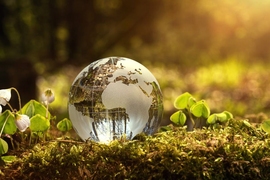 ↓ Download Image
Caption: While all global climate models show an overall increase in surface temperatures over the coming decades, when it comes down to regional effects on temperature and rainfall there are areas of significant uncertainty.

Caption:
While all global climate models show an overall increase in surface temperatures over the coming decades, when it comes down to regional effects on temperature and rainfall there are areas of significant uncertainty.

There is little doubt that the Earth’s rapidly changing climate will have a significant impact on agriculture around the world. Yields are likely to increase in some places and decrease in others, and some regions may have to switch to different crop varieties and farming practices. But many important aspects of just how and where those impacts will occur remain unknown.

All global climate models show an overall increase in surface temperatures over the coming decades, and essentially all regional scale models show a risk of high agricultural losses as a result. But projecting future regional fluctuations of rainfall and the response of specific crop systems to climate change is more challenging. At the same time, it’s clear that changes in agricultural practices and in the tastes, needs, and demands of the planet’s growing population can, in turn, have potentially dramatic effects on the climate itself. Important details of those potential impacts also require much further study.

To clarify some of what is known about these complex interactions, and what areas have a pressing need for further research, a two-day MIT workshop this week brought together a group of specialists from around the world to explore the interactions of food, water, and agriculture in a changing climate.

There were some clear messages that, while perhaps not widely known, are uncontroversial in the research community: Specific practices by individuals, including both farmers and consumers, can make a big difference, whether it’s deciding what kind of fertilizers to use on a crop, which seeds to plant, how often to till the soil, or other changes in agronomic practices — or simply making different choices of what animal and plant products to include in a nutritious diet. All of these decisions could greatly decrease — or increase — the world’s greenhouse gas emissions.

Nearly a quarter of all anthropogenic greenhouse gas emissions come from agriculture, including land-use change, said John Reilly, co-director of MIT’s Joint Program on the Science and Policy of Global Change and a senior lecturer at MIT’s Sloan School of Management. So changes in that sector can have a big impact.

The workshop, organized by the Abdul Latif Jameel World Water and Food Security Lab (J-WAFS) at MIT, was titled, “Climate change, agriculture, water, and food security: What we know and don’t know.” Reilly, speaking at the workshop’s opening session, said “there’s a lot of work still to do” in untangling the complex web of interactions in this area. “We should be cautious in thinking about what we know. It’s still a young field.”

“A lot of conventional wisdom is wrong,” said David Lobell, deputy director of the Center on Food Security and the Environment at Stanford University. For example, he said that studies of climate change and agriculture often focus on projected rainfall changes, but actually it is the temperature increase itself that has the greatest effect on crops. And while improvements in seeds and cultivation methods are continuing to increase yields, that progress has slowed down.

What’s more, while farmers and economic analysts tend to focus on the need to increase crop yield, there will need to be continuing attention to the nutritional value of crops, to significantly increase protein, vitamins, or micronutrients.

While climate influences crops, the growing methods can also affect the climate. For example, irrigation of crops ends up putting more moisture in the air, which can cause those areas to warm up less than they would otherwise, Lobell said.

What people choose to eat can also have a big impact. Pete Smith, professor of soils and global change at the University of Aberdeen, in Scotland, said that while most efforts to curb global warming focus on the supply side, managing the demand side “is one of the big dials that we can control” to affect climate outcomes.

In the area of food and agriculture, “some of the demand-side measures have the potential for impacts that exceed all the supply-side measures put together,” Smith said. For example, reducing the roughly one-third of all food that gets wasted globally — whether thrown away or spoiled — could significantly reduce the needs for land, labor, water, and energy to produce that food.

Smith also said that changing people’s dietary choices even a bit could put a big dent in greenhouse gas emissions — and potentially make people healthier at the same time. Decreasing red meat consumption, for example, could reduce overall emissions from agriculture, he said.

But much less drastic measures could also make a difference, he said: “It doesn’t require binary choices — people don’t have to become vegetarian or vegan, they can just eat less meat.” Just reducing consumption of red meat, the most greenhouse-gas intensive food, could reduce emissions by almost a third, according to Smith. “A decrease in meat consumption could have an absolutely enormous impact,” he said — and be much better for people’s health. “Diets that give us substantial health benefits also give us a healthier environment, and are more sustainable,” he added.

Maria Zuber, MIT’s vice president for research, told the workshop that “I can’t underscore enough how important the work you’re doing here is. … These are the sorts of things that MIT likes to do — to solve problems of society that require a deep knowledge of science.”

J-WAFS awards $1.4 million in third round of seed grant funding