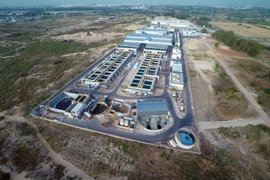 ↓ Download Image
Caption: This desalination plant in Israel, called Sorek, is currently the world's largest, producing 625,000 cubic meters of fresh water per day. Boris Liberman, chief technology officer of IDE Technologies, the company that built this and several other huge desalination plants in Israel and California, was among the speakers at MIT's Low Carbon Desalination Workshop, which explored the potential for reducing the carbon footprint of such facilities. 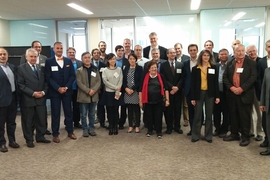 Caption:
This desalination plant in Israel, called Sorek, is currently the world's largest, producing 625,000 cubic meters of fresh water per day. Boris Liberman, chief technology officer of IDE Technologies, the company that built this and several other huge desalination plants in Israel and California, was among the speakers at MIT's Low Carbon Desalination Workshop, which explored the potential for reducing the carbon footprint of such facilities.
Credits:
Photo courtesy IDE Technologies

In one of the most remarkable turnarounds ever achieved in the face of a natural resource crisis, Israel has overcome a looming fresh water shortage in less than a decade. The country now has such a large water surplus that it can sell significant amounts to its parched neighboring countries. The reversal was made possible by the construction of the world’s largest desalination plants, which convert seawater from the Mediterranean into potable water for both domestic use and agriculture.

But while that new glut of water can provide a valuable example for nations and regions around the world that are facing water shortages, it also has an environmental price: Desalination plants are intensive users of energy, the production of which typically requires burning fossil fuels in large power plants.

To address that issue and work toward a roadmap for future research and demonstrations, some of the world’s leading specialists in the technology, economics, and regulatory issues surrounding desalination gathered at MIT this week. They discussed how to get the salt out of seawater or brackish aquifers at all scales, from small, local installations to the kinds of megaprojects that transformed Israel’s situation, while minimizing or eliminating the associated greenhouse gas emissions.

The two-day workshop, organized by MIT’s Abdul Latif Jameel World Water and Food Security Lab (J-WAFS) and the Global Clean Water Desalination Alliance (GCWDA), brought together experts from 11 nations to discuss the issues and frame a report to be delivered next month at the 22nd session of the Conference of the Parties to the United Nations Framework Convention on Climate Change, or, COP22, in Marrakesh, Morocco. The aim is to map out the areas where research and development, and demonstration projects are most needed and could yield the greatest benefits.

“What you are doing is so crucially important,” said Maria Zuber, MIT’s vice president for research, to the participants at the conclusion of the workshop. She pointed out that while the world population is “going up, up, up, the amount of fresh water is basically a fixed asset.” And yet, there is “an incredible resource in the ocean, all the water you could want, yet it’s not suitable for human needs.” That’s why it is so essential, she said, to find a way to provide “access to clean water that doesn’t impact the environment in a negative way with its carbon footprint.”

“We need breakthoughs on this,” Zuber said, “and thanks to the efforts of all of you, I think we’re going to have it.”

Many potential solutions to that problem — as well as the challenges that need further research — were discussed at length by the participants. Coupling desalination facilities with carbon-free or low-carbon power sources such as solar, wind, or nuclear power plants could make it possible to gain the benefits of clean water without the climate impact. But some of these renewable energy sources do not deliver power continuously, and some types of desalination technology encounter difficulties when their operation is not constant.

For example, variations in the operation of the plants can lead to increased fouling of the membranes that separate the salt from the water. Wind and solar installations produce variable power, so to avoid the ramping up and down of the desalination plants, these power sources might need to be coupled with storage systems, raising the cost. And nuclear plants tend to be larger than needed for desalination, so such facilities might have to be coupled with power production for other uses.

Boris Liberman, vice president and chief technology officer of IDE Technologies, the Israel-based company responsible for the design and construction of that county’s giant new seawater desalination plants, including the largest such plant in the world, said that those plants have now demonstrated that with proper design and operation it is possible to operate efficiently even with power supplies that ebb and flow. The key, he said, is to maintain constant pressure inside the system while allowing the flow rate and freshwater output to rise and fall. The company’s largest plant, called Sorek, which produces 150 million cubic meters of water per year, “has worked for two years with no fouling," he said.

Jacopo Buongiorno, MIT’s TEPCO Professor of Nuclear Science and Engineering, described a concept for making floating offshore desalination plants, which could be coupled to floating offshore nuclear plants that he and his students have been designing. The paired facilities would take advantage of the inherent advantages of building many identical units that could be assembled in shipyards and towed to their eventual point of use. This approach allows for controlled construction in facilities that could develop expertise in building those plants rather than relying on local construction crews and materials at each end-use location.

Creating desalination plants on a floating platform, he said, would also eliminate many of the problems associated with the long and complex intake tubes that bring seawater to the plant and discharge brine back into the sea. These intake and outflow systems, in many locations, can now cost as much as the desalination plants themselves. “Offshore nuclear with water desalination offers a new and flexible deployment and operation paradigm for zero-carbon cogeneration of power and fresh water,” Buongiorno said.

But there are many other potential pairings of power sources with desalination facilities, many workshop participants said. For example, geothermal energy could potentially provide both electricity and heat — the two big requirements for desalination — and could be suitable for many different kinds of locations, since geothermal heat is available anywhere if drills can reach deep enough. Other possibilities include the use of wave or tidal power, or of advanced solar technologies such as thermal plants that store the sun’s heat in vats of molten salt. These plants can then be used to deliver that heat when it’s needed, even during the night, providing a way to get constant output from solar power.

Lienhard and others pointed out that desalination could, in fact, be thought of as a kind of storage technology in itself. That is, in situations where there is a mismatch between the times when renewable power sources are available and when the power is actually needed, the excess power could be used to make and store fresh water, which could then be delivered whenever needed without having to draw power for desalination during periods of peak loads on the grid. “Water is cheap to store,” he says, compared to electricity, which requires expensive battery or pumped-hydro storage systems.

A final report from the workshop, based on the input from all of the participants, will be produced in the next few weeks, aiming to outline “what are the priorities for research funding, what are the barriers, and how to prioritize the work,” Lienhard said.