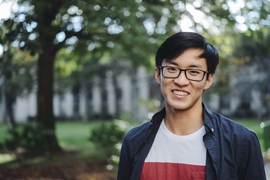 ↓ Download Image
Caption: “I am fascinated by how people work, why we do what we do, and why we think what we think,” says senior and Marshall Scholar Liang Zhou. 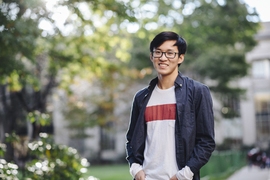 ↓ Download Image
Caption: “I am fascinated by how people work, why we do what we do, and why we think what we think,” says senior and Marshall Scholar Liang Zhou.

Caption:
“I am fascinated by how people work, why we do what we do, and why we think what we think,” says senior and Marshall Scholar Liang Zhou.

Halfway through his sophomore year, Liang Zhou made a decision that changed the course of his academic career. The electrical engineering and computer science major enrolled in three classes in brain and cognitive sciences, an area he hadn’t studied before. Though he can’t pinpoint his exact reasoning for doing so at the time — perhaps it was intuition —  he has no regrets.

As he begins his last semester at MIT, Zhou is “really, really glad” he made that choice, and is now completing a double major in electrical engineering and computer science and brain and cognitive sciences.

“I’m interested in studying computer science because of its wealth of applications in other domains,” Zhou says. Take neuroscience: “It’s about the brain and it’s about how we as people fundamentally think about things, so understanding others. It’s a way to connect both the very hard science and rigor to something that’s very relevant to everybody.”

As he prepares to pursue a master’s degree in computational neuroscience at the University College London as a Marshall Scholar, the native of Riverside, California, can clearly articulate his research motivation: “I am fascinated by how people work, why we do what we do, and why we think what we think.”

For Zhou, his intense introduction to neuroscience marked “a paradigm shift.” While he began to study the brain in his classes, Zhou also opted to pursue research in a field where he could apply his coding skills. He found a great fit: the Computational Cognitive Science Laboratory, led by Professor Josh Tenenbaum. The lab group uses a combination of computer modeling and behavioral experiments to understand the basis of human learning.

Under the mentorship of Tobias Gerstenberg, a postdoc in the Tenenbaum lab, Zhou  has worked on projects that investigate how people perceive their environments.

Zhou began with a research project that asked subjects to assess the structural stability of a brick tower. Subjects were asked what would happen to the brick tower if certain blocks were removed, and to assess how important single bricks were for the stability of the overall structure. “We calculated responsibilities for different brick configurations and compared them to people’s assessments, which gave us a better notion for people’s judgements about stability,” Zhou says.

What fascinated Zhou most was the disconnect between the subjects’ judgements and the ground truth. “What people think will happen is usually not what happens in terms of those bricks, so we created a model … which was better in line with people’s predictions and not the ground truth.” That model, called the hypothetical simulation model, was detailed in a conference paper for the 39th annual meeting of the Cognitive Science Society, which was held this past July.

That model and the disconnect it details led Zhou to his current research interest: understanding intuitive physics.

“When you take an apple and you drop it, you don’t think F=ma, therefore it’s going to drop with one Newton and it’s going to hit the ground at this time,” Zhou says. “You think, ‘Oh, it’s an apple and it’s going to fall.’ We have an intuition for how the world works, and we have a mental notion of how one physical event can cause others to happen … but we never explicitly learn this material, and we learn it so readily and so easily.”

Zhou wants to investigate how that intuition arises from neurons, and that begins with the dedicated study he plans to do in graduate school: “Computational neuroscience is a lot about modeling the actual neurons themselves. … In the future, I want to do research in cognitive neuroscience. I think it’s very important to have a very solid statistical and mathematical background, and I hope that studying computational neuroscience will give me that.”

In the future, Zhou sees himself continuing his research and sharing its applications.

“There’s no better way to actually contribute to this field of research than to be in academia and to do research, but I also realize that research isn’t particularly useful if it’s not applied to something,” Zhou says. “With this line of research, there are so many applications in society. With a better understanding of how we think … we could have a better sense for what it means to understand somebody.”

Zhou also cites recent research in behavioral economics that highlights the surprising strength of irrational thinking. “We assume people are rational, and we assume people are logical, but they are really not. And [knowing] that helps you create better models of how people work.”

He envisions these types of models informing future education and public policy. “This research isn’t going anywhere if we don’t actually put it somewhere,” Zhou says. To share his vision, Zhou also hopes to become an active voice in science policy and public science advocacy. However, he points out that’s far in the future: “For the moment I just want to do a PhD for more in-depth and hands-on research experience, but I’d love to get involved in making this have tangible effects on the world in the future if there’s a path there for me.”

During his time at MIT, Zhou has also interned in software engineering at NextJump, Lucid Software, and Apple. Zhou served at conference chair for the 2017 EECScon, a U.S. undergraduate-led research conference. In addition to his research in the Tenenbaum group, he also performs computational neuroscience research at Harvard University, and has undertaken research projects in the MIT Media Lab and the Computer Science and Artificial Intelligence Laboratory through the Undergraduate Research Opportunities Program (UROP).

Zhou is an active member of the MIT Asian Dance Team, where he has served on the executive board for two years. He has also choreographed hip-hop pieces for MIT DanceTroupe. Additionally, Zhou served as teaching assistant for both undergraduate- and graduate-level machine learning courses for MIT students. This past year, Zhou was awarded the Hans Lukas Teuber Award for Outstanding Academics.