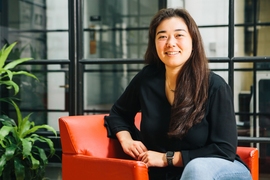 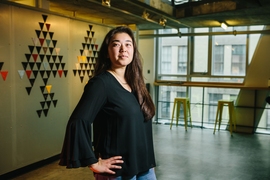 Sports were the most common pastimes in the small beachside community of Arroyo Grande, California, where Kathleen Schwind grew up. She herself settled on track and field and volleyball. But her sister, who is also her best friend, has a physical disability. That spurred Kathleen, an MIT senior majoring in urban studies and planning, to come up with a new kind of competition.

“I thought, what is there for people with brilliant minds who don’t compete in sports?” she says. “They should be able to compete somehow and be able to have that amazing moment of winning something or the thrill of belonging to a team.”

That desire to create more inclusive activities and learning environments has guided much of Kathleen’s life from a young age. In the past few years, she’s started sharing her vision across the globe — through MIT, she’s been to 22 countries.

International relations and conflicts are also significant areas of interest for Schwind. As part of a five-year program in the Department of Urban Studies and Planning (DUSP), she will receive a master’s degree in city planning along with her bachelor’s degree next spring, and her thesis focuses on the role of water in the Israel/Palestine conflict.

Through MIT International Science and Technology Initiatives (MISTI), Kathleen spent a summer in Singapore doing research and collaborating with Singaporean students as part of an international leadership program. She also traveled to El Salvador her sophomore year to teach students how to fly, build, and repair drones for urban planning; spent a winter in Spain and another in England studying art and literature; and again through MISTI will spend this January leading a teaching team in Israel.

She has also represented MIT at two United Nations events in Ecuador and Malaysia. And, as far as she’s concerned, that’s just the beginning.

Inspired to create competitions that weren’t dependent on physical ability, Kathleen was in fifth grade when she started the Gifted and Talented Education (GATE) Olympics. It was a competition consisting of giant mazes and puzzles, in which teams of elementary school students could decide what roles to play, how to budget time, and problem solve in order to complete as many challenges as possible in a given time period.

“People started skipping sports matches to come to the GATE Olympics instead,” she says. “Nothing against sports — I’ve played sports all my life — but it was a fun thing to see that, wow people are actually starting to celebrate academics alongside sports.”

Kathleen was in high school when she heard about another academically based competition, an event called the Science Bowl. In this Jeopardy!-style competition, two teams of four face off, and each team member has a buzzer in front of them. Whoever could get the buzzer-beating answer for each science question would get a number of points, and a bonus questions with its own points.

“I thought ‘this would be an awesome continuation of my vision for more fun academic competitions,’” she says.

No one her age had ever organized this kind of event before — they were usually put on by universities or labs. As a junior in high school, she logged her required driving hours for her learner’s permit while journeying around four regions in California to coordinate starting a Science Bowl.

Her persistence paid off. In the first year, hers was the second largest middle school Science Bowl in the state of California. And it’s still going — she continued running it through her first year at MIT before passing it off to California Polytechnic at San Luis Obispo. After arriving at MIT, she noticed that there wasn’t a Science Bowl in Massachusetts either — so she organized one. Now, it covers the four states of Massachusetts, Vermont, New Hampshire, and Maine, and is sponsored by MIT’s School of Science and by People Making a Difference. It’s the only student-run Science Bowl in the nation.

Growing up, Kathleen had an amazing physics teacher. In an equipment-filled classroom, he taught students to solve problems in creative, hands-on ways — and she loved that.

“That’s one of the reasons why I wanted to come to MIT, because I heard that it was a place filled with people who love thinking creatively and are not afraid of tackling huge problems,” she says.

One way to solve hard problems, Kathleen discovered, was by negotiating. She’d had to negotiate before — for example, when working to provide lunches for all the participants in the GATE Olympics — but her passion for it bloomed during her courses at MIT.

After taking 11.011 (The Art and Science of Negotiation) in the spring of her first year, Schwind became a teaching assistant for the course the next semester, becoming DUSP’s first undergraduate teaching assistant. She also helped to create both 11.111 (Leadership in Negotiation: Advanced Applications) and the department’s concentration in leadership and negotiation. She even negotiated the copyright permissions for an MIT eBook that she had contributed content to.

Serving in these roles “was a really fun way to learn a lot about what students were doing here at MIT — and they’re all doing such cool things — and to get to see another side of negotiation as well,” she says.

A world of possibilities

With organizing a Science Bowl spanning four states, and crisscrossing the globe, Schwind is a little short on spare time. But in the moments she has, she loves spending time outdoors sailing, hiking, fishing, and playing beach volleyball. She says that probably her favorite thing is spending time with her family.

“Spending time with them, if I had a day to do anything, that’s what I would do,” she says.

Schwind is the president of the Student Alumni Association, an MIT Burchard and Fung Scholar, and she also works on the Margaret MacVicar Memorial AMITA Oral History Project, in which she interviews MIT alumnae to collect their stories. She continues be actively involved with the Coca Cola Scholars Foundation, from which she received a scholarship in high school for being an agent of positive change in her community. As an homage to the Coca Cola Scholars network, she keeps a vintage Coke bottle on her desk.

As for her future, Schwind is keeping her options open. She’s been admitted to the University of Cambridge in the U.K., for an MPhil in international relations and politics, and intends to go to business school or law school after that. Eventually, she would love to work in foreign policy, perhaps for the State Department, the United Nations, or the White House.

“A good negotiator can be exactly who you are"