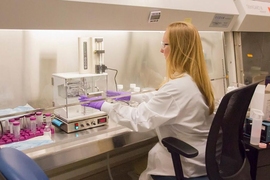 ↓ Download Image
Caption: MIT spinout Sigilon Therapeutics has partnered with pharmaceutical giant Eli Lilly and Company to develop implantable medical devices that act like “living drug factories,” encapsulating engineered cells that live in the body for months, or years, and produce insulin. Down the road, cells may also be engineered to secrete other hormones, proteins, and antibodies.

Caption:
MIT spinout Sigilon Therapeutics has partnered with pharmaceutical giant Eli Lilly and Company to develop implantable medical devices that act like “living drug factories,” encapsulating engineered cells that live in the body for months, or years, and produce insulin. Down the road, cells may also be engineered to secrete other hormones, proteins, and antibodies.

Patients with diabetes generally rely on constant injections of insulin to control their disease. But MIT spinout Sigilon Therapeutics is developing an implantable, insulin-producing device that may one day make injections obsolete.

Sigilon recently partnered with pharmaceutical giant Eli Lilly and Company to develop “living drug factories,” made of encapsulated, engineered cells that can be safely implanted in the body, and produce insulin over the course of months or even years. Down the road, cells may also be engineered to secrete other hormones, proteins, and antibodies.

The technology at Sigilon — based on research performed over the last decade at MIT — has led to creation of a device that encases cells and protects them from the patient’s immune system. This can be combined with engineered cells that produce a target therapeutic, such as insulin. The devices are tiny hydrogel beads, about 1 millimeter in diameter, that can be implanted into the patient through minimally invasive procedures.

“This allows us to have ‘living drug factories’ inside our bodies that can deliver therapeutics, at the right amount and in the right location, as needed,” says co-founder and co-inventor Daniel G. Anderson, an associate professor in MIT’s Department of Chemical Engineering, Institute for Medical Engineering and Science, and Koch Institute For Integrative Cancer Research. “The hope is that this living device can be placed in a patient, avoid the need for immune-suppression, and provide long-term therapy.”

Today, most patients with diabetes will prick their fingers several times a day to draw blood and test blood-sugar levels. When needed, they’ll inject insulin. It’s an effective treatment but is often dosed incorrectly, leading to uncontrolled blood sugar levels. “Even the most careful, hard-working diabetics have trouble doing it right, so they will often find their blood sugar is too high or too low,” Anderson says.

Another promising treatment, called cell therapy, has been around for decades. In this treatment, a patient receives transplanted human cells that secrete a protein, hormone, or other agent that’s needed to fight a disease or that the patient’s bodies can’t produce. Patients with diabetes, for instance, receive transplanted pancreatic beta cells, from cadavers, which sense blood sugar levels and produce insulin in response.

Some patients using this approach get long-term control of blood-sugar levels, and no longer need to inject insulin, Anderson says. However, these patients have to take immune suppressants, or their immune systems will reject and kill the foreign cells.

In more recent years, researchers have focused on cell encapsulation, surrounding transplanted cells in a thin polymer film to ward off the immune response but still nourish the cells. Such therapies have shown potential to treat cancer, heart failure, hemophilia, glaucoma, and Parkinson’s disease, among other diseases and conditions. But, so far, no treatments have made it to market.

In the mid-2000s, Julia Greenstein of the Juvenile Diabetes Research Foundation (JDRF) reached out to the MIT team for help developing new technological approaches toward islet cell encapsulation. This collaboration resulted in funding from JDRF and the Leona M. and Harry B. Helmsley Charitable Trust to MIT and Children’s Hospital Boston, to develop commercially viable cell-encapsulation technology for diabetes.

The issue was identifying the right material that protected cells but made them, essentially, invisible to the immune system. Most materials placed in the body lead to scar tissue accumulation, a process called “fibrosis.” When medical devices are covered in scar tissue, for instance, they become isolated from the body, which can block transfer of insulin and cause encapsulated cells to die.

The answer was to chemically modify alginate, a polysaccharide that lines the cell walls of brown algae. When combined with water, alginate can also be made into a gel that can safely encapsulate cells without limiting function. However, the researchers had to ensure the coating would not cause fibrosis. To do so, they attached different molecules to the alginate’s polymer chain, chemically modifying the structure hundreds of times until they found a version that didn’t provoke an immune response.

The end result: “A hydrogel that keeps cells alive and is permeable so that sugar and nutrients can come in and insulin can come out, but still blocks cellular elements of the immune system, like T cells, which can destroy the therapeutic cells inside,” Anderson says.

In three studies, published in Nature Materials in 2015 and in Nature Medicine and Nature Biotechnology in 2016, the researchers implanted cells encapsulated in their hydrogel into animals. They found the cells immediately produced therapeutic amounts of insulin in response to blood sugar levels and kept blood sugar under control over the course of a six-month study. They also found that small capsules of the hydrogel implanted in the subjects, which didn’t contain engineered cells, prevented fibrosis.

“There had been a growing collection of scientific work, taking different approaches to this problem,” Anderson says. “The key challenge was finding materials that avoid scar tissue formation.”

Langer and Anderson launched Sigilon to commercialize the technology by setting up Sigilon headquarters in Cambridge, Massachusetts, with more than $23 million in venture capital.

In early April, Sigilon partnered with Lilly, a worldwide leader in diabetes care, to use Sigilon’s encapsulation technology, called Afibromer, to develop a treatment for type 1 diabetes. Under the agreement, Sigilon will receive an upfront payment of $63 million, an equity investment, and more than $400 million in milestone payments to take the Afibromer devices containing stem-cell-derived pancreatic beta cells through clinical trials.

But that’s just the beginning, Anderson says. “Lilly is a major player in diabetes treatment, and we will take this forward [to treat diabetes],” he says. “But we see this as technology that can be used for many applications.”

Sigilon is working on various other applications, including “sense and respond” therapies, where cells sense biological signals and respond with precise dosage of a target therapeutic. Engineered cells could, for instance, secrete proteins to treat lysosomal storage diseases, where patients lack enzymes to break down lipids or carbohydrates; treat hemophilia with hormone release; or respond to inflammatory mediators with anti-inflammatory proteins.

In the future, Sigilon’s polymer could also be modified as a coating for implanted medical devices, such as coronary stents or insulin pumps. “Wires and shunts and pumps all have problems with scar tissue formation,” Anderson says. “The more we connect things with the body, the more important it will be to have materials that can avoid fibrosis.”