Opportunities and new challenges were at the forefront of discussions about the MIT Stephen A. Schwarzman College of Computing.
Peter Dizikes | MIT News Office
Publication Date:
Press Inquiries 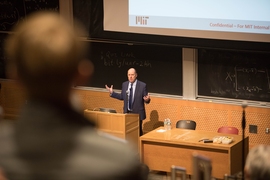 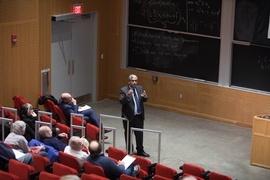 Since announcing the MIT Stephen A. Schwarzman College of Computing, Institute leaders have reached out to the campus and alumni communities in a series of forums, seeking ideas about the transformative new entity that will radically integrate computing with disciplines throughout MIT.

MIT Provost Martin A. Schmidt and Dean of the School of Engineering Anantha P. Chandrakasan engaged with students, faculty, and staff at forums on campus, where they presented outlines of the project and received dozens of public comments and questions. Additionally, Chandrakasan and Executive Vice President and Treasurer Israel Ruiz engaged with alumni in two webcast sessions that featured Q&A about the college.

“Creating this new college requires us to think deeply and carefully about its structure,” Schmidt said at a forum for faculty on Oct. 18. That process should be firmly connected to the ideas and experiences of the MIT community as a whole, he said further at a student forum on Oct. 25, adding that the goal was to “engage you in the process of building the college together.”

The discussions at the forums each had a slightly different flavor, generally reflecting the perspectives of the participants. The faculty forum, for instance, included professors from several fields concerned about maintaining a solid balance of disciplinary research at MIT.

The responsibilities of professors at the new college have yet to be fully defined. Many faculty will have joint appointments between the MIT Schwarzman College of Computing and existing MIT departments, an approach that both Schmidt and Chandrakasan acknowledged has had varying results in the past. As participants noted, some MIT faculty with joint appointments have thrived, but others have floundered, being pulled in different scholarly and administrative directions.

“We need to figure out how to make dual appointments work,” Chandrakasan said. Still, he noted that the “cross-cutting” structure of the college had enormous potential to integrate computing into the full range of disciplines at the Institute.

At a standing-room-only forum for MIT staff members on Oct. 25, with people lining the walls of Room 4-270, audience members offered comments and questions about the college’s proposed main building, MIT’s computing infrastructure, teaching, advising, the admissions process, and the need to hire motivated staff in the college’s most formative stages.

“It’s an opportunity to really do a whole-of-Institute solution to this challenge,” Schmidt said. “It’s going to test us.”

Multiple people at the student forum on Oct. 25 called for diversity among the college’s new faculty — a view Schmidt and Chandrakasan readily agreed with. The Institute leaders also emphasized the expansion of opportunities the college will provide for students, including more joint programs and degrees, and more student support.

At all three on-campus forums, audience participants commented upon the value of having Institute supporters share MIT’s goal of creating a “better world.” At the staff forum, one audience member advocated that MIT only accept funding from backers who were fully committed to democracy, and questioned the Institute’s connections with Saudi Arabia. Schmidt noted that MIT — as it has publicly announced — is currently reassessing MIT’s Institute-level engagements with entities of the Kingdom of Saudi Arabia.

At the student forum, audience members also raised queries about MIT’s mission and its relationships with donors; the issues cited included the precedent of naming the college after an individual, and the extent of MIT’s due diligence process during the creation of the college. Schmidt said the Institute had performed its due diligence well and developed the idea of the named college after extensive discussions; he also noted that faculty and students of the college would be able to develop a full range of intellectual and academic projects freely.

Audience members also stressed the generalized need to think critically about the impact of technology on society at a moment of social, political, and ecological uncertainty — and expressed a preference for the college to integrate ethics into its curriculum.

“This presents a real opportunity to get at that,” Chandrakasan responded.

On Oct. 30, the Alumni Association hosted two webcasts that featured Q&A with Chandrakasan and Ruiz. Over 1,000 alumni from around the world registered for the virtual conversations, which were moderated by Vice President for Communications Nate Nickerson. Questions centered on how the cross-disciplinary aspirations of the college would find life, and on how ethics will be made to infuse the college and shape its graduates. In both sessions, alumni asked how they can participate in the pursuit of the college’s mission. “The alumni will be critical to our efforts,” said Ruiz. “They offer us great wisdom as we form the college, and they will serve as important points of connection for our faculty and students as they seek to understand all the ways that computing is shaping our world.”

The college is being developed thanks to a $350 million foundational gift from Mr. Schwarzman, the chairman, CEO, and co-founder of Blackstone, a leading global asset manager. It will serve as an interdisciplinary hub for research and teaching across all aspects of computing, while strengthening links between computing and other scholarly pursuits.

“The college has two goals,” said Chandrakasan at the forum for MIT staff members. “One is to advance computing, and one is to link computing to other other [fields]. … This allows us to optimize, unbundle, and rebundle, to make computing much more integrated across all disciplines.”

It also presents new organizational challenges. For decades, MIT has been largely organized around its five schools, which focus on engineering; science; architecture and planning; humanities, arts, and social sciences; and management. But as Chandrakasan emphasized in all three campus forums, the MIT Schwarzman College of Computing is intended to develop connections with all of those schools as well as other stand-alone institutes and programs on campus.

“This is about helping advance every department,” said Chandrakasan, who frequently referred to the importance of the college’s “bridge” function, meaning it can span the width of MIT to link students, faculty, and resources together.

For his part, Schmidt emphasized at the events that the college will accelerate the current trend in disciplinary transformation. He noted that the fields of economics and urban studies at MIT have both recently created joint degrees with computer science as a natural response to the ways data and computing power have enabled new modes of academic research.

The foundational gift is part of a $1 billion commitment MIT has made to the new college, which will be centered in a new campus building, include 50 new faculty and allow the Institute to create a new series of collaborative, interdisciplinary enterprises in research and education. The college is meant to address all aspects of computing, including the policy and ethical issues surrounding new technologies.

“Across the Institute there is great enthusiasm for this,” Chandrakasan added.

“A unique opportunity to evolve”

The MIT Schwarzman College of Computing is intended to open in the fall of 2019 and will be housed partly — but not entirely — in its new building. The timeline, Chandrakasan acknowledged, is “super-aggressive.”

Schmidt and Chandrakasan noted that many important issues were yet to be resolved. As part of the process of developing the college, the Institute is creating a task force and working groups to assess some of the critical issues MIT faces.

Some audience members at the forums also questioned why MIT would announce the creation of its new college at a time when some of the entity’s institutional features are unresolved. In response, Schmidt noted that the Institute benefits by being on the leading edge of computing, and that the creation of the college will only enhance that position. Community engagement, he noted, would help the Institute finalize its vision for the college.

“We’re not going to be able to answer all of [your] questions,” Schmidt said at the staff forum. To gain traction on unresolved matters, he added, “We think the task force model is an appropriate one.”

MIT intends to hire a dean for the college and begin the search process for new faculty during the current academic year. There are a few campus sites being considered as the location for the college’s main building, but not all elements of the college will be located in that building.

Overall, Schmidt concluded, the creation of the college has presented MIT with a unique opportunity to evolve in response to the prevalence of computing and its influence in so many spheres of life.

“Every campus in the country today has been grappling with the need,” Schmidt said. “We feel that MIT has come forward with a really compelling solution.”

FAQ on the newly established MIT Stephen A. Schwarzman College of Computing