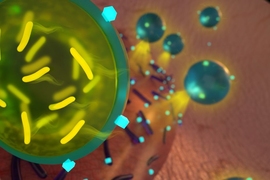 ↓ Download Image
Caption: MIT chemical engineers have devised a way to encapsulate probiotics so that they can be delivered along with antibiotics to kill multiple strains of bacteria.
Credits: Image: Ryan Allen

Caption:
MIT chemical engineers have devised a way to encapsulate probiotics so that they can be delivered along with antibiotics to kill multiple strains of bacteria.
Credits:
Image: Ryan Allen

Caption:
At left, spheres of alginate with probiotics encapsulated inside. At right, a close-up of a single sphere, with probiotic bacteria labeled in green.
Credits:
Courtesy of the researchers

In the fight against drug-resistant bacteria, MIT researchers have enlisted the help of beneficial bacteria known as probiotics.

In a new study, the researchers showed that by delivering a combination of antibiotic drugs and probiotics, they could eradicate two strains of drug-resistant bacteria that often infect wounds. To achieve this, they encapsulated the probiotic bacteria in a protective shell of alginate, a biocompatible material that prevents the probiotics from being killed by the antibiotic.

“There are so many bacteria now that are resistant to antibiotics, which is a serious problem for human health. We think one way to treat them is by encapsulating a live probiotic and letting it do its job,” says Ana Jaklenec, a research scientist at MIT’s Koch Institute for Integrative Cancer Research and one of the senior authors of the study.

If shown to be successful in future tests in animals and humans, the probiotic/antibiotic combination could be incorporated into dressings for wounds, where it could help heal infected chronic wounds, the researchers say.

Robert Langer, the David H. Koch Institute Professor and a member of the Koch Institute, is also a senior author of the paper, which appears in the journal Advanced Materials on Oct. 17. Zhihao Li, a former MIT visiting scientist, is the study’s lead author.

The human body contains trillions of bacterial cells, many of which are beneficial. In some cases, these bacteria help fend off infection by secreting antimicrobial peptides and other compounds that kill pathogenic strains of bacteria. Others outcompete harmful strains by taking up nutrients and other critical resources.

Scientists have previously tested the idea of applying probiotics to chronic wounds, and they’ve had some success in studies of patients with burns, Li says. However, the probiotic strains usually can’t combat all of the bacteria that would be found in an infected wound. Combining these strains with traditional antibiotics would help to kill more of the pathogenic bacteria, but the antibiotic would likely also kill off the probiotic bacteria.

The MIT team devised a way to get around this problem by encapsulating the probiotic bacteria so that they would not be affected by the antibiotic. They chose alginate in part because it is already used in dressings for chronic wounds, where it helps to absorb secretions and keep the wound dry. Additionally, the researchers also found that alginate is a component of the biofilms that clusters of bacteria form to protect themselves from antibiotics.

“We looked into the molecular components of biofilms and we found that for Pseudomonas infection, alginate is very important for its resistance against antibiotics,” Li says. “However, so far no one has used this ability to protect good bacteria from antibiotics.”

For this study, the researchers chose to encapsulate a type of commercially available probiotic known as Bio-K+, which consists of three strains of Lactobacillus bacteria. These strains are known to kill methicillin-resistant Staphylococcus aureus (MRSA). The exact mechanism by which they do this is not known, but one possibility is that the pathogens are susceptible to lactic acid produced by the probiotics. Another possibility is that the probiotics secrete antimicrobial peptides or other proteins that kill the pathogens or disrupt their ability to form biofilms.

The researchers delivered the encapsulated probiotics along with an antibiotic called tobramycin, which they chose among other tested antibiotics because it effectively kills Pseudomonas aeruginosa, another strain commonly found in wound infections. When MRSA and Pseudomonas aeruginosa growing in a lab dish were exposed to the combination of encapsulated Bio-K+ and tobramycin, all of the pathogenic bacteria were wiped out.

“It was quite a drastic effect,” Jaklenec says. “It completely eradicated the bacteria.”

When they tried the same experiment with nonencapsulated probiotics, the probiotics were killed by the antibiotics, allowing the MRSA bacteria to survive.

“When we just used one component, either antibiotics or probiotics, they couldn’t eradicate all the pathogens. That’s something which can be very important in clinical settings where you have wounds with different bacteria, and antibiotics are not enough to kill all the bacteria,” Li says.

The researchers envision that this approach could be used to develop new types of bandages or other wound dressings embedded with antibiotics and alginate-encapsulated probiotics. Before that can happen, they plan to further test the approach in animals and possibly in humans.

“The good thing about alginate is it’s FDA-approved, and the probiotic we use is approved as well,” Li says. “I think probiotics can be something that may revolutionize wound treatment in the future. With our work, we have expanded the application possibilities of probiotics.”

In a study published in 2016, the researchers demonstrated that coating probiotics with layers of alginate and another polysaccharide called chitosan could protect them from being broken down in the gastrointestinal tract. This could help researchers develop ways to treat disease or improve digestion with orally delivered probiotics. Another potential application is using these probiotics to replenish the gut microbiome after treatment with antibiotics, which can wipe out beneficial bacteria at the same time that they clear up an infection.

Li’s work on this project was funded by the Swiss Janggen-Poehn Foundation and by Beatrice Beck-Schimmer and Hans-Ruedi Gonzenbach.

A study by MIT researchers successfully eradicated two strains of drug-resistant bacteria using encapsulated probiotics and antibiotics, writes UPI reporter Allen Stone. The researchers believe “these probiotics can replenish the gut microbiome after treatment with antibiotics,” and they hope to use this method to develop new types of bandages.