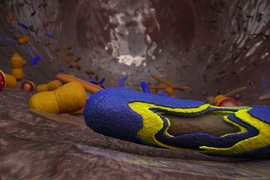 ↓ Download Image
Caption: A team of MIT scientists has developed a strategy for delivering large numbers of beneficial bacterial to the human gut. The strategy involves coating bacteria with polymer layers that protect them from the acids and bile salts found in the digestive tract.

Caption:
A team of MIT scientists has developed a strategy for delivering large numbers of beneficial bacterial to the human gut. The strategy involves coating bacteria with polymer layers that protect them from the acids and bile salts found in the digestive tract.
Credits:
Image: Second Bay Studios

The human digestive tract contains trillions of bacteria, many of which help digest food and fight off harmful bacteria. Recent studies have shown that some of these bacteria may influence, for better or worse, human diseases such as diabetes, heart disease, and cancer.

As scientists have learned more about these bacteria, many have raised the possibility that manipulating these populations, known collectively as the microbiome, could improve human health.

Looking toward that future, a team of MIT scientists has developed a strategy for delivering large numbers of beneficial bacterial to the human gut.

“Once the microbiome is better understood, we can use this delivery platform to target certain areas and introduce certain species there,” says Ana Jaklenec, a research scientist at MIT’s Koch Institute for Integrative Cancer Research and one of the senior authors of a paper describing this approach in the Sept. 12 issue of the journal Advanced Materials.

Jaklenec and colleagues developed a way to coat bacteria with polymer layers that protect them from the acids and bile salts found in the digestive tract. When the microbes reach the intestine, they attach to the intestinal lining and begin reproducing.

“The bacteria are delivered and they adhere to the intestinal wall, where they survive much better than noncoated bacteria,” says Koch Institute postdoc Aaron Anselmo, the paper’s first author.

Robert Langer, the David H. Koch Institute Professor at MIT and a member of the Koch Institute, is also a senior author of the paper. Other authors are postdoc Kevin McHugh and technical assistant Jamie Webster.

Doctors sometimes recommend beneficial bacteria, also known as probiotics, for patients suffering from GI illnesses such as colitis and Crohn’s disease. However, these over-the-counter probiotic supplements may contain varying amounts of bacteria, and may include cells that are no longer viable. Furthermore, these probiotics have no protective coating, so they can be damaged by acid in the stomach before reaching the intestines.

The MIT team decided to try coating bacterial cells with thin layers of polysaccharides, or sugars. They chose two biodegradable polysaccharides known as chitosan and alginate, which have been previously used in other oral delivery technologies. These polysaccharides are known to be mucoadhesive, meaning that they will stick to the mucosal lining of the intestines.

In this study, the researchers demonstrated their technique with a strain of bacteria known as Bacillus coagulans, which is sometimes used to treat colitis and irritable bowel syndrome. This strain is not normally found in the human gut but helps to alleviate abdominal pain and bloating by producing lactic acid.

“It’s a reasonably gentle process, so you’re not destroying the bacteria,” Jaklenec says.

This results in a very thin, gel-like coating that individually encapsulates each bacterial cell. In tests in mice, the researchers showed that this coating protects the cells from acid in the stomach, as well as bile salts. Once the cells reach the intestines, they settle in and begin replicating. The researchers found that the coated bacteria had a survival rate six times greater than that of uncoated bacteria.

"Increasingly, scientists are learning that the microbiome plays an important role in many diseases, yet the technological tools to safely, effectively, and precisely engineer the microbiome are lacking. This research may help in this effort by creating delivery vehicles that can more effectively shuttle desirable probiotics safely through stomach acid and bile salts to reach the intestines, with the potential to modify human disease,” says Jordan Green, an associate professor of biomedical engineering at the Johns Hopkins University School of Medicine, who was not involved in the research.

This kind of oral probiotic delivery could replace an experimental treatment known as fecal transplant, which is now in clinical trials to treat infections of Clostridium difficile, which can produce severe inflammation of the colon. Fecal transplant involves isolating beneficial bacteria from stool samples of healthy people and delivering them to a patient by enema or colonoscopy.

For medicinal use, the coated bacteria could be easily packaged into a capsule or made into a dried powder that could be mixed into a drink, the researchers say.

This strategy should work with any kind of bacteria that has a charged surface, whether positive or negative, and it could also work with other microbes such as yeast, the researchers say. They are now working on making the coatings responsive to acidity levels, which could make it easier to target them to other parts of the GI tract, such the colon. They are also interested in adapting this approach to deliver microbes to other parts of the body such as the skin or mouth.

Popular Science reporter Sarah Chodosh writes that MIT researchers have developed a strategy to deliver beneficial bacteria to the GI tract. The researchers used layers of different sugars "to coat individual cells of Bacillus coagulans, which is used to treat irritable bowel syndrome."