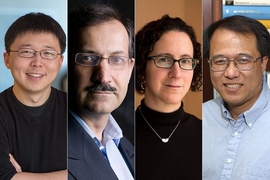 Four MIT faculty members have been elected to the National Academy of Sciences (NAS) in recognition of their “distinguished and continuing achievements in original research.”

MIT’s four new NAS members are: Amy Finkelstein, the John and Jennie S. MacDonald Professor of Economics; Mehran Kardar, the Francis Friedman Professor of Physics; Xiao-Gang Wen, the Cecil and Ida Green Professor of Physics; and Feng Zhang, the Patricia and James Poitras ’63 Professor in Neuroscience at MIT, associate professor of brain and cognitive sciences and of biological engineering, and member of the McGovern Institute for Brain Research and the Broad Institute

The group was among 84 new members and 21 new foreign associates elected to the NAS. Membership in the NAS is one of the most significant honors given to academic researchers.

Finkelstein is the co-scientific director of J-PAL North America, the co-director of the Public Economics Program at the National Bureau of Economic Research, a member of the Institute of Medicine and the American Academy of Arts and Sciences, and a fellow of the Econometric Society.

She has received numerous awards and fellowships including the John Bates Clark Medal (2012), the American Society of Health Economists’ ASHEcon Medal (2014), a Presidential Early Career Award for Scientists and Engineers (2009), the American Economic Association’s Elaine Bennett Research Prize (2008) and a Sloan Research Fellowship (2007). She has also received awards for graduate student teaching (2012) and graduate student advising (2010) at MIT.

She is one of the two principal investigators for the Oregon Health Insurance Experiment, a randomized evaluation of the impact of extending Medicaid coverage to low income, uninsured adults.

His expertise is in statistical physics, and he has lectured extensively on this topic at MIT and in workshops at universities and institutes in France, the U.K., Switzerland, and Finland. He is the author of two books based on these lectures. In 2018 he was recognized by the American Association of Physics Teachers with the John David Jackson Excellence in Graduate Physics Education Award.

Kardar is a member of the founding board of the New England Complex Science Institute and the editorial board of Journal of Statistical Physics, and has helped organize Gordon Conference and KITP workshops. His awards include the Bergmann memorial research award, the A. P. Sloan Fellowship, the Presidential Young Investigator award, the Edgerton award for junior faculty achievements (MIT), and the Guggenheim Fellowship. He is a fellow of the American Physical Society and the American Academy of Arts and Sciences.

He studied superstring theory under theoretical physicist Edward Witten at Princeton University and later switched his research field to condensed matter physics while working with theoretical physicists Robert Schrieffer, Frank Wilczek, and Anthony Zee in the Institute for Theoretical Physics at the University of California at Santa Barbara (1987–1989). He became a five-year member of the Institute for Advanced Study at Princeton University in 1989 and joined MIT in 1991. Wen is the Cecil and Ida Green professor of Physics at MIT, a Distinguished Moore Scholar at Caltech, and a Distinguished Research Chair at the Perimeter Institute. In 2017 he received the Oliver E. Buckley Condensed Matter Physics Prize of the American Physical Society.

Zhang is a bioengineer focused on developing tools to better understand nervous system function and disease. His lab applies these novel tools to interrogate gene function and study neuropsychiatric disorders in animal and stem cell models. Since joining MIT and the Broad Institute in January 2011, Zhang has pioneered the development of genome editing tools for use in eukaryotic cells — including human cells — from natural microbial CRISPR systems. He also developed a breakthrough technology called optogenetics with Karl Deisseroth at Stanford University and Edward Boyden, now of MIT.

Zhang joined MIT and the Broad Institute in 2011 and was awarded tenure in 2016. He received his BA in chemistry and physics from Harvard College and his PhD in chemistry from Stanford University. Zhang’s award include the Perl/UNC Prize in Neuroscience (2012, shared with Karl Deisseroth and Ed Boyden), the National Institutes of Health Director’s Pioneer Award (2012), the National Science Foundation’s Alan T. Waterman Award (2014), the Jacob Heskel Gabbay Award in Biotechnology and Medicine (2014, shared with Jennifer Doudna and Emmanuelle Charpentier), the Society for Neuroscience Young Investigator Award (2014), the Okazaki award, the Canada Gairdner International Award (shared with Doudna and Charpentier along with Philippe Horvath and Rodolphe Barrangou) and the 2016 Tang Prize (shared with Doudna and Charpentier).

Zhang is a founder of Editas Medicine, a genome editing company founded by world leaders in the fields of genome editing, protein engineering, and molecular and structural biology.