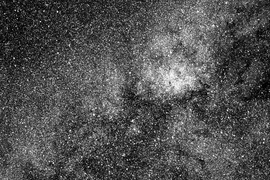 ↓ Download Image
Caption: This test image from one of the four cameras aboard the Transiting Exoplanet Survey Satellite (TESS) captures a swath of the southern sky along the plane of our galaxy. More than 200,000 stars are visible. The image, which is centered in the constellation Centaurus, includes dark tendrils from the Coal Sack Nebula and the bright emission nebula Ced 122 (upper right).The bright star at bottom center is Beta Centauri.
Credits: Image: NASA/MIT/TESS

Caption:
This test image from one of the four cameras aboard the Transiting Exoplanet Survey Satellite (TESS) captures a swath of the southern sky along the plane of our galaxy. More than 200,000 stars are visible. The image, which is centered in the constellation Centaurus, includes dark tendrils from the Coal Sack Nebula and the bright emission nebula Ced 122 (upper right).The bright star at bottom center is Beta Centauri.
Credits:
Image: NASA/MIT/TESS

Caption:
An artist’s illustration of TESS as it passed the moon during its lunar flyby. This provided a gravitational boost that placed TESS on course for its final working orbit.
Credits:
Image: NASA Goddard Space Flight Center

The following is adapted from a press release issued today by MIT and NASA's Goddard Space Flight Center.

NASA’s next planet hunter, the Transiting Exoplanet Survey Satellite (TESS), is one step closer to searching for new worlds after successfully completing a lunar flyby on May 17. The spacecraft passed about 5,000 miles from the moon, which provided a gravity assist that helped TESS sail toward its final working orbit.

As part of camera commissioning, the science team snapped a two-second test exposure using one of the four TESS cameras. The image, centered on the southern constellation Centaurus, reveals more than 200,000 stars. The edge of the Coalsack Nebula is in the right upper corner and the bright star Beta Centauri is visible at the lower left edge. TESS is expected to cover more than 400 times as much sky as shown in this image with its four cameras during its initial two-year search for exoplanets. A science-quality image, also referred to as a “first light” image, is expected to be released next month in June.

TESS will undergo one final thruster burn on May 30 to enter its science orbit around Earth. This highly elliptical orbit will maximize the amount of sky the spacecraft can image, allowing it to continuously monitor large swaths of the sky. TESS is expected to begin science operations in mid-June after reaching this orbit and completing camera calibrations. 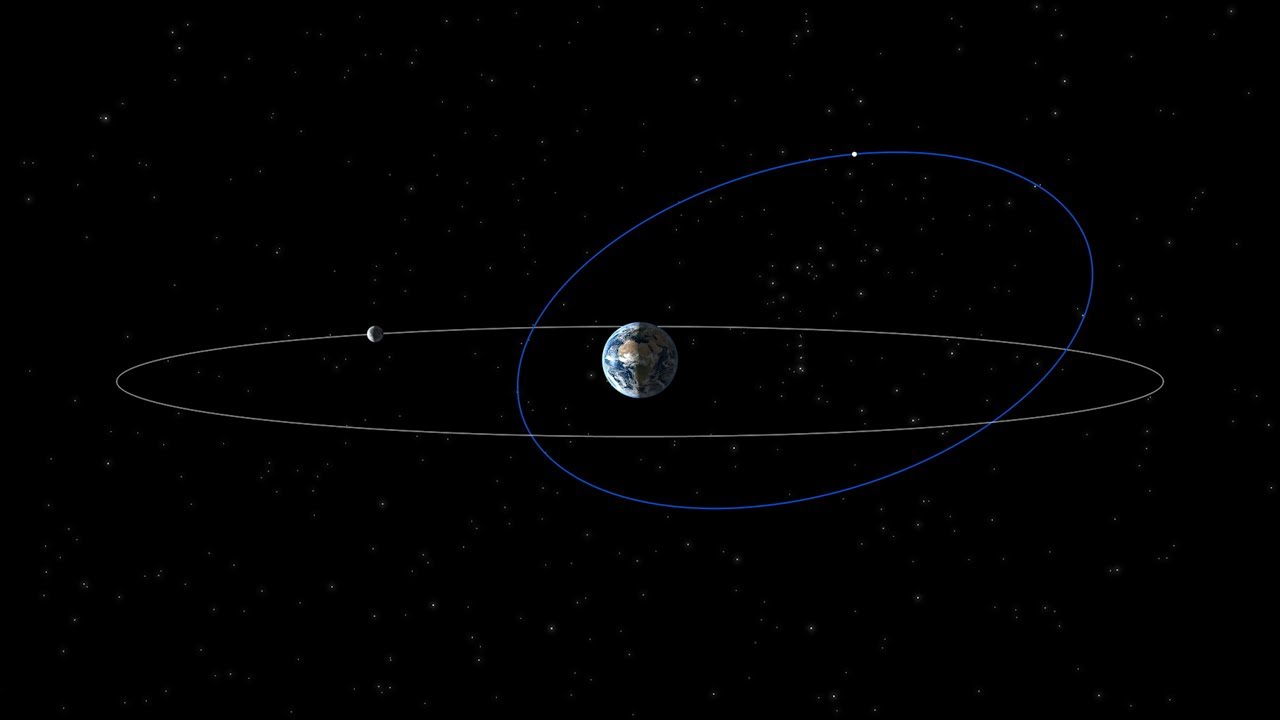 Play video
NASA's Transiting Exoplanet Survey Satellite — TESS — will fly in an orbit that completes two circuits around Earth every time the moon orbits once. This special orbit will allow TESS’s cameras to monitor each patch of sky continuously for nearly a month at a time.

Launched from Cape Canaveral Air Force Station on April 18, TESS is the next step in NASA’s search for planets outside our solar system, known as exoplanets. The mission will observe nearly the entire sky to monitor nearby, bright stars in search of transits — periodic dips in a star’s brightness caused by a planet passing in front of the star. TESS is expected to find thousands of exoplanets. NASA’s upcoming James Webb Space Telescope, scheduled for launch in 2020, will provide important follow-up observations of some of the most promising TESS-discovered exoplanets, allowing scientists to study their atmospheres.

TESS is a NASA Astrophysics Explorer mission led and operated by MIT in Cambridge, Massachusetts, and managed by NASA’s Goddard Space Flight Center in Greenbelt, Maryland. George Ricker of MIT’s Kavli Institute for Astrophysics and Space Research serves as principal investigator for the mission. Additional partners include Orbital ATK, NASA’s Ames Research Center, the Harvard-Smithsonian Center for Astrophysics, and the Space Telescope Science Institute. The TESS science instruments were jointly developed by MIT’s Kavli Institute for Astrophysics and Space Research and MIT’s Lincoln Laboratory. More than a dozen universities, research institutes, and observatories worldwide are participants in the mission.

NASA’s planet-hunting satellite TESS has “snapped its first test shot — an incredibly clear, star-studded image centered on the Southern constellation of Centaurus,” writes Bruce Dorminey for Forbes. “We are truly excited about how well the TESS cameras are working,” said George Ricker, the mission’s principal investigator and a senior research scientist at MIT’s Kavli Institute.

The Transiting Exoplanet Survey Satellite (TESS) took its first picture of the stars as it moved toward its final orbit, reports Brooks Hays of United Press International. “The plethora of stars in the image -- at least 2,000 of them -- showcases the broad perspective provided by TESS's four cameras,” writes Hays.