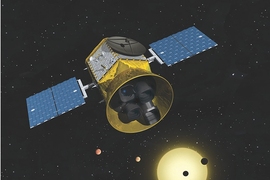 Following a three-year competition, NASA has selected the Transiting Exoplanet Survey Satellite (TESS) project at MIT for a planned launch in 2017. The space agency announced the mission — to be funded by a $200 million grant to the MIT-led team — this afternoon.

The project, led by principal investigator George Ricker, a senior research scientist at MKI, will use an array of wide-field cameras to perform an all-sky survey to discover transiting exoplanets, ranging from Earth-sized planets to gas giants, in orbit around the brightest stars in the sun’s neighborhood.

An exoplanet is a planet orbiting a star other than the sun; a transiting exoplanet is one that periodically eclipses its host star.

“TESS will carry out the first space-borne all-sky transit survey, covering 400 times as much sky as any previous mission,” Ricker says. “It will identify thousands of new planets in the solar neighborhood, with a special focus on planets comparable in size to the Earth.”

TESS relies upon a number of innovations developed by the MIT team over the past seven years. “For TESS, we were able to devise a special new ‘Goldilocks’ orbit for the spacecraft — one which is not too close, and not too far, from both the Earth and the moon,” Ricker says.

As a result, every two weeks TESS approaches close enough to the Earth for high data-downlink rates, while remaining above the planet’s harmful radiation belts. This special orbit will remain stable for decades, keeping TESS’s sensitive cameras in a very stable temperature range.

With TESS, it will be possible to study the masses, sizes, densities, orbits and atmospheres of a large cohort of small planets, including a sample of rocky worlds in the habitable zones of their host stars. TESS will provide prime targets for further characterization by the James Webb Space Telescope, as well as other large ground-based and space-based telescopes of the future.

“We’re very excited about TESS because it’s the natural next step in exoplanetary science,” Winn says.

“The selection of TESS has just accelerated our chances of finding life on another planet within the next decade,” Seager adds.

“NASA’s Explorer Program gives us a wonderful opportunity to carry out forefront space science with a relatively small university-based group and on a time scale well-matched to the rapidly evolving field of extrasolar planets,” says Jackie Hewitt, a professor of physics and director of the Kavli Institute for Astrophysics and Space Research. “At MIT, TESS has the involvement of faculty and research staff of the Kavli Institute, the Department of Physics, and the Department of Earth, Atmospheric, and Planetary Sciences, so we will be actively engaging students in this exciting work.”

Previous sky surveys with ground-based telescopes have mainly picked out giant exoplanets. NASA’s Kepler spacecraft has recently uncovered the existence of many smaller exoplanets, but the stars Kepler examines are faint and difficult to study. In contrast, TESS will examine a large number of small planets around the very brightest stars in the sky.

“The TESS legacy will be a catalog of the nearest and brightest main-sequence stars hosting transiting exoplanets, which will forever be the most favorable targets for detailed investigations,” Ricker said.

The other mission selected today by NASA is the Neutron Star Interior Composition Explorer (NICER). It will be mounted on the International Space Station and measure the variability of cosmic X-ray sources, a process called X-ray timing, to explore the exotic states of matter within neutron stars and reveal their interior and surface compositions. NICER’s principal investigator is Keith Gendreau of NASA’s Goddard Space Flight Center in Greenbelt, Md. The MKI group, lead by Ricker, is also a partner in the NICER mission.

“The Explorer Program has a long and stellar history of deploying truly innovative missions to study some of the most exciting questions in space science,” John Grunsfeld, NASA’s associate administrator for science, said in the space agency’s statement today. “With these missions we will learn about the most extreme states of matter by studying neutron stars and we will identify many nearby star systems with rocky planets in the habitable zone for further study by telescopes such as the James Webb Space Telescope.”

The Explorer Program is NASA’s oldest continuous program and has launched more than 90 missions. It began in 1958 with the Explorer 1, which discovered the Earth’s radiation belts. Another Explorer mission, the Cosmic Background Explorer, led to a Nobel Prize. NASA’s Goddard Space Flight Center manages the program for the agency’s Science Mission Directorate in Washington.